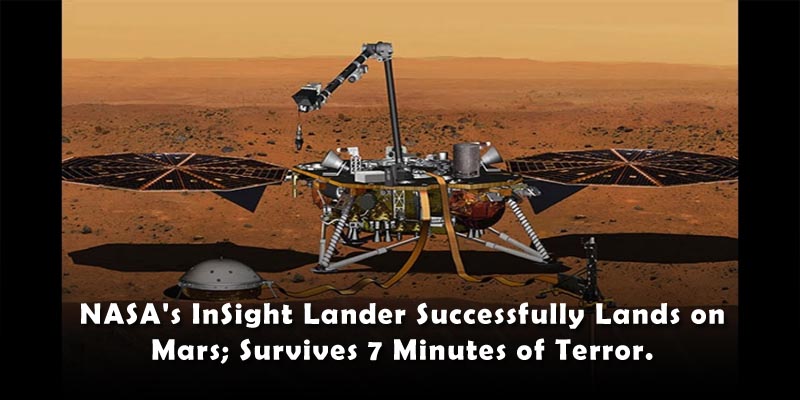 The landing was very critical and rather hard ; according to NASA engineers  the Mars landing was preceded by “seven minutes of terror” as the robot had to rapidly decelerate from a speed of 12,300 mph to mere 5 mph. This landing attempt is a first for NASA’s six years.

National Space Agencies from around the Globe have made 44 attempts to land on the Red Planet Previously. Out of which on 18 were successful.

NASA’s InSight lander before touching down on the surface of Mars. (ASSOCIATED PRESS)

Vice President of the USA took to Twitter to applaud NASA’s “Incredible Milestone.”

Congratulations to @NASA, @LockheedMartin, @ulalaunch, & all who made today’s @NASAInSight #MarsLanding possible! This marks the 8th time the US has landed on Mars & the 1st mission to study its deep interior. Incredible milestone! https://t.co/plgJch3Vpc

Once successfully landed on the surface of Mars. The InSight will start to probe into Mars subsurface; giving researchers the first exclusive looked into the Red Planet’s internal strata.

“We’ve studied Mars from orbit and from the surface since 1965, learning about its weather, atmosphere, geology and surface chemistry,Now we finally will explore inside Mars and deepen our understanding of our terrestrial neighbor as NASA prepares to send human explorers deeper into the solar system.”

The robot’s journey onto the surface of the Red Planet was quite daunting  for the team of scientists and engineers, who virtually had no control of it had entered Mars’ atmosphere.

A mere two hours before the NASA InSight started its descent towards landing, the EDL team made some last minute adjustments to the spacecraft’s flight path.