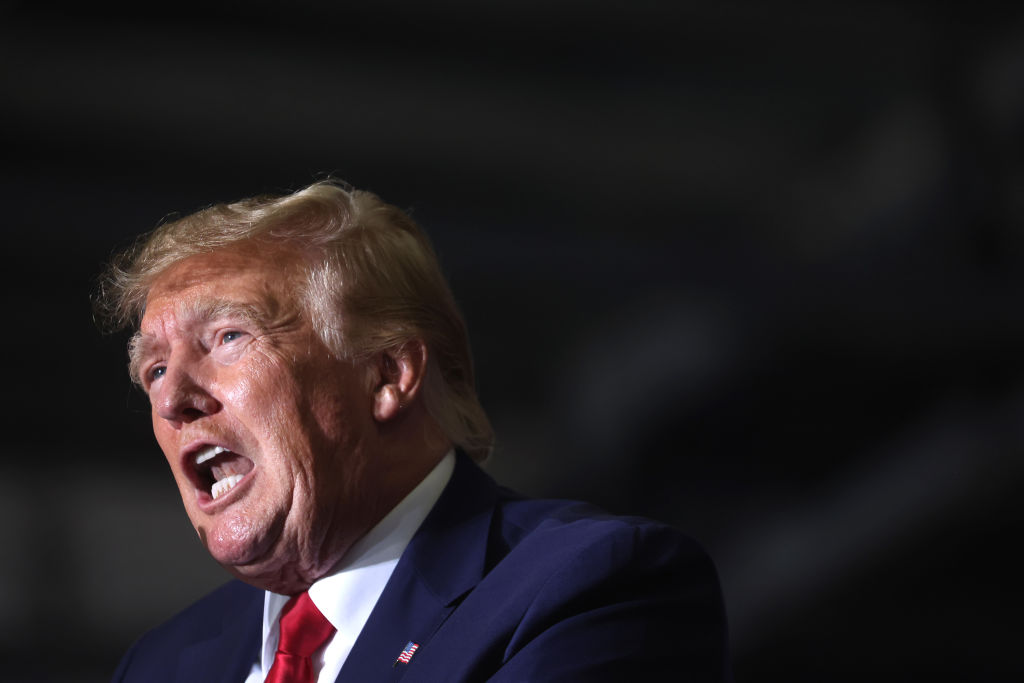 PALM BEACH, Fla. — Standing before a crowd of political advisers — well-heeled donors in metallic designer dresses, longtime Palm Beach friends and Fox News stars past and present — former President Donald Trump couldn’t hide his pleasure with the reception he was getting.

Ushered through the doors, he’d been met with a standing ovation, head nods and adoring smiles, the type of response he’s come to expect from the crowds that gather at his palatial Mar-a-Lago resort on the Florida coast. They were there, clustered together at white-tablecloth spreads under glittering chandeliers, to debut a movie meant to cast a shadow on the 2020 election results, but also to see Trump himself. Even in a slightly politically weakened state, he remains the axis around which the Republican Party revolves.

As he spoke, however, a tension became apparent in the room. Trump and his aides and allies may be living up the moment. Some may have their eyes on the potential of a presidential run in 2024. But on Tuesday night, like many others since Trump left the White House, they remained consumed by what happened in 2020.

“There’s a great anger at what took place and because of a rigged election,” Trump said, standing inside a mirrored jewel box of a ballroom next to the pool. “We now have Ukraine — it would have never happened. We now have inflation the likes of which nobody ever thought possible.”

Trump is in limbo, needing to focus on the future but incapable of letting go of the past. It was evident all around him on Tuesday. Like a dysfunctional family reunion, Trump donors, allies, aides and advisers reminisced about days gone by. It was the old crew, there through times good and bad. Corey Lewandowski, once cast out of Trump’s circle over accusations he assaulted a donor’s wife, was greeted with open arms as he buzzed around the room. Hope Hicks, who shies away from the public eye, flitted from table to table, hugging old colleagues. And Reince Priebus maneuvered himself through friends as he held fizzy drinks for himself and Kellyanne Conway, who razzed him about how he would be remembered in her upcoming memoir.

That a memoir would be the vehicle of ribbing was fitting in a way. The currency of Trumpland is often grievance — dished out in a variety of forms, from the anonymous leak to the social media blast, to the dishy tell-all available for advance order on Amazon. And if it’s not directed at one another then it is focused predominantly on the 2020 election, which, against all prevailing evidence, Trump continues to insist was rigged against him alone.

“Mr. Boyle is allowed to roam — he is a guest,” a press wrangler said to the media, which was instructed to stay put in a roped-off corner.

Trump and his crew were gathered on Tuesday to see “Rigged: The Zuckerberg Funded Plot to Defeat Donald Trump,” a new documentary from Trump ally and Citizens United head Dave Bossie about the 2020 election that tries to draw a line between Facebook’s grant funding in certain parts of the country and Democratic turnout. Trump, who was interviewed for the film, along with a cast that includes former House Speaker Newt Gingrich and Sen. Ted Cruz (R-Texas), said he was eager to see how the flick came out.

“I really liked ‘Citizen Kane.’ ‘Gone With the Wind’ was fantastic. ‘Titanic’ was fantastic. But this is the one I’m really looking forward to seeing,” Trump said to the crowd gathered at his very own Xanadu.

The past had gripped him again, this time in cinematic form.

Those Republicans who support Trump but are one step away from his inner circle find the scene that unfolded Tuesday night to be counterproductive. At a time when the ex-president could be focused on propelling the Republican Party toward the upcoming elections, Trump is still anchored down by conspiracies and anger over losing the last one. At a time when President Joe Biden’s own weaknesses make him an easy political target, Trump and his political apparatus instead seem to be unable to move past the abyss of election-fraud lies.

“Some of the people here — not here, but maybe in the back corner there,” Bossie said, gesturing to a small group of reporters, “say that we shouldn’t be talking about 2020. I think it’s vital that we do. Because if we don’t find out what happened in 2020, how are we going to stop it from happening?”

Unlike some of the election-fraud conspiracies propagated by Trump and his allies, Bossie’s film examines the publicly documented $400 million that Facebook founder Mark Zuckerberg spent via the Chan Zuckerberg Initiative on the 2020 election in charitable giving. The film does not lay out any illegal activity but looks at the spending by two nonprofit organizations in places like Arizona and Georgia where Biden won by narrow margins.

Sophisticated graphics and ominous music are interwoven with soundbites from election-fraud backers like Cleta Mitchell, a Republican election lawyer who advised Trump on how to protest the 2020 results, and Trump, who claims Zuckerberg himself was working to make it “impossible for a Republican to win.” It all has a stiff whiff of nefariousness, except that it’s not unexplored ground. The Zuckerberg conspiracy has been around for months, with nothing untoward yet proven. In fact, election officials have said the funds were critical for ensuring they could operate under the crazy conditions of the pandemic. But it is the latest target by the right, with dozens of proposed bills in state legislatures now taking aim at outside donations for election purposes.

“In full transparency, Mark [Zuckerberg] and [his wife] Priscilla [Chan] announced their support for this effort well in advance of the election, so this documentary is neither new nor newsworthy,” said Brian Baker, a spokesperson for Zuckerberg and Chan, in a statement to Fox News last week. “This film … appears to feature the same people advancing the same claims that have been debunked by multiple federal and state courts and respected news organizations, only this time, set to dramatic music.”

The impacts of Trump’s eagerness to live in the realm of 2020 conspiracy are visible in obvious and subtle ways. There are the movies screened at Mar-a-Lago and the guests invited there, among them Mike Gableman, the former state Supreme Court justice leading Wisconsin’s GOP-ordered review into the 2020 election. There’s the fact that a large portion of Republicans continue to deny that Biden rightfully won the presidency, and that following the elections, at least eight Republican-controlled state legislatures actually passed bans on money given to election offices from outside organizations — an implicit reaction to Zuckerberg.

And then there is the talk around Trump’s own future. After the former president walked down a short velvet rope line, shaking hands and flashing his trademark thumbs-up, Bossie was asked why so much time and money is being spent talking about 2020 rather than laying out the case against Biden.

“We do plenty of that,” Bossie said. “We have to uncover what they did to do two things: make the American people understand that the president didn’t lose a fair election, and they changed the rules.”

But once Bossie had stepped away, one attendee, a political aide, came over to the news media to vent frustrations about the lack of a forward-looking vision, a change in course or plan of action to make sure a 2020 loss doesn’t happen for the Republican Party again.

“Until we have a reckoning and a conversation, I don’t know what we are doing here,” said the attendee, who like many of the guests in the room was well versed in talking to journalists and immediately asked to go on background to speak anonymously.