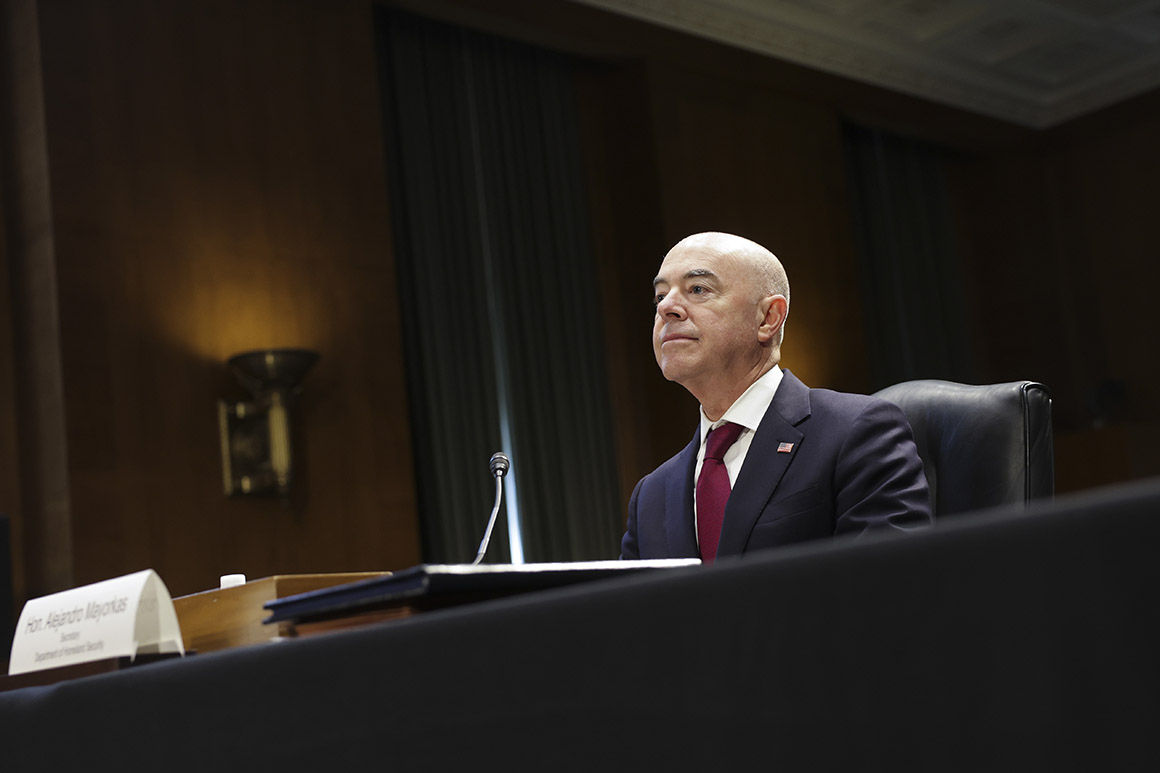 It started the way all Washington’s spiciest scandals start — with a departmental working group.

Over just a few days last week, the creation of a new board in the Department of Homeland Security generated an outcry on the right, from genteel retiring lawmakers to the loudest hosts on Fox News. It found its way to congressional Republicans’ oversight to-do lists. The secretary of Homeland Security was forced to address the allegations on multiple Sunday shows. And the board’s new executive director went very, very viral.

It was dramatic. But it didn’t start that way.

It hasn’t even convened its first meeting, but already the Disinformation Governance Board — a small group created to work on a complicated problem — has become a big headache.

The Senate confirmed Alejandro Mayorkas as DHS secretary on Feb. 2, 2021. In his confirmation hearing, held just two weeks after the Jan. 6 attack on the Capitol, he promised to take on domestic violent extremism, calling it “one of the greatest challenges that the Department of Homeland Security confronts.”

Early in Mayorkas’ tenure at DHS, his team saw that malicious internet activity fed virtually every problem the department faced, according to John Cohen, a top counterterrorism official in the department at the time who helped stand up the board. This activity took a host of shapes: domestic violent extremists threatening members of Congress, human smugglers enticing migrants by spreading lies about U.S. border policies to entice migrants, Russian intelligence officers posting false claims about U.S. elections, and so on.

DHS leadership stood up a working group on the issue, said Cohen, who left the department last month. That group was helmed by the Office of Policy and the Office of Intelligence and Analysis. Its members concluded last year that there wasn’t a mechanism to address the policies governing how these activities are coordinated across the sprawling department, Cohen said.

One particular concern was that some DHS components — like Immigration and Customs Enforcement — can legally go undercover online (for instance, to infiltrate a human smuggling organization’s chat group). But for others, like I&A, going undercover is prohibited. Were there policies in place to make sure that when different agencies within DHS shared information with each other, it was all done appropriately?

It’s Washington, so the working group concluded that there needed to be another new group working on these issues. Cohen wrote a memo describing a board that would do just that. He noted it’s no secret that the department has long grappled with how to fight disinformation, going as far back as Hurricane Sandy in 2012.

“They’re not sitting there saying, ‘Hey, what should we be doing about Russian disinformation focusing on X, Y, and Z?’” he told POLITICO. “They’re focusing on, ‘Hey, information is being gathered and collected under different sets of legal authorities. What is the appropriate way to share that information so we’re not in conflict with those legal authorities?’”

“It’s not a good use of time to be angry about the creation of a policy coordination group,” he added.

Earlier this year, department leadership decided to stand up the disinformation board, according to the DHS official. The pick for director was disinformation expert Nina Jankowicz, who managed programs for Russia and Belarus for the National Democratic Institute and has advised the Ukrainian government, according to her biography at the Wilson Center. She’s also written two books: How to Lose the Information War: Russia, Fake News, and the Future of Conflict; and How to Be a Woman Online: Surviving Abuse and Harassment, and How to Fight Back.

The DHS official told POLITICO that Jankowicz started at the department on March 2. In mid-April — after she started at DHS but before her hiring became public — she did an interview with NPR promoting her second book, which focuses on harassment women face online. A transcript of the interview dated April 16 describes her only as a “disinformation researcher,” and does not note that she works for DHS on internet-related issues.

“We need the platforms to do more, and we frankly need law enforcement and our legislatures to do more as well,” she told NPR.

An NPR spokesperson did not provide comment on its disclosure policies for guests.

On April 27, POLITICO’s Playbook newsletter broke the news of Jankowicz’s hiring, and of the board’s existence. That same day, in congressional testimony before a House Appropriations subcommittee, Mayorkas talked up the board as a major new step in the department’s fight against disinformation.

“We have just established a mis- and disinformation governance board in the Department of Homeland Security to more effectively combat this threat, not only to election security but to our homeland security,” he said.

It was an odd comment, given that DHS now says the board does not run or manage any department operations.

Jankowicz, meanwhile, immediately drew condemnation and guffaws on Twitter — mostly, but not entirely, from conservatives — for her commentary on disinformation, which included a cringe-worthy parody of a Mary Poppins song.

DHS was already playing defense. On May 2, the department released a brief fact sheet saying the board was set up “with the explicit goal” of ensuring that protections for Americans’ rights and privacy are “appropriately incorporated” across DHS’ disinformation-related work. The fact sheet noted the board also aims to help coordinate DHS’ work with other government agencies and “a diverse range of external stakeholders.” Reached for comment on this story, a DHS spokesperson pointed POLITICO to the fact sheet.

Republicans assumed the worst. Sen. Ron Johnson (R-Wis.), a member of the Senate Homeland Security committee, said the board “should frighten anyone who values liberty.” Sen. Rob Portman (R-Ohio), the top Republican on the same committee, said he was “deeply concerned” by the move. And Reps. John Katko (N.Y.) and Mike Turner (Ohio) — the top Republicans on the House Intelligence and House Homeland Security committees — fired off a letter to Mayorkas asking for a host of documents related to the board.

This weekend, Mayorkas made the rounds of the Sunday shows and tried to do some clean-up.

“We could have done a better job of communicating what it is and what it isn’t,” he said on NBC’s “Meet the Press.”

That was a bit of an understatement.

“They only have themselves to blame for this firestorm,” said Ben Wizner, director of the ACLU’s Speech, Privacy, and Technology Project. “They announced something with a creepy name and provided no information about the scope or authorities of the board.”

DHS officials will have ample opportunities to answer more questions in future Congressional hearings. Republicans plan to make the board a major focus if the House flips in November.

“Efforts are afoot to begin serious oversight of this,” said a Congressional Republican aide who works on investigations. “We see it as fundamentally un-American.”

The board’s defenders, meanwhile, plead innocence. The DHS official said nobody there expected the outcry against the board, and that they would have put more thought into its name if they’d had better foresight.

And, Cohen said, protecting Americans’ rights while combating disinformation is of paramount importance.

“There is no area of national security that isn’t impacted by this,” he said. “None.”