Obama to deliver warning of democracy’s peril against twin backdrops: Jan. 6 and Ukraine 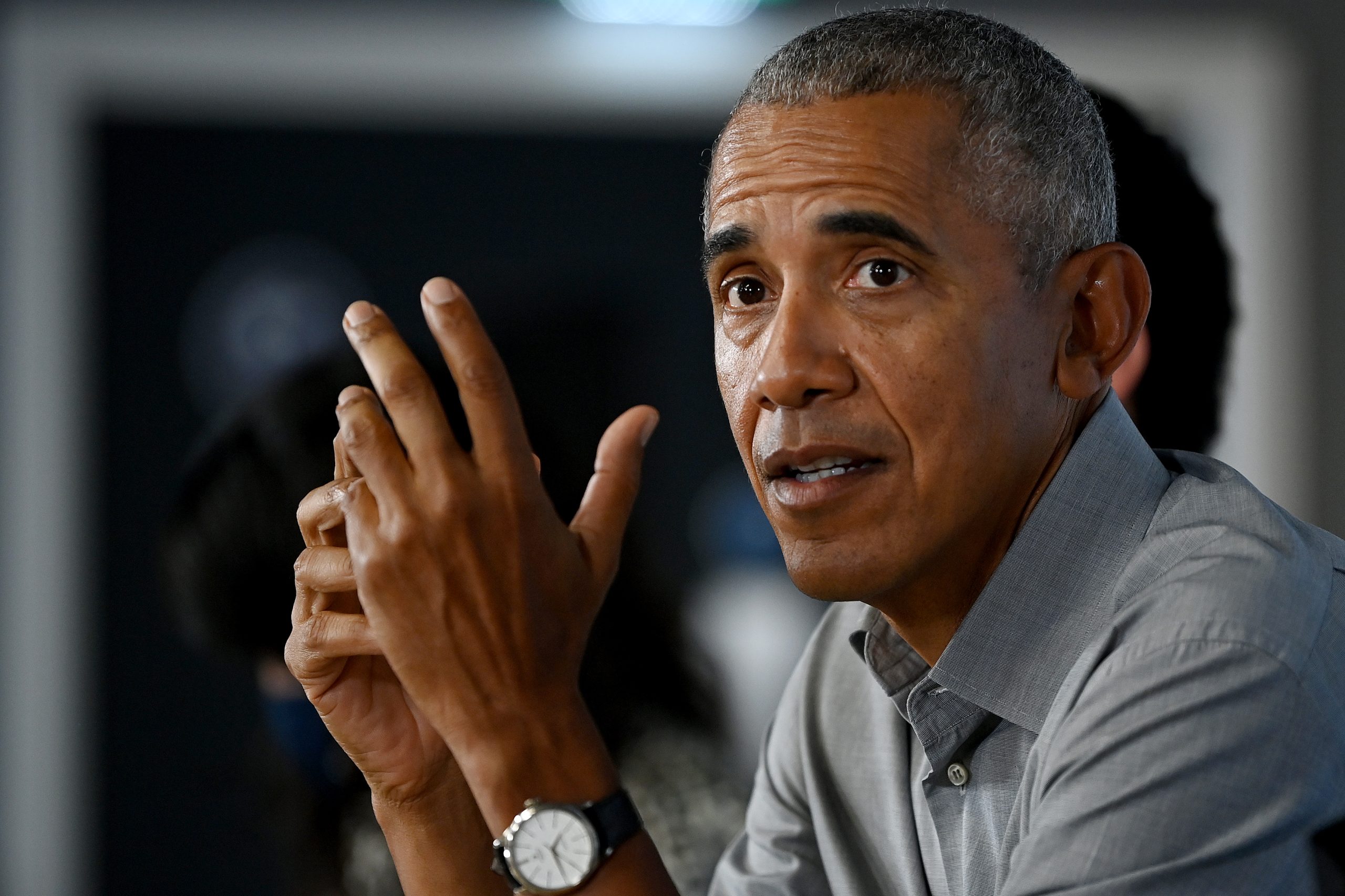 As much of the political world tunes in to the Jan. 6 commission’s opening hearing Thursday evening, former President Barack Obama will be half-a-world away, preparing his own presentation about the potholed path that democracy is on.

Obama is speaking on Friday at the Copenhagen Democracy Summit in addition to holding a meet-up Saturday of more than 60 Obama Foundation leaders from across Europe. It is the latest in a series of clarion calls he’s made about challenges democracies are facing. But, unlike those past ones, the shadow of America’s own political tensions will be especially pronounced this go-around.

“I think the two events that most clearly manifest the dangers to democracy in the world today are January 6 and the Russia invasion of Ukraine,” said Ben Rhodes, Obama’s longtime foreign policy adviser, who is helping with the speech. “The Russia invasion of Ukraine represents the danger that autocracy poses to human beings and global order. January 6 represents the danger to democracy from within. Those are related challenges.”

It’s unclear the degree to which Obama will reference Jan. 6 in his speech, or if he’ll discuss it at all. He is a chronic, last-minute editor, making it impossible to confidently state the contents until near-delivery. But Rhodes noted the goal is to speak to broader themes — disinformation, the need for inclusive capitalism, inequality, and the decline in political institutions — rather than specific news events. Others involved in the program stressed that the more important context was not Donald Trump’s lingering denial of the 2020 election results but the war in Europe.

“This is an inflection point. It is not just Ukraine’s fight but a fight for liberal democracy,” said Jonas Parello-Plesner, executive director at the Alliance of Democracies, which is hosting the summit.

“You’re speaking to a convinced trans-atlanticist,” he added. “Yes, this has been a hard moment for America… But show me the vice president in China or Russia who would stand up to their leader and say, ‘No, this is not how this should be done.’ So you’re a bit shaken. But the checks and balances are still there in the American system.”

Those who have worked alongside Obama say he recognizes that the roots of the problems democracies now face became apparent during his presidency. The backlash to the stock market crash and the rise of the internet opened a brief window of possibility around the globe. But that window closed relatively quickly. Technology hasn’t been a uniquely liberating force. Disinformation hasn’t been checked and regulated. Voting rights have not been expanded. Populism has been accompanied by nativism.

In his post presidency, Obama has tried, as Rhodes put it, to “connect some dots” on the issues. Earlier this year, he held an off-the-record session in Chicago with a group of reporters who cover democratic backsliding and disinformation, including Semafor’s Ben Smith, The Atlantic’s Anne Applebaum and Charlie Warzel, CNN’s Brian Stelter, and tech journalist Kara Swisher. He held another one in California with journalists including CNN’s Donie O’Sullivan, New York Times reporter Kevin Roose and Platformer journalist Casey Newton.

He’s also sought insight from conversations with a number of academics, including Renee DiResta, the technical research manager at Stanford Internet Observatory, Marietje Schaake, the international policy director at Stanford University’s Cyber Policy Center, Safiya Noble, professor of gender studies and African American studies at the University of California, Los Angeles, and Maria Ressa, the CEO of Rappler and the first Filipino recipient of the Nobel Peace Prize.

Asked for some of the reading materials that he has used to stay informed on the topics, an Obama aide sent over a lengthy list of newspaper and magazine articles. Among them, a New York Times column on Trump strategist Steve Bannon’s savvy in hyper-localizing his political focus; a New Yorker piece on the efforts by activists to create an ad-hoc oversight board at Facebook; and a Wired item on how to stop misinformation from going viral. He also has perused an Atlantic item on the gutting of newsrooms by the hedge fund Alden Global Capital, and a Curbed item about how one author’s objectively brilliant job at parallel parking sparked an Internet spat that underscored the mob-ification of online communities.

But, like everyone else, Obama’s work on these fronts has been overwhelmed by topics that seem more directly pertinent to everyday life. The coming summit will be the first in-person meeting of this cohort of Obama Foundation’s Europe program participants since its launch in 2020, when Covid-19 intervened.

“Copenhagen will be his opportunity to zoom out again,” said one official familiar with the planning, “where democracy stands and where young leaders can plug into that solution.”

Obama’s post-presidency has been a contrast between glitz and grunt work. He’s taken on a producer emeritus role at Netflix, helping to develop and even narrate documentaries. He has launched a podcast with Bruce Springsteen and penned the first half of a massive memoir.

He’s also helped spearhead a major redistricting initiative to put the Democratic Party in a far better spot than after the last round a decade ago. More recently, he’s begun aggressively using the spotlight that he commands.

In November, Obama gave a climate-focused speech in Glasgow that stressed the need for younger leaders to engage in politics. In April, he spoke with The Atlantic’s Jeffrey Goldberg about disinformation. Later that month, he went to Stanford University to talk about how disinformation was puncturing democracy across the globe.

That Stanford address, in particular, has taken on a layer of significance in Obama’s orbit.

Some aides emphasize that Obama has a unique capacity to discuss the tech industry — its products and shortcomings — having been, perhaps, the politician who benefited most prominently from the rise of social media networks that revamped campaigns and the fundraising for them.

“I think that gives him credibility to talk about this,” said Jason Goldman, a former Twitter board member and Obama’s first chief digital officer. “He knows these products. He has a long standing relationship with these companies. He is by nature a bit of a nerd. And when he has these conversations, they see a kindred spirit… He’s also able to say I’ve had this personal and professional journey of using these tools.”

But there is also internal staff pride that his Stanford address was critical of Silicon Valley at the intellectual heart of it. The from-the-belly-of-the-beast staging is something Obama has done repeatedly before. As president, he spoke about the need for financial regulatory reform at Cooper Union and challenged House Republicans on health care reform while at their retreat.

Copenhagen will be a continuation of that. Though the summit was planned before Russia’s invasion, the war in Ukraine will loom over its proceedings — a bloody, theatrical demonstration that democratic fault lines are close to crumbling.

“He knows the headwinds these young leaders face in terms of global democratic backsliding,” said Laura Lucas Magnuson, executive vice president of global programs at the Obama Foundation. “It makes what we’ve long been doing more urgent than ever and the work of our leaders more urgent than ever. At this moment people really want to hear him continue on that track.”

From a health background, Phil covers health and lifestyle news as well as medical research news from around the world.

Abortion access could soon be decided by the states. Here’s what the next governors say.

He defied Trump and still survived a GOP...

He’s one of the most powerful gun lobbyists...