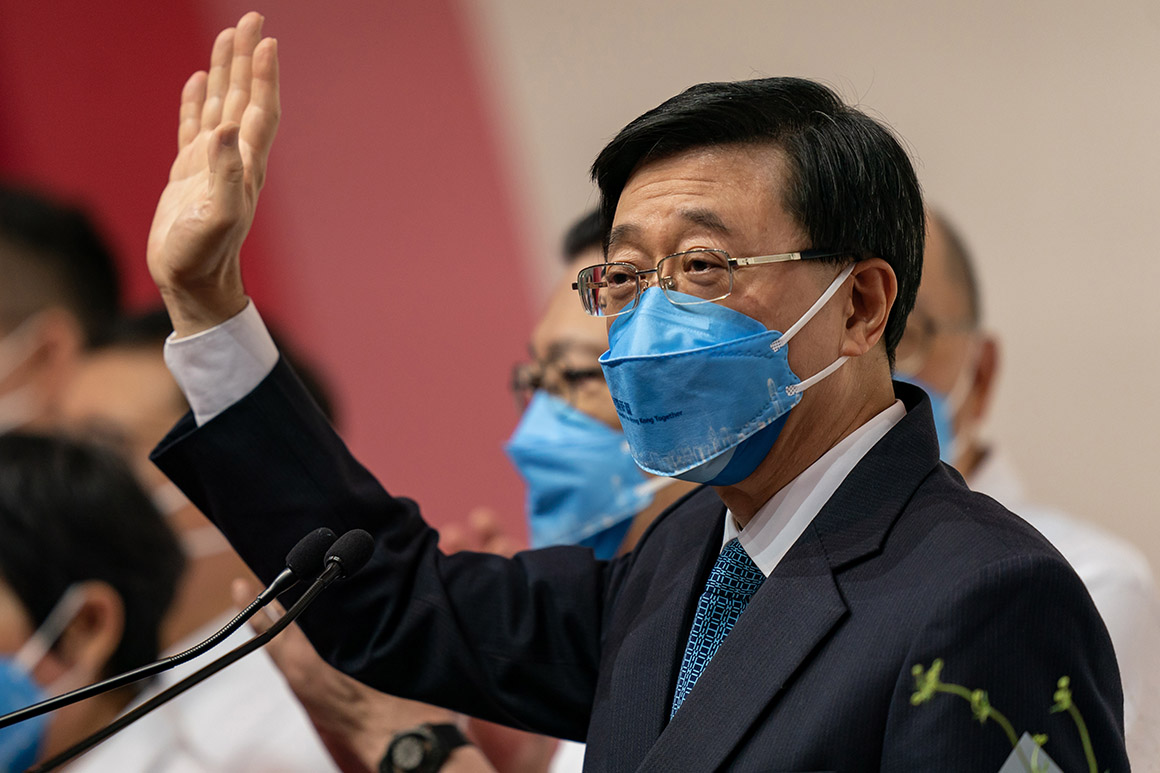 Lee’s victory underscores Chinese President Xi Jinping’s determination to eradicate rule of law in the former British colony — but it also risks its viability as a regional business center as foreign businesses rethink the dangers of operating in Hong Kong.

“[Beijing] chose the guy who could crush people and use the judicial system for national security purposes. … The people the Party trusts are the people who can go for the jugular and erase protests and any kind of dissent,” said Samuel Chu, president of the nonprofit The Campaign for Hong Kong. “[Lee] isn’t addressing pocketbook or livelihood issues. He’s checked the boxes to say, ‘I am going to be Beijing’s enforcer here.’”

Lee’s record of zero-tolerance for peaceful dissent made him Beijing’s natural preferred candidate to replace the widely reviled chief executive, Carrie Lam. Not that Lee looks to be any more popular with the locals.

As security chief, Lee oversaw brutal police responses to pro-democracy protests. And his implementation of the draconian National Security Law introduced in June 2020 prompted the U.S. Treasury Department to place him and Lam on a sanctions list.

Police enforcement of the National Security Law has led to the arrests of more than 160 people since June 2020 — for crimes including organizing informal public opinion polls — and the closure of over 150 civil society organizations. Lee’s election signals Beijing’s endorsement of his role in gutting rights and freedoms guaranteed to Hong Kong for 50 years under the Sino-British Joint Declaration and Hong Kong’s Basic Law that govern the post-1997 British handover of the territory to China.

Lee’s election constitutes “a continued assault on political pluralism and fundamental freedoms” in the territory, the G-7 foreign ministers said Monday in a statement.

The U.S. government is under no illusions about Hong Kong’s direction under Lee. Secretary of State Antony Blinken last month accused the Chinese government of seeking to “dismantle Hong Kong’s democratic institutions, placed unprecedented pressure on the judiciary, and stifled academic, cultural, and press freedoms,” during the release of this year’s Hong Kong Policy Act Report.

GOP lawmakers are demanding the Biden administration widen its sanctions of Hong Kong officials deemed complicit in those abuses.

“We believe that the Committee for Safeguarding National Security of the Hong Kong Special Administrative Region, National Security Law designated judges, and prosecutors should be subject to sanctions,” a group of seven lawmakers, including Reps. Vicky Hartzler (R-Mo.), John Curtis (R-Utah) and Young Kim (R-Calif.) said in a letter to Biden last week.

Hong Kong pro-democracy activists say the Biden administration’s combination of sanctions and stern rhetoric are toothless deterrents to Beijing’s tightening stranglehold on the city. “Beijing basically made a calculation that if they do this to Hong Kong, the international community and the U.S. government will condemn them, but essentially will roll over which is what they’re doing,” said Dennis Kwok, former Civic Party member of Hong Kong’s Legislative Council and senior fellow at Harvard’s Kennedy School of Government.

The ordeal of former Hong Kong-based American lawyer Samuel Bickett illustrates that foreign expatriates working in the city’s financial sector aren’t immune to the Lee-supervised roll back of rule of law.

Bickett, who was a financial compliance director at Bank of America Merrill Lynch, intervened to stop a vicious assault by a baton wielding assailant on a teenager in December 2019. Police responded by charging Bickett with assaulting a police officer even though the assailant was officially retired at the time of the incident. Despite inconsistencies, eyewitnesses and surveillance camera footage supporting Bickett’s account of the incident, a Hong Kong court sentenced him to a four-month, two-week prison term then deported him in March after he served two-thirds of that sentence.

“It was just shocking how blatant the judicial misconduct was,” Bickett told POLITICO. “My case was one of the early ones where you saw this dive into the abyss by the judiciary from a legal [integrity] standpoint.”

“[Bicketts case] shows that Hong Kong has changed immeasurably and there’s a lot of uncertainties that did not used to exist — nobody knows what the rules are anymore,” said Tara Joseph, who stepped down as president of the American Chamber of Commerce in Hong Kong in November.

One metric of the growing insecurity felt by foreign citizens in Hong Kong who long took the city’s freedoms and rule of law for granted was the decision last month by Hong Kong’s Foreign Correspondents’ Club to suspend its annual Human Rights Press Awards. “Over the last two years, journalists in Hong Kong have been operating under new ‘red lines’ on what is and is not permissible, but there remain significant areas of uncertainty and we do not wish unintentionally to violate the law,” Keith Richburg, the club’s president, said in a statement.

The fate of Hong Kong media mogul Jimmy Lai underscores the vulnerability of the city’s corporate sector to Beijing’s hostility to dissent.

Lai is currently serving a 20-month prison term for his alleged role in organizing what the Hong Kong government calls illegal protests. Lai also faces prosecution for allegedly masterminding an “international propaganda campaign” aimed to bring foreign sanctions against China. The Hong Kong authorities have frozen Lai’s assets, arrested top editorial staff at his flagship newspaper Apple Daily then forced it to close in June. Officials then capped it off by ordering the liquidation of Apple Daily’s company, Next Digital Ltd., in December.

“The message to the business community is they can shut you down overnight and no matter how much assets or the global worth of your company, you will not have legal rights either as an entity or as an individual,” Chu said.

Observers say that the city’s foreign business community is passively complicit in the government’s attack on rule of law by failing to criticize those abuses. Even worse, international business executives in the city have attacked the media for reporting on those violations, reflecting a longtime corporate alignment with a government whose approval is essential to access the Chinese market.

“When I introduced the Hong Kong Universal Democracy Act back in 2014, I had the business community beat down my door with phone calls saying, ‘What are you doing!’” Rep. Chris Smith (R-N.J.) told POLITICO.

“People in business and finance still have their blinders on as to the risks that they can face, which is stunning,” Joseph said. “Companies will really think twice before they pull the plug there, but what some of them are doing is moving departments or executives to other [places] with Singapore being the prime example.”

U.S. lawmakers are serving notice that they won’t tolerate corporate complicity with Hong Kong authorities’ efforts to undermine rights and freedoms. The bipartisan Congressional-Executive Commission on China in March warned the Hong Kong and Shanghai Banking Corporation Ltd., a British multinational financial services and investment bank, that any moves to freeze Hong Kong media and civil society groups’ access to their bank accounts may violate the terms of the Hong Kong Autonomy Act.

HSBC is unfazed. “Like every bank, we are required to operate within the law and legal frameworks of all the countries and territories in which we operate,” Matt Ward, head of communications at HSBC Bank USA, said in a statement.

Imposing financial penalties on foreign firms facilitating Hong Kong authorities’ assault on rule of law may be the only meaningful tactic left to activists and concerned foreign governments.

“Shaming them from an ethical standpoint … is not going to get them to lose money,” Bickett said. “Two years of protests and unethical and downright criminal behavior by the Hong Kong government and the Chinese government in Hong Kong did very little to move Western corporations and money [out of Hong Kong], but what seems to be doing it now is COVID … because ultimately, they’re not making money there.”