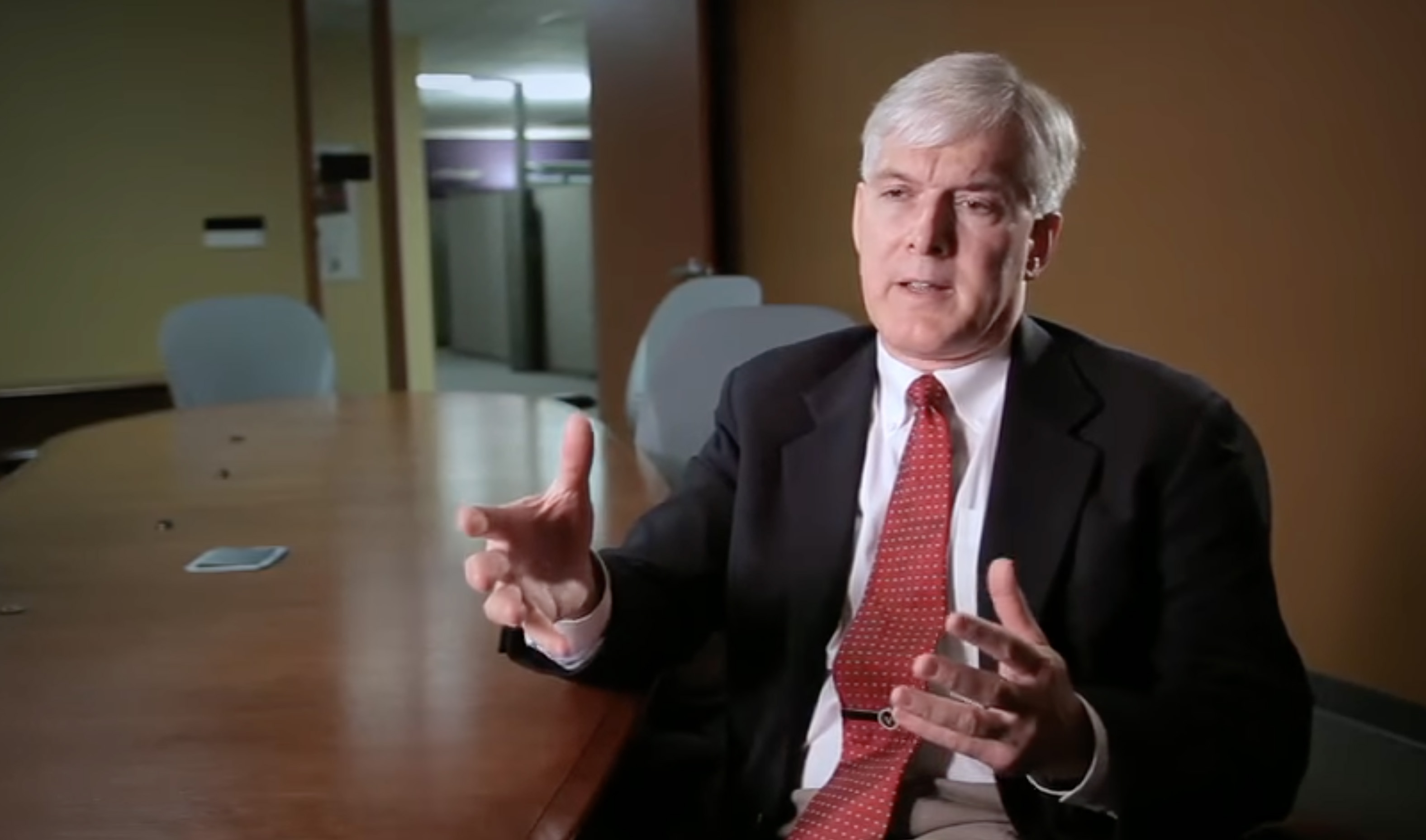 Not long after he was nominated to lead the Bureau of Alcohol, Tobacco, Firearms and Explosives, David Chipman received a call from a longtime associate: firearms attorney and lobbyist Mark Barnes.

Chipman assumed Barnes was in search of intel on whether he would be an industry-friendly ATF leader, so he decided against ringing the lobbyist back. He now speculates whether that failure to connect cost him the job.

“If I wanted to be the director, I needed to call him back,” said Chipman, chuckling as he recounted the story. “I didn’t.”

Few individuals have been such a constant force within gun advocacy circles as Barnes, who runs an eponymous firearms, explosives, and ammunition law firm based in Washington, D.C.

He is the rare Washington power broker with close relationships in the industry and its regulators. His work has involved, among other things, seemingly helping shape ATF regulations — raising concerns about how cozy those relationships can be. One former ATF official who met with Barnes throughout their career called his access to bureau officials “baffling,” citing, among other things, the way Barnes could directly call high-level ATF officials even while having clients in the firearms industry.

Chipman’s nomination as ATF chief was ultimately withdrawn last September, amid opposition from groups pushing for gun restrictions and a lack of support from Senate lawmakers. Chipman never determined whether Barnes played a role.

“Just envision, if I was doing a movie and call it ‘Gunsick’ instead of ‘Dopesick,’” he said, referring to the film about the nation’s opioid crisis. “There would definitely be a scene where ATF executives in a boardroom were meeting with Mark Barnes, and he is in a very polished way representing the industry who in other scenes has just been shown as bloodthirsty and rabid.”

One of Barnes’ skills is his ability to operate in the shadows. He has largely kept his name out of the media. Few pictures of him exist on the internet. He is obscure outside of gun shows and firearms conferences. But he is well-known within the industry — and at the ATF. Richard Feldman, a former NRA lobbyist, speculated that anonymity has, in part, fueled his success.

Interviews with former bureau officials, activists on both sides of the gun debate, and industry operatives, some of whom were granted anonymity to speak freely about Barnes and their interactions, along with internal ATF documents underscore the access and influence he has had over the years.

Barnes’ powerful clients have included the National Rifle Association and the National Association of Arms Shows. He also has represented the so-called ghost gun manufacturer Polymer80 and Defense Distributed, an organization that offers blueprints for building guns with 3-D printers. The Citizens Committee for the Right to Keep and Bear Arms reported spending nearly $1 million on lobbying in 2021, according to lobbying disclosure filing. Barnes is the group’s sole registered lobbyist.

Ryan Busse, a firearms industry executive-turned gun control advocate, called him “a well known and visible attorney and compliance fixer for the industry” who was “prominent in industry social gatherings.”

Barnes did not respond to questions about his work. He said in an emailed statement that for nearly 30 years, he has “advised clients on navigating arcane and complicated laws and regulations governing firearms and other products that are subject to heightened controls.”

“My practice also requires expertise in understanding the products sold by my clients and how to apply the many rules that govern those products,” he wrote in the statement. “My firm uses its extensive experience and expertise to help our clients not only legally import, export, and sell their products, but also to assist in developing best practices for their compliance teams.”

One gathering — which became a vivid illustration of how Barnes blurs the lines between industry and regulator — occurred in 2017. That year, Barnes hosted a meeting in Arizona to discuss industry matters. He charged attendees an attendance fee of between $1,200 to $1,500 per company, according to the invite viewed by POLITICO. With entry to the event, attendees also found themselves among high level ATF officials, including the then-division chief of the firearms and explosives industry division, a bureau deputy assistant director, and the division chief of the firearms and ammunition technology division, among others.

At the time, a professional in the firearms compliance space reached out to an ATF official to voice concern over the conference and the appearance of buying access, saying that “what started as ATF’s DD [destructive device] working group has now morphed into a Mark Barnes ‘pay to play’ working group.”

“There is an important perception issue here for ATF,” the same person wrote in an email redacted to protect the sender’s privacy and seen by POLITICO. “[I]s it a working group that can be hijacked by a non-government attorney so that he can dominate the meetings, slant issues in favor of his clients, and then charge non-clients to attend? I spoke … a few weeks ago about the importance of ATF controlling this working group and I am not convinced that is happening.”

It’s not unusual for ATF officials to attend industry events. But Barnes’ firm’s ability to recruit high-level ATF officials to his conference underscored just how tight his relationship with the bureau is and how well steeped he is in the federal bureaucracy.

In a statement, Erik Longnecker, a spokesperson for ATF, did not comment on the bureau’s relationship with Barnes. But he said the bureau “values its relationships with our academic, industry, and other community partners in regulating the firearms and explosives industries.” He added that it reviews inquiries based on their merits, regardless of who is asking.

According to his law firm bio, Barnes worked on drug abuse policy at the Department of Health and Human Services, and in roles at the Office of Personnel Management. He also served as chief counsel to the late Sen. Ted Stevens (R-Ala.).

Barnes’ law firm lists two former high-level ATF officials among its consultants, one of whom oversaw firearms enforcement programs and another who served as the chief of the firearms and explosives imports branch. Barnes also helped write a Trump-era ATF white paper that advocated for a number of industry-friendly proposals, according to internal bureau documents first reported years ago.

Part of Barnes’ business comes from crisis management, helping firearms companies accused of violating the law or regulations. In some cases, resolutions brokered between Barnes and ATF or the State Department have allowed his clients to continue business even after the violation, according to the website for Barnes’ firm.

A lawyer in the firearms industry confirmed Barnes’ ability to dial up the top ranks at ATF, although the lawyer said that is no longer the case. A current ATF official maintained Barnes’ attempts in recent years to reach those at a high-level were redirected to more appropriate people down the chain.

Still, Chipman, who spent more than two decades at ATF and retired from the bureau in 2012, said the “unprecedented access” Barnes had to people working on regulatory matters means he has the power to “to make your life miserable.”

“Part of ATF culture is, over the years, executives have not been rewarded by getting sideways with industry, and so he was one of those people that for most ATF executives, it was better to be his friend than his enemy,” Chipman said.

Barnes’ name circulated in the media briefly years ago when news broke of his involvement in the 2017 ATF white paper that proposed loosening certain gun regulations. Then-associate deputy director Ronald Turk reached out to him weeks before Donald Trump was to be inaugurated regarding “potential ‘hot’ regulatory issues for the ‘new team,’” according to an email obtained by the gun control group Brady under a Freedom of Information Act request.

“If I am missing the mark on a major issue or disregarding a major discussion point any feedback you have would be appreciated,” Turk wrote in the email to Barnes, dated Jan. 9, 2017. “My hope is that the agency can demonstrate flexibility where appropriate and identify areas for further discussion.”

Barnes submitted a series of suggested changes to the draft white paper, including one to lift restrictions on the imports of Russian-manufactured firearms and ammunition that did not make it into the final draft. He also suggested language that advocated changing the definition of silencers to eliminate issues for manufacturers and suppliers. The final memo adopted similar language.

Barnes has represented the trade association of firearms and ammunition importers and exporters, and in 2018, he registered as a lobbyist for the silencers manufacturer B&T USA.

Among other recommendations proposed by Barnes in the white paper was that ATF issue a study to examine the widespread use of AR-15s and other similar semi-automatic firearms in sporting. Turk embraced the recommendation with similar language in the paper’s final draft.

Though other lawyers work in firearms compliance, few, if any, have been such a constant force as Barnes. He was hired decades ago by the NRA’s lobbying arm, the Institute for Legislative Action. He served in that role as an informant of sorts on the Hill, gleaning details that the NRA would otherwise struggle to obtain, said Feldman, the former NRA lobbyist. Barnes and the NRA later parted ways. According to an operative in the gun industry, leadership ended the relationship, in part, because Barnes had too much power as an outside consultant.

Paul Jannuzzo, a former CEO of Glock Inc., who has referred clients to Barnes in the past, postulated that Barnes may have been the one who originally helped establish an open dialogue between ATF and the industry it seeks to regulate, citing conferences Barnes had hosted.

Though he maintained that Barnes does not get special access as a result of his connections, Jannuzzo also noted, “I’m sure when he calls, they pick up the phone because they know who it is.”