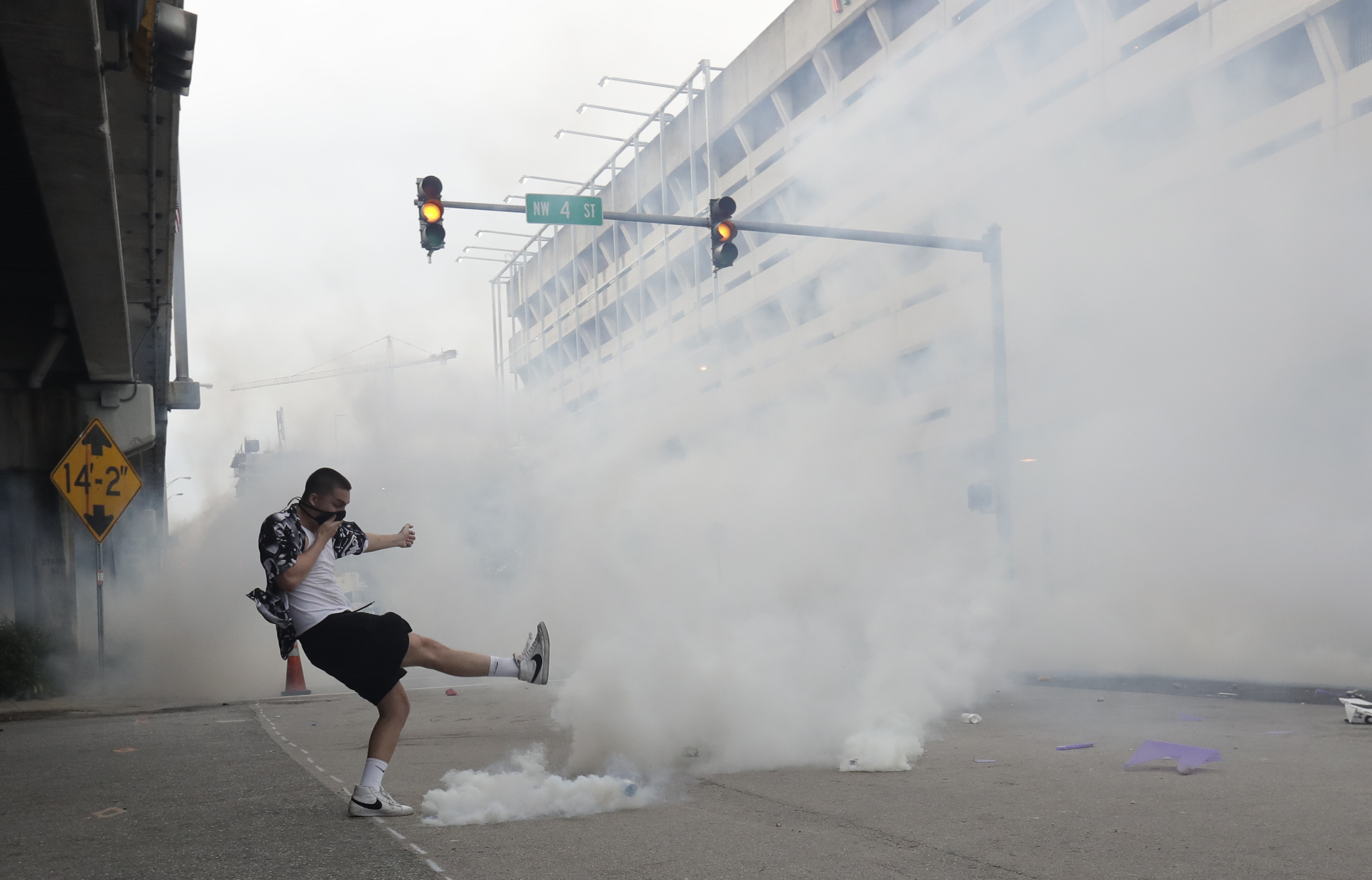 Dozens of wealthy candidates run for Congress every election cycle. What sets Cory Mills apart are some of the mileposts on his road to riches: Selling tear gas that was used against Black Lives Matter demonstrators and purchasing a company that sold rubber bullets to Hong Kong to crack down on protesters.

Mills, a first-time Republican candidate running in a competitive primary in Florida’s 7th district, is the co-founder of PACEM Solutions. The company sells arms and riot-control gear and provides law enforcement training and private security consulting in the U.S. and around the world.

Legally there’s no issue with the firm’s activities. Politically, though, its sales of tear gas and rubber bullets could put Mills — a military combat veteran and Bronze Star recipient who launched PACEM Solutions in 2014 after many years spent in combat zones as a contractor — in a dicey position.

Anti-riot bullets sold by what later became a PACEM subsidiary, ALS Less Lethal, were photographed in 2019 after being used against protesters by Hong Kong police, according to reports in the Hong Kong Free Press and the Miami New Times.

The demonstrations in 2019 and 2020 against an extradition plan being pushed by mainland China drew almost two million people and were backed by numerous members of Congress in the U.S.

PACEM’s tear gas, meanwhile, was used against Black Lives Matter protesters in the United States in 2020, which prompted interest from the House Oversight and Reform Committee the following year.

In a written response to questions from POLITICO, Mills said that PACEM was “proud” to sell tear gas to law enforcement agencies in 2020, citing looting and vandalism that followed some demonstrations.

“Products like tear gas are sanctioned and utilized by the Department of Defense and state and federal health departments,” Mills said in his response. “They are used on a daily basis to train our military personnel and [law enforcement officers]. Each officer or military member, who utilizes these irritants, must experience these irritants prior to certification. I for one, am thankful that our officers have less lethal options available to ensure order and preserve lives.”

He said PACEM has stopped selling munitions to Hong Kong.

“One country, two systems” was the foundational principle for the United Kingdom’s handover of Hong Kong to Beijing’s control in 1997. It included a guarantee, grievously undermined by Beijing, that Hong Kong could maintain its system of governance, rule of law and respect for human rights until 2047.

PACEM Solutions has estimated annual sales of $13.5 million, according to Dun & Bradstreet, a business data and analytics firm. Mills is funding his own run for Congress mostly with money he earned through the company.

A majority of his campaign funds — $641,500 through the end of 2021 — comes from personal loans, according to the most recent campaign finance disclosures. Mills’ wealth has made him the second-best-funded candidate running for Florida’s 7th District, an Orlando-area seat that’s expected to be drawn to favor Republicans after redistricting.

At public events, Mills, 41, a 6th-generation Floridian who was born and raised in central Florida, has criticized vaccine mandates, slammed critical race theory and said that the Biden administration being “weak” and “woke” encouraged Russia to invade Ukraine.

One recent poll had Mills running neck and neck with Florida state Rep. Anthony Sabatini, but with many voters undecided. The poll also found that Seminole County Commissioner Lee Constantine would be ahead of Mills if he joined the race. The district is now represented by Rep. Stephanie Murphy (D-Fla.), who is not running for reelection.

The company’s full response to the 2020 congressional letter was not made public. But a subsequent report from the oversight committee stated that PACEM made $1.2 million in tear gas sales to U.S. law enforcement agencies, corrections facilities and distributors from January 2018 to June 2021.

Members of Congress are still raising concerns about the widespread use of these products and safety issues related to them.

Rep. Raja Krishnamoorthi (D-Ill.), the lead signer on the House committee’s letter to PACEM, said the government needs to fund more research into the health effects of tear gas, saying he was “concerned about the widespread domestic use of tear gas as a riot control agent.”

“This is a product that has been banned from use in war as a chemical weapon and that no federal agency has ever determined to be safe to use on humans, and yet we allow companies like PACEM to manufacture and sell tear gas products for widespread use,” Krishnamoorthi said in a statement to POLITICO.

“Manufacturers have continued to profit off its sale, and law enforcement agencies have had free rein to use it against protesters across the country. This unregulated, violent and deadly chemical weapon can cause long-lasting health damage to community members, including asthma, respiratory failure and even death,” Bush said in a statement to POLITICO. She said she’s working with oversight panel Chair Carolyn Maloney (D-N.Y.) “to get answers from Mr. Mills and PACEM on what specific steps they plan to take to get this weapon of war off our streets.”

“As a combat veteran and a longtime supporter of law enforcement, I am happy that my company has always supported ALL Law Enforcement, including correctional officers,” Mills said in his written statement.

PACEM Solutions is registered to work in Washington, D.C., as well as in Pakistan, the United Arab Emirates, Iraq, Kenya, Malaysia and Kuwait, according to Mills’ former LinkedIn profile, which was recently taken down. It has also provided what it calls “support and advisory” services to authorities in Iraq, Ukraine, Pakistan, the Democratic Republic of Congo, the Kurdish region, Malaysia and other countries.

Though he now calls Florida home, Mills and his wife, Rana Al Saadi bought a $4.2 million, nearly 11,000-square foot estate in northern Virginia in 2017, according to property records, shortly after they founded PACEM and after Mills served as a contractor for the State Department for five years. They’ve since listed the home for sale four times, most recently in July 2021. The home was taken off the market in mid-January but has not been marked as sold, according to the real estate tracking website Realtor.com.

While Mills has spent much of his adult life abroad as a soldier or contractor and in Washington as a government contractor, when he announced his candidacy a year ago he said he’s in Florida about 70 percent of the time now. He said he moved from an old family home in Florida to one that’s going to be in the district where he’s running, according to Florida Politics.

Mills has made significant contributions to Republicans at the federal level — especially in 2020, before launching his own candidacy.

Mills donated almost $27,000 to the joint fundraising committee for GOP House leadership, Take Back the House 2020, according to FEC disclosures. This was in addition to about $1,500 he sent to the Republican National Committee and $349 to Donald Trump’s PACs.

At the same time, Mills’ businesses were collecting more than $1.1 million in government loans that were made available during the pandemic to help small to medium-sized businesses, commonly known as PPP loans. AMTEC Less-Lethal Systems, which is owned by PACEM, collected more than $1 million in the PPP loan program and Pacem Solution International claimed $173,000.

The loans were later forgiven.

“The PPP loan provided salaries during lockdowns,” Mills said in his statement to POLITICO, “and as a result our business like many others never had to lay off a single employee.”