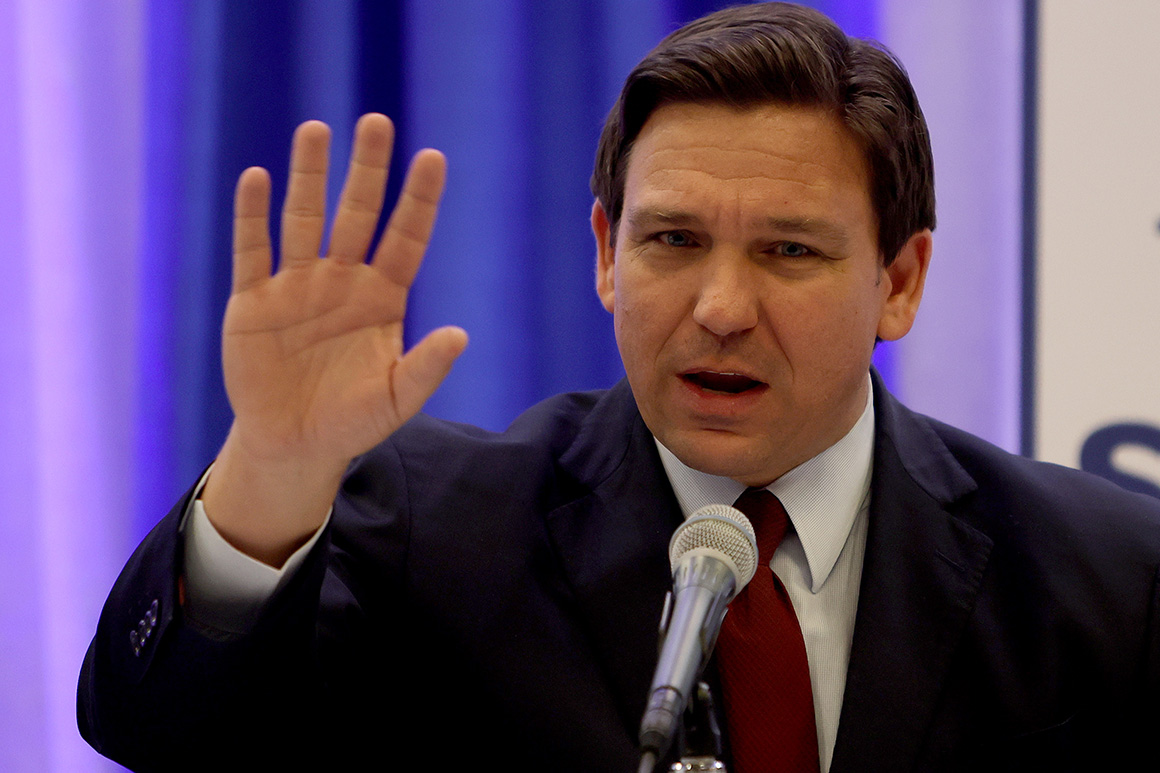 TALLAHASSEE, Fla. — GOP Gov. Ron DeSantis is increasingly using his clout with Republican voters to elevate political allies throughout the state, marking the first real effort to build a political network by a governor with a notoriously small inner circle.

DeSantis has already used one endorsement to scuttle the candidacy of a state lawmaker seeking a Florida Senate seat who likely would have had the backing of his own party’s leadership. The Republican governor is also sending signals he could endorse in two other races where incumbent Republican state representatives, who have the support of state Senate GOP leadership, are running.

DeSantis’ public support has echoes of former President Donald Trump, who has doled out endorsements to his favored candidates but with more mixed results.

“Governor DeSantis is the most popular politician with the grassroots I have seen in a long time,” said Evan Power, chair of chairs for the Republican Party of Florida. “His endorsements are gold with our voters. It feels like the governor is using those endorsements now to build his network of politicians in Tallahassee who share his fighting philosophy that will help him pass aggressive agendas for the conservative cause.”

DeSantis’ endorsements signal that the governor, ahead of upcoming elections, is seeking to expand his support within the Florida Legislature and beyond with allies who are ideologically similar to him. The endorsements also send a message to Republican legislative leaders that he’s willing to buck them in order to consolidate power.

DeSantis, whose campaign did not return a request seeking comment, has in the past been notoriously stingy with his endorsements, using them in rare cases and generally only when his preferred candidate was very likely to be victorious. That changed, however, when DeSantis last month backed state Rep. Blaise Ingoglia (R-Spring Hill), who was running for a Florida Senate seat eyed by fellow House Republican Ralph Massullo (R-Lecanto). Massullo was favored by Senate Republicans, including incoming Senate President Kathleen Passidomo.

On the same day DeSantis backed Ingoglia in mid-March, Passidomo told POLITICO “all options” were still on the table regarding which candidates the Florida Republican Senatorial Campaign Committee, which is led by the incoming Senate president, would endorse.

Two days later, Massullo issued a statement saying he was abandoning his bid for Senate to stay in the House, noting that he has the “utmost respect and admiration” for the governor whose support for Ingoglia knocked him out of a key Florida Senate race.

“From a strategic political standpoint, Governor DeSantis’ endorsement is the most powerful thing in a Republican primary right now,” Ingoglia said in an interview. “The intensity of the endorsement is off the charts, with 76 percent of primary voters more likely to vote for a DeSantis-endorsed candidate.”

“It’s a game changer,” said Ingoglia, a close ally of the governor who was one of seven House Republicans to vote against proposed redistricting maps that DeSantis ultimately vetoed.

DeSantis’ ability to easily clear the field for his preferred candidate has prompted open speculation about where DeSantis will endorse next, which could complicate things for Senate Republicans and set up a chamber with lawmakers with more loyalty to DeSantis than their own caucus leadership.

“All leaders, from presidents to governors, want people philosophically aligned with them. I do not think it’s uncommon,” said Rep. Cord Byrd (R-Neptune Beach). “[DeSantis] has been clear he is the leader of the Republican Party and he wanted some of these decisions run by him. I think this is consistent with that idea.”

Byrd is also considered a DeSantis ally after he also voted against House congressional maps supported by that chamber’s Republican leadership, including Speaker Chris Sprowls. Byrd has joined DeSantis at a series of press conferences, and his wife, Esther, was appointed last month by DeSantis to the state board of education.

Byrd, along with fellow House Republican Jason Fischer (R-Jacksonville), was seeking an open Jacksonville-based Florida Senate seat but dropped out of the GOP primary after Passidomo publicly endorsed state Rep. Clay Yarborough (R-Jacksonville). But DeSantis’ backing of Ingoglia — and successfully tanking a leadership-favored candidate — rebooted the Jacksonville race, with some wondering if the governor is weighing an endorsement in that contest.

“There is a lot of chatter about it, I realize that, but so far the governor has not endorsed anyone,” Byrd said. “I am fortunate to have a lot of options, remaining in elected office is one of them.”

Fischer, who is now eyeing a bid for Congress based on how the new political lines are drawn, said DeSantis is the “most popular elected Republican in the country.”

“There’s no question his public support would be a game changer, in Florida or anywhere else for that matter,” he added.

Another potential target for DeSantis’ involvement is the Treasure Coast-based Florida Senate seat sought by state Rep. Erin Grall, a Vero Beach Republican leaving the House after three terms to run for Senate. There is increasing discussion within the Capitol about DeSantis backing a challenger to Grall, who is loyal to Senate leadership. Grall did not respond to a request seeking comment.

DeSantis has also long signaled he would use his influence in local school board races, generally low-profile races that have increasingly come into the spotlight as Republicans focus on culture war issues like critical race theory and banning classroom lessons on sexual orientation and gender identity for students in kindergarten through third grade.

DeSantis has not yet publicly backed any school board candidates, but far back as last summer, promised to get his “political apparatus” involved in local school board races, a contention he has emphasized in recent weeks.

“I don’t know that I ever got involved in school board races before, but we will be involved this year,” DeSantis said at a press conference last month used to sign legislation that, among other things, creates 12 year school board term limits. “We want to help people who are going to help our kids.”