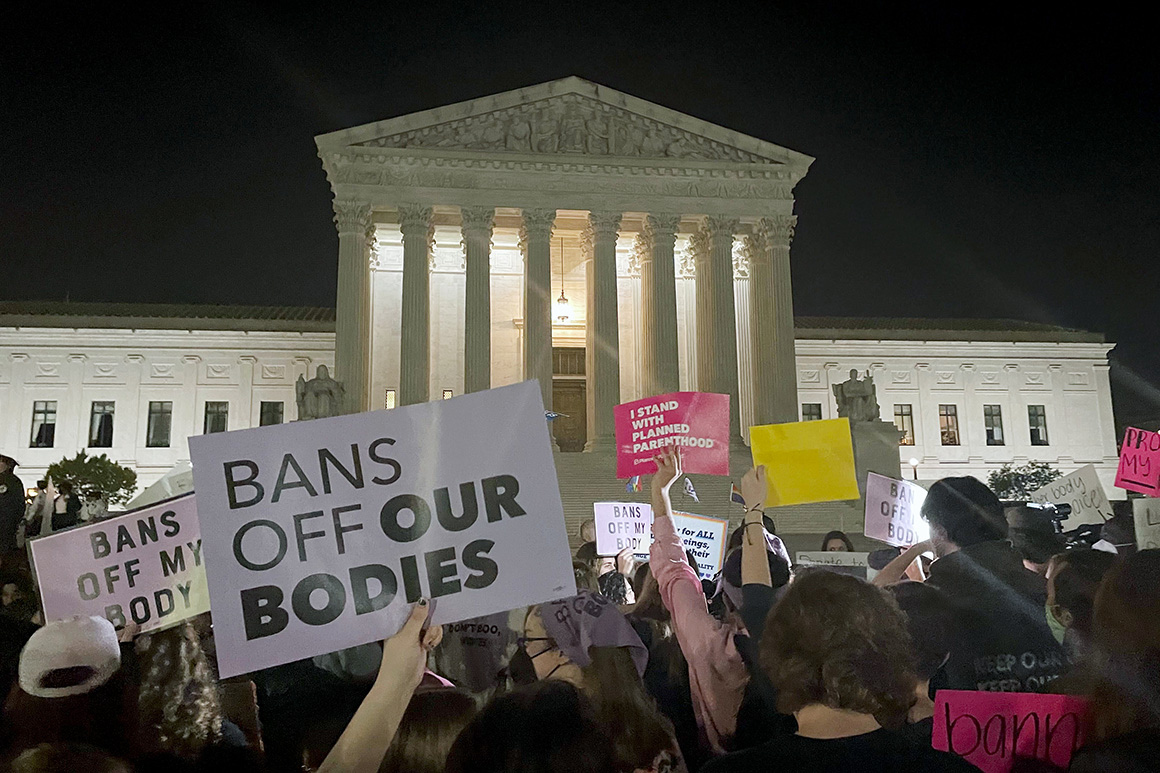 The disclosure of a draft majority opinion that indicates the Supreme Court has voted to overturn Roe v. Wade instantly jolted Democrats from a bout of political malaise Monday night — and many hope it could change the tide of the midterm elections.

Hours after POLITICO’s reporting on the high court’s draft opinion, Democrats privately predicted that the potential decision by its five-conservative majority to repeal the landmark abortion-rights ruling would energize their base and drive up turnout in November. The party’s governors, senators and House members took to social media and the airwaves with reactions that ranged from pleas to codify Roe to emotional personal stories.

“This kind of outcome is exactly what I’ve been ringing alarm bells about — and this is a five alarm fire,” said Washington Sen. Patty Murray, the chamber’s No. 3 Democrat and leader of its health committee.

“The Republican-appointed Justices’ reported votes to overturn Roe v. Wade would go down as an abomination, one of the worst and most damaging decisions in modern history,” Speaker Nancy Pelosi and Senate Majority Leader Chuck Schumer said in a joint statement late Monday. They said the decision would be the “greatest restriction of rights in the past fifty years.”

Rep. Sean Patrick Maloney (D-N.Y.), who leads the House Democratic Campaign Committee, called it “the central choice in the 2022 election.”

Privately, however, several Democrats acknowledged that campaigning on the court’s potential rejection of abortion rights would likely require them to do something they’ve typically struggled with in election years — challenge the GOP on an issue that galvanizes its base.

The Supreme Court has not yet issued its final decision in a pending case that challenged Roe v. Wade. Yet the now-imminent threat to the 1973 abortion-rights ruling is already permeating into the Democrats’ midterm message, with leaders of the House and Senate campaign arm releasing statements condemning the court’s looming announcement.

The Democratic Senate campaign arm’s executive director, Christie Roberts, said Monday evening that the reported draft opinion “has dramatically escalated the stakes of the 2022 election.” She called for expanding the chamber’s Democratic majority “to confirm or reject Supreme Court justices.”

The prospect of Roe’s demise also sparked fresh calls from Democratic Senate candidates in battleground states, including John Fetterman in Pennsylvania, Mandela Barnes in Wisconsin and Tim Ryan in Ohio, to end the legislative filibuster in order to enact abortion rights as law. But there’s almost no chance that the evenly split Senate would nix the 60-vote threshold that’s required to pass most bills.

Dozens of Democrats, including their most vulnerable lawmakers and governors facing reelection in the fall, also took to Twitter to warn of the consequences if the law is rolled back.

“Our work is more important than ever. I’ll fight like hell to protect abortion access in Michigan,” Democratic Michigan Gov. Gretchen Whitmer tweeted, pointing to a lawsuit she’s backing aimed at preserving abortion rights in her state.

Another politically endangered Michigan Democrat, Rep. Elissa Slotkin, sounded a louder alarm: “If tonight’s news is true, Michigan’s 1931 state law banning abortion would snap back into effect, making any abortion illegal in our state — even if the mom will die, or if she was raped by a family member. No exceptions,” she tweeted. “My poor mother is turning over in her grave.”

Rep. Katherine Clark (D-Mass.), a member of party leadership, said the court’s draft majority opinion would “make the dystopian horrors of forced pregnancy a reality.” Rep. Pramila Jayapal (D-Wash.), who leads the Congressional Progressive Caucus, tweeted: “As one of the 1 in 4 women in this country who have chosen to have an abortion, I am outraged & disgusted by the reported draft SCOTUS opinion.”

Many Republican lawmakers refrained from public comment on Monday night. Those who did, such as Sen. Josh Hawley (R-Mo.), focused on the “unprecedented breach of confidentiality.”

Outside the Supreme Court, hundreds of pro-abortion-rights demonstrators were gathered at 10:30 p.m. Bike racks had been placed as temporary barricades in front of the steps of the court.

The crowd broke out in various chants, including “pack the court,” “women’s rights” and various insults to Justice Samuel Alito, the draft majority opinion’s writer. The calm atmosphere became suddenly tense when a handful of anti-abortion-rights protesters came onto the scene, chanting, “Hey hey, ho ho, Roe v. Wade has got to go.”

The pro-abortion-rights crowd tried to drown them out by chanting, “Hey hey, ho ho, sexist fascists got to go,” and began shouting at the anti-abortion-rights demonstrators when they waded into the crowd to stand in front of the court. Still, the two groups remained nonviolent at 11 p.m.

If the Supreme Court’s decision becomes final — a ruling is expected to be released in June — the push for abortion rights will move to Congress. But with Democrats only narrowly in charge of the Senate, the party would need 10 Republicans to back any legislation to get it to President Joe Biden’s desk.

Multiple Democrats predicted that both chambers will want to vote to codify abortion rights in the wake of POLITICO’s coverage of the draft opinion. That move, which vulnerable Democrats like Slotkin and Sen. Maggie Hassan (D-N.H.) also backed Monday night, would force Republicans to choose a side, even if the vote ultimately goes nowhere in the Senate.

The House already passed legislation in the fall that codified Roe v. Wade and prohibited states from enacting abortion restrictions both later and earlier in pregnancy. But the bill stalled in the Senate in February.

That vote’s 46-48 tally highlighted the uphill challenge in the Senate of even getting a simple majority on legislation to codify Roe. Sen. Joe Manchin (D-W.Va.) opposes abortion and voted with Republicans. Sens. Susan Collins (R-Maine) and Lisa Murkowski (R-Alaska), who support abortion rights, also voted against the legislation while introducing their own standalone proposal that would codify Roe without additional provisions.

Kate Irby contributed to this report.