A female army officer has become a source of pride for Pakistan on the other corner of the world after exceeding dozens of the soldiers around the world taking part in the training session in the US.

Pakistan is leading the way to success in every field and with every gender. This had led our head high in the air to proudly say that we belong to such nation where a woman is from another community compete in the training session in another country and takes the Gold medal in her hand. 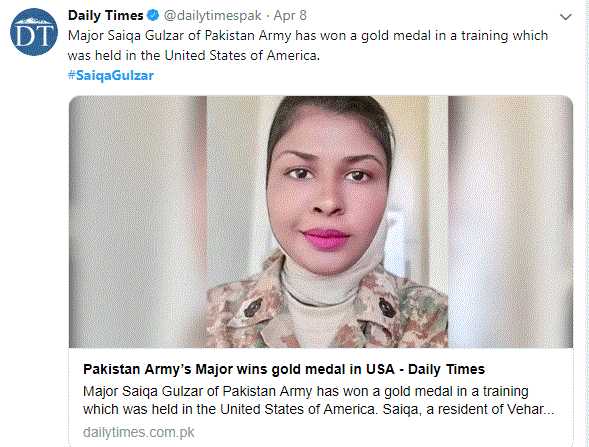 Where there is a will there is a way. Her efforts and passion made her achieve such records in this field. Yet no appreciation or news have been breakthrough on the news media yet when it got the break social media was on the bid to congratulate her on this huge success. It’s our honor to have such a lady in the nation who is the inspiration to others.

Major Saiqa Gulzar came above among 52 other soldiers to win a gold medal during her training in the northern American country. She belongs to the Christian community in Vehari. She is the daughter of a local teacher Gulzar Masih Sidhu. It’s not the wealth which makes you noticeable it’s your dreams and idea who do so either you belong to any part or caste of the world.