Hurricane Micheal is still a few hours away from making landfall in Panama City, yet there have been reports of trees down on roadways in Gadsen county. (Via: CNN)

Ian Sears, the man who flies through Hurricanes, says Micheal is the strongest hurricane yet

Hurricane Hunter and Flight Director for National Oceanic and Atmospheric Administration, Ian Sears, had an up close experience with Hurricane Micheal as he flew through the storm on Wednesday morning.

He said, “This is a powerful hurricane, probably one of the strongest that I have ever flown through.” (Via: CNN)

Panhandle; Tropical storm condition spreads as Micheal nears and is getting stronger

As Micheal is closing in on Panhandle shores the tropical storm conditions are spreading across the area.

Strong wind gusts have also been reported with speeds up to 58mph according to Apalachicola airport.

A rise in water levels has also been observed by the National Ocean Services with the storm getting stronger and not slowing down. If the storm intensifies further it has a high chance of turning into a category 5 hurricane before landfall. (Via: CNN)

Tornadoes are common when a hurricane or tropical storm comes from the Gulf of Mexico than landfalls from the Atlantic side.

A tornado warning has been issued by the National Weather Service to keep a watch at right front quadrant of the Hurricane Micheal till 5pm ET. The watch is likely to expand to northeast with time extension till this afternoon.

Residents in the County are being notified by the officials that it is too dangerous for them to respond calls although, Panama City fire-department will respond to life-threatening emergencies at this time.

Hurricane Micheal is still hours away from landfall however, onshore flooding has begun in Okaloosa County, Florida.

Around 1000 people will be responsible of conducting search and rescue efforts and 19,000 people are ready to get power back to the affected areas. (Via: CNN)

The deadly surge in Florida has begun

Shell Point, Florida, which sits near the top of Apalachee Bay is projected to get over nine feet of storm surge. The tide monitor at a weather station there is showing a steep increase in water levels — and low tide will occur around 9:50 a.m. ET.

Shell Point, Florida, near Apalachee Bay is expected to receive over nine feet of storm surge. The tide monitor at a weather station shows a steep increase in water levels and low tide is set to occur around 9:50am ET. (Via: CNN)

Florida shuts down sewer systems in preparation of Micheal

The whole sewer system for Apalachicola, Florida, was shut down yesterday at 5pm ET.

Apalachicola Mayor Von Johnson said, “We don’t want to get back to the city and have to pump the bay out of the system that came in from the storm,” further adding, “Besides that, there’s no staff” to operate it. (via: CNN)

The Hurricane “Micheal” which is set to hit Florida has turned into a monstrous category 4 storm, hours before it makes the landfall.

Rick Scott, Florida’s Governor, has warned state residents that “this storm could kill you” and has urged residents to cooperate with the officials while dispatching 2500 Florida National Guard Troops on Tuesday. So far, more than 370,000 people have been told to evacuate and move to higher grounds as the storm Micheal has sustained winds of 130mph (210km/h) and is said to hit Florida around midday.

Storm surge can occur before, during, or after the center of a storm passes through an area. I’m asking all Floridians to stay vigilant throughout tonight and tomorrow as we brace for Hurricane Michael to make landfall.

Including Florida, Alabama and Georgia have declared a state of emergency. While in Central America, at least 13 people have reportedly died due to storm, rains and floods.

The National Hurricane Center in Miami has warned of life-threatening storm surge, heavy rainfall and hurricane force winds and that some parts of Florida may experience storm surges of up to 13ft. Additionally, NHC did mention that Micheal is expected to weaken after making landfall as it moves across South-Eastern United States. 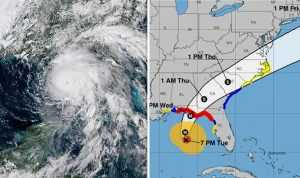 According to National Weather Service, more than 300miles of coastline are under threat and Alabama under the possible threat of being hit by tornadoes.

Moreover, President Donald Trump, during his address to a global association of Police Chiefs in Orlando, reassured that the Federal Government is ready and urged the residents to be prepared for the worst.