UAE, a region that does not stand out in popularity for gaming culture is actually making a very loud statement. The gaming community in UAE across all platforms (PC, Xbox, PS, etc.) is constantly on the rise and has become a pride for the Middle Eastern part of the world.

The gaming market experts, Newzoo, mentioned that UAE stands at 36th position in global rankings and contributes over $313million to the gaming market.

Gaming fanaticism is so much so that local competitions are being held at gaming cafes, universities and malls. The competitions not only include the most famous titles (Fortnite, CS:GO, DotA, LoL etc.) but also car racing and dancing games. To further benefit from the ever growing gaming industry, Dubai is taking the initiative to build its own gaming arena being called as “Dubai X-Stadium” which is said to host the most popular e-gaming tournaments.

Dubai X-Stadium is a joint initiative between Dubai Media Office and TECOM and is set to tap into $99.6billion video gaming industry. According to Mona Ghanem Al Marri, director general of the Dubai Media Office, “The idea aims at attracting millions of esports gamers, spectators and enthusiasts from around the world and offering them unique on-line and in-person experiences.” To which Malek Al Malek, CEO, TECOM Group added, ” TECOM Group, a member of Dubai Holding, is proud to take part in conceptualizing the Dubai X-Stadium, Where we seek to attract and harness the creativity, talent and innovation of young generations, which is largely in line with our strategic vision in TECOM Group.” 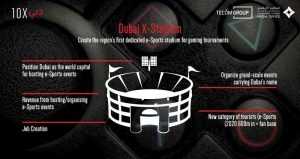 Furthermore, a game development workshop is also being held in Dubai which has been setup by Insitute of Strategic Dialogue in partnership with National Film and Television School. The workshop is set to cover topics such as Unity Fundamentals, Animation, Scripting and Programming, Level designing and more. The workshop is set to take place on October 9th till 17th in Dubai Knowledge Park.