Meng Hongwei, the head of interpol and former Vice Minister of Public Security in China, who had disappeared shortly after landing in Beijing is being held and investigated against corruption charges, according to the statement from Chinese Ministry of Public Security.

The allegations against Meng by the Chinese government are; accepting bribes and committing unspecified other crimes.

While the Chinese authorities were silent about his whereabouts a statement released on Sunday said, Meng was “under investigation” by the National Supervisory Commission, the country’s top anti-corruption unit but further information regarding Meng was withhold. 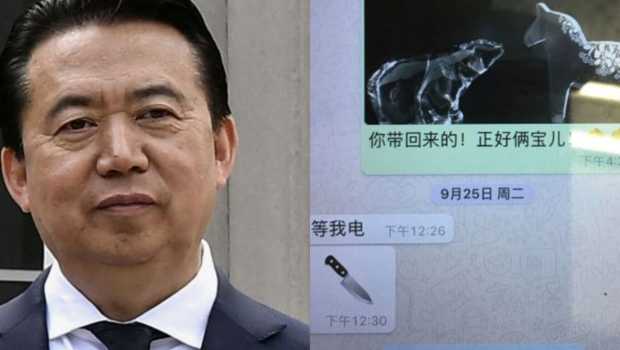 The whereabouts of Meng put his wife, Grace’s life in jeopardy who reported him missing to the French authorities and received a message on 25th September to “wait for my call” with a knife emoji. Moreover, according to a Hong Kong based newspaper known for its ties with Chinese government, mentioned that Meng was “taken away” for questioning whereas, in a separate development, Interpol said it had received Meng’s resignation from the international police agency.

However, Meng isn’t the only who has been vanished against corruption charges, Fan Bingbing, one of China’s best known actresses made recently made a reappearance after a lengthy disappearance and admitted to tax evasion and promising to pay a hefty fine.

The current Chinese President is living upto his promise of catching both “tigers and flies” as he has brought down high level officials such as former Zhou Yongkang and recently Meng Hongwei.

Currently, Kim Jong Yang is the Interpol’s acting president following the disappearance and resignation from Meng and will remain so until the organization’s general assembly picks a permanent president. Which will be next month.