Yemen, the poorest country of the Arab World is into war from last three years. At first, it was said to be a civil war but with intervention and coalition of Saudi Arab and its allies, the war has gone international with all eyes on it. Two major belligerents of this war are the Shitte Muslim group Houthis and the internationally recognized government of Yemen, which is actually backed by Saudi Arab. One thing you need to know here is Yemen is the Sunni-majority country, which has seen the invasion of Houthis, the Shitte Muslims at first dominating who were only dominating in Northern Yemen. Before you got to an opinion, you should be noted here that this war is something more than a Sunni-Shia conflict.

This war has turned uglier with every passing day with the major victim being the innocent civilians of the country. Over millions have been displaced, thousands of them being killed, hundreds of them dying due to famine and the outburst of disease Cholera. UN has alarmed about the worst humanitarian crisis in the country but seems no one is ready to pay heed upon that.

Up the latest, Northern Yemen was struck with the air strike on the children bus that resulted in the death of 51 including the 40 children. The attack was launched by none other than the Saudi-led Coalition, who was eyeing to target the Houthis in the Northern Yemen area. UN condemns this attack as the worst air strike in Yemen since the war broke out three years ago. The aftermath video from the sight of airstrike shows parents searching for their beloved ones, and mourning with seeing them dead or even in the critical condition to an extent as they lost their limbs and other parts of the body as well. 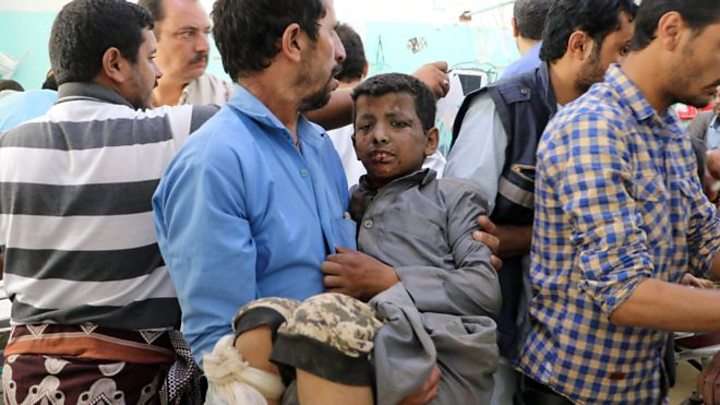 The media controlled by Houthi rebels captured the video and photos of the sight and also the massacre it has caused to the young children travelling in the school bus. The eyewitnesses have confirmed the Houthis stance and so the dozens of videos and photos from the sight have made everyone believe so. The videos captured right after the airstrike also show bus into fire and ashes, and the dead and critically injured children all covered with blood and dirt. People can be seen screaming founding their beloved ones and then mourning with seeing them without life. Responding to all that, Saudi coalition have asserted that they have quality measures and the one they targeted wasn’t the children bus.

UN calls for investigation and Peace 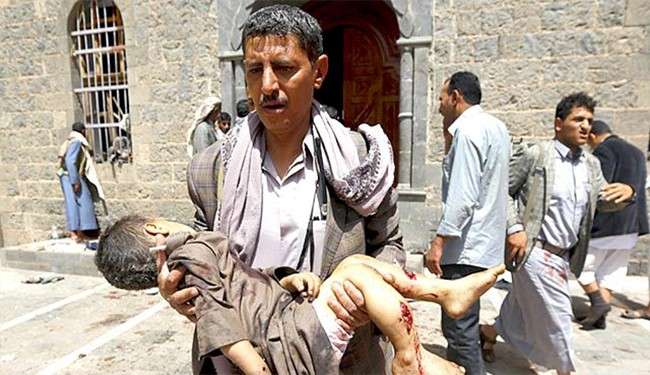 The UN Secretary General has called for the independent and prompt investigation into the matter and also told both the belligerents not to breach the international humanitarian law. Moreover, the UN humanitarian coordinator in Yemen has offered to be an intervener into all this crisis and let this solved through the dialogues on peace.

The outcry of civilians and rising death toll of children in Yemen have called people from all across the globe to not only condemn this matter but also to appeal the stakeholders to get on the table and solve things through peace. But what it seems as of now is the recent horrific airstrike is turning a blame game as Saudi coalition is confident about their high-quality measures, so about the one they attacked wasn’t a bus carrying children. The way things are proceeding it is hard to find someone neutrally stepping up as many of the first world countries including the US and UK are allies on Saudi-coalition in one or the other way. These big guns are actually providing the logistic aid to Saudi coalition and somehow the troops on the ground as well.

Many of the people think that Houthi Rebels came out of nowhere in 2014 and captured the Yemeni capital but that’s not a true story. They are trying to derail the government since 2000’s or most specifically 2004. They are the militia Shitte group having the stronghold in Northern Yemen but with calendars changing they got in power to overtake the Sunni-majority country. What made them even strong on the board is forming an ally with forces loyal to the former president Ali Abdullah Saleh.

On the other hand, it’s Yemen’s internationally recognized government or more specifically to be called as Saudi-backed president Abdrabbuh Mansur Hadi. It should be noted here that Hadi came in regime after running in an unopposed candidate for the president in Yemen’s elections 2012.

The things between Houthis and government have not been normal since the 2000’s, and the Shitte group has tried to gain string hold through the cold war or even with some other option. Finally, it was the year 2014, which made Houthis get in the power game.

Yemen War: Who is fighting whom?

The question, who is fighting whom as there are many countries and groups, directly and indirectly, involved in all this. Some experts call it Shia-Sunni conflict and some went on saying it as a phase of the clash between Saudi Arab and Iran.

To be very precise, this Yemen war is all about the power game. Houthi Rebels penetrating in the internationally recognized Yemeni government.

Saudi Arab has aligned in support of the Yemeni government along with its allies Bahrain, Kuwait, Egypt, Morocco, Jordan, Senegal, Sudan and Tunisia. Moreover, US, US Navy, UK, and Australia are up with the logistic support to them.

On the other hand, Houthi Rebels are said to be backed by Iran, Hezbollah and North Korea as well.

The Operation Decisive Storm was actually the beginning of the war as Saudi led coalition intervened in Yemen to strike Houthi Rebels and the Pro-Saleh forces. This was the operation to restore Hadi’s government in Yemen, initiated in 2015 and came to an end this year as Saudi-alliance vowed to deal this matter politically rather than using military power for this purpose. 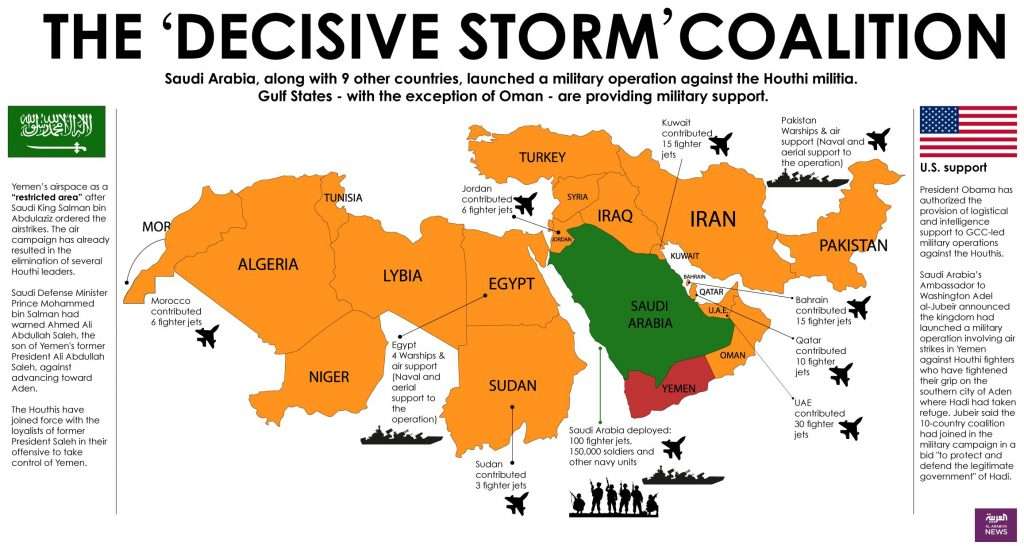 The Decisive Operation got transformed into Operation Restoring Hope, but still with here years going the Saudi-coalition are up with air strikes and military attacks.

The only question in mind is when this Operation Decisive would actually be ‘Restoring Hope’?