Women's Super League: 'We saw so many jumping on the bandwagon – will they stay on?' 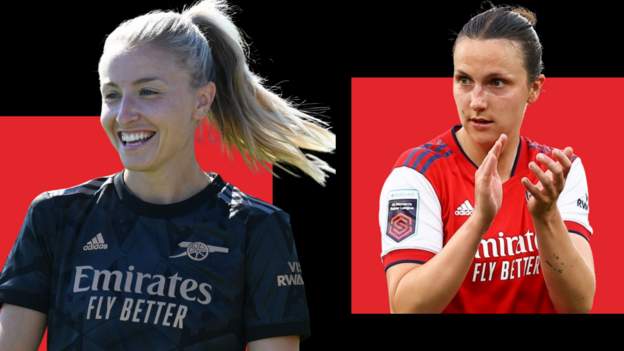 “We saw so many people jumping on the bandwagon. Are you going to stay on?”

The Women’s Super League 2022-23 season begins on Saturday and after England’s most successful year of international football in 56 years, there is an expectation for the domestic women’s league to capitalise on the momentum from this summer’s Euros victory, in order for the women’s game to continue to grow.

BBC Sport spoke to England captain Leah Williamson and her Arsenal team-mate Lotte Wubben-Moy about the Euros win, the Lionesses’ legacy and the future of the women’s game.

‘One of the single biggest moments in women’s football’

How do you sum up the moment you captained your national team to the country’s first major footballing trophy since 1966 in front of a record-breaking 87,192 fans at Wembley and 17.4 million people at home?

“I don’t want to make light of what we’ve done. I want to think about it. That’s literally the sole reason I play football, for moments like that,” Williamson told BBC Sport.

Wubben-Moy describes it as “something that would hopefully live on for days, months, years”.

“I know I’m speaking, not out of hindsight, but with foresight here. I think this is going to have been one of the single biggest moments in women’s football so far. And I hope that is taken away soon by more and more successes that we have throughout the season in the WSL. But also, hopefully our World Cup as well,” she said.

‘We know where we came from’

The way that the Euros captured the hearts of a nation showed just how much women’s football has grown in the past five years.

Euro 2017 in the Netherlands was attended by a total of 240,055 fans – a record that was broken during the group stages of the 2022 tournament in England.

But the key question now is: how that can translate to the WSL? One thing that certainly helps is its quality, and the belief of so many players, like Williamson, that it’s the best women’s football league in the world.

“If I was a fan who wanted to watch a league, this would be the best league in the world without a shadow of a doubt. I think in terms of talent and the players that we attract, we’re doing really well,” Williamson said.

“We want the best players to come and play in this league. I think it’s the most competitive league in the world, which to me makes it the best one to watch.

“The product isn’t the same as men’s football. Nobody’s asking for it to be equal in every aspect.”

This season, there’s the added excitement for fans to watch their England heroes becoming opponents in the league, which Williamson says “makes it a little bit tastier”.

‘Investment in Europe is 10 times higher than it is here’

As well as the domestic league, Arsenal have got a Champions League campaign to think about, and with it, the possibility of facing the likes of Barcelona and Lyon, widely regarded as the two best teams in the world.

This week Barcelona set a new women’s transfer record of £400,000 for Manchester City’s England midfielder Keira Walsh and Williamson added: “The talent across the world is pretty incredible.

“Other leagues might not be great or as consistent as ours with the teams, but the top teams are so good.

“We definitely have a long way to go. I’d like to think that the clubs here are investing, but the level of investment in Europe is 10 times higher than it is here.

Following the Euros win, caution was expressed by some about keeping the women’s game authentic while still appealing to a new mass audience.

“Trust us,” Williamson says, “I think a lot of us players who’ve played in a team for a while, we know those fans personally and we don’t ever want to leave them behind. We know where we came from. We plan to keep the game as accessible and as authentic as possible.”

“It’s kind of like a parent letting a kid leave home. Don’t clip the wings. Let it be what it is. And I think as players we don’t ever want to lose that connection to them. So trust that we believe in that. But let us fly a little bit.”

Aside from selling tickets and getting more fans to WSL games, Wubben-Moy says the women’s game needs to be taken more seriously in an economic sense.

“It’s about more and more partners that are getting involved for the long run, not just for the short run. That’s where we’ll see a big boost of investment and a big boost of interest,” she told BBC Sport.

Capitalising on the moment for ‘all young girls’

After the conversations about inspiring the next generation had been taken care of, the Lionesses wanted to spark practical discussions about accessibility to the sport.

Three days after the Euros final, the Lionesses penned an open letter to the two Conservative Party leadership candidates at the time, Rishi Sunak and Liz Truss, signed by all members of the squad, asking the future prime minister to give every girl in the country the opportunity to follow in their footsteps.

“We ask you to make it a priority to invest into girls’ football in schools, so that every girl has the choice,” the letter said.

It was Wubben-Moy who had the idea of writing the letter on the way back from the teams’ Trafalgar Square victory celebration.

“We had just been dancing on the on the stage in front of the National Gallery with thousands of people and I was like, ‘we need to do something'”, she said.

“The root of that letter doesn’t start with me. It starts with every young girl who once played or was not able to play. We all faced barriers to playing football when we were younger. Every single person in that team I know had to overcome something.”

Wubben-Moy says after inspiring children at the Euros, she felt they needed to capitalise on the moment.

Her captain and Arsenal team-mate agrees that taking action was important to the squad.

“We wrote our names into the history books. But off the pitch, we want to have a legacy. We have a platform – if we don’t use it, it’s a wasted opportunity. And there are things that need to change in the world.

“Women weren’t allowed to vote until after men, our [football] ban was lifted in 1971, men’s [football] was already up and running. We’re always behind and in every walk of life. I think society is changing. That’s why we speak about it being a societal change.”

Up for debate: Did Kane miss his one...