Portugal will host the finals of the inaugural UEFA Nations League in June 2019. Right after the beginning of the league in September 2018, FIFA also announced that four countries from four leagues will also qualify for the UEFA Euro Finals in 2020.

Yngve Hallén, the Norwegian Football Association President, initially confirmed the creation of third all-national football tournament for the UEFA-governed countries way back in October 2013. Besides the FIFA World Cup and UEFA European Championship, the European countries started to take part in this newly launched league since 2018. UEFA divided all of their 55 member countries into four leagues according to their recent performances at the international level.

FIFA then allocated the dates for this tournament while replacing the matches of their previous International Match Calendar.  Gianni Infantino, the UEFA general secretary, also stated in March 2014 that the newly-developed league will give the chance to less-glamorous countries to organize bigger international football tournaments. And, that scope will further benefit the overall football scenario in Europe.

UEFA also proposed to centralize the television broadcast contract since its inaugural year of the league. And while talking about this new proposal, Royal Belgian Football Association’s general secretary Steven Martens told that the lower-ranked European countries will also benefit from this Nations League due to the centralizes broadcasting contract. All the 54 UEFA member countries then unanimously agreed to take part in the UEFA Nations League during the UEFA Congress XXXVIII on 27th March 2014 in Astana, Kazakhstan. 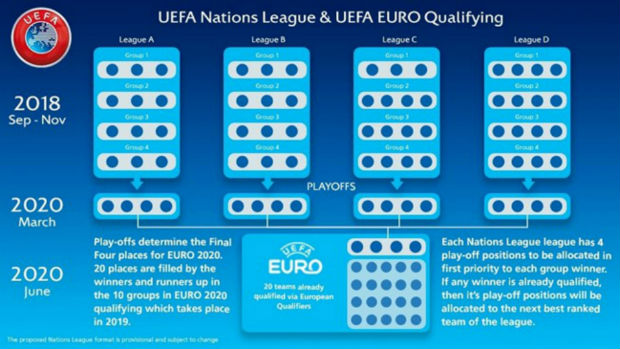 UEFA divided all of their 55 member nations into four leagues according to their recent performances. The ‘League A’ has 12 teams, ‘League B’ has 12 teams, ‘League C’ has 15 teams, and ‘League D’ has 16 teams. Besides, each league is divided into four groups having three or four countries in each group. The teams in each group will play both the home and away matches with each other in this tournament.

UEFA initially divided their 54 member-nations into four groups. But later, Kosovo joined the Nations League which made the total team count to 55. The governing body then divided all the countries into four leagues with a minimum of 12 countries in each league. The countries of each league were selected according to their recent international performances and overall ranking. The current leagues are as follows: 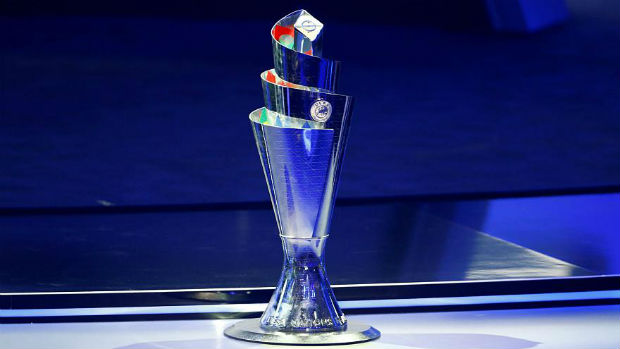 UEFA unveiled the Nations League Trophy at the ‘phase draw’ program of the league in Lausanne, Switzerland, on 24th January 2018. The UEFA Nations League Trophy actually represents all the 55 nations that are participating in this international competition. It is entirely made of sterling silver. According to the creative director of the designing agency, Hélder Pombinho, this 71 cm tall trophy is actually “As if we were watching the flags of all the nations being raised, as the high point of winning this tournament.”

Originally sung in Latin, the UEFA Nations League Anthem is the brainchild of world-renowned composer Giorgio Tuinfort and Franck van der Heijden. The Netherlands Radio Philharmonic Orchestra and Choir recorded this anthem and the Opéra de Lausanne choir performed this anthem during the phase draw. This anthem is a fusion of electronic and classical music. UEFA will use this anthem when the footballers will enter the ground to play, in television ads and sequences, and also for the commercial purpose of the UEFA Nations League.