Manchester United have reached a “verbal agreement in principle” with Ajax boss Erik ten Hag to become their next manager. The Dutchman, 52, is expected to join on a four-year deal, but an announcement will not be made before Ajax face PSV Eindhoven in the Dutch Cup final on Sunday. (Athletic – subscription required)

Manchester United are also eyeing a potential move for RB Leipzig and France midfielder Christopher Nkunku, 24, who has 17 goals and 12 assists in 29 Bundesliga games this season. (Florian Plettenberg)

United and Tottenham are both interested in the summer signing of West Brom and England’s 29-year-old goalkeeper Sam Johnstone. (Sky Sports)

Liverpool are poised to make a £25m offer for Torino’s Brazilian defender Gleison Bremer having previously expressed interest in the 25-year-old in January. (Tuttomercato – in Italian)

Manchester United face a backlash from their players over the decision to offer France midfielder Paul Pogba, 26, a new deal that would make him the Premier League’s highest paid player. (Mirror)

Napoli are determined to keep top scorer Victor Osimhen this summer despite interest in the 23-year-old Nigeria striker from Manchester United and Arsenal. (Teamtalk)

Brentford are hopeful Denmark playmaker Christian Eriksen will remain at the club beyond the end of his six-month deal, but the Bees face “fierce competition” for the 30-year-old’s signature from his former side Tottenham. (90Min)

‘A very humble man and a modest coach’

What would Erik ten Hag bring to Manchester United?

Aston Villa have expressed interest in Germany centre-back Matthias Ginter, whose Borussia Monchengladbach contract expires at the end of the season. The 28-year-old has also been scouted by Juventus, Tottenham and West Ham. (Sky Sports)

Fulham are close to finalising a £7m deal for Shakhtar Donetsk and Israel winger Manor Solomon, 22, as a replacement for 19-year-old Portuguese attacker Fabio Carvalho, who is set to join Liverpool. (Mail)

Brentford are in talks with Shakhtar Donetsk over a deal for Ukrainian winger Mykhaylo Mudryk, 21. (Sky Sports)

Spanish defender Pablo Mari, 28, has revealed his intention to stay in Italy after his loan spell at Udinese from Arsenal ends in the summer. (Gazzetta dello Sport – in Italian)

Manchester City’s Republic of Ireland goalkeeper Gavin Bazunu is attracting interest from a number of clubs in the Premier League and across Europe. The 20-year-old will hold talks with City regarding his future when his loan spell at Portsmouth ends. (The42)

Paulo Dybala’s representatives are in talks with Inter Milan over a free transfer move from Serie A rivals Juventus, with the 28-year-old Argentina playmaker’s deal set to expire at the end of the season. (Gazzetta dello Sport – in Italian) 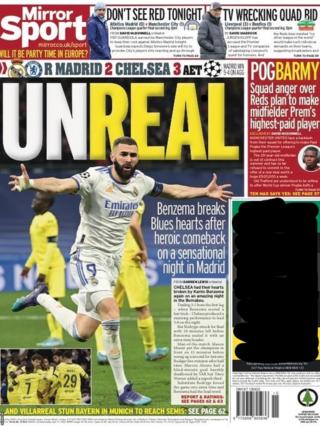 The back page of the Daily Mirror