Liverpool are considering selling Mohamed Salah if they get an offer in the region of £60m this summer, with Real Madrid among the clubs monitoring the 30-year-old Egypt forward’s situation. (Sun)

Arsenal have reached an agreement for Manchester City and Brazil forward Gabriel Jesus, with the Gunners set to pay £45m for the 25-year-old. (Fabrizio Romano)

The Netherlands midfielder Georginio Wijnaldum will be allowed to leave Paris St-Germain this summer. Leicester City are keen on the 31-year-old, while Everton, Wolves and West Ham are also keeping close tabs on the situation. (90min)

Chelsea have approached Juventus to discuss a possible deal for the Netherlands centre-back Matthijs de Ligt, 22, who has two years left on his contract. (Goal)

Chelsea’s Hakim Ziyech has handed in a transfer request while AC Milan have opened talks with the Blues over the Morocco winger, 29. (Sky Sport Italia, via Mail)

Newcastle, Everton and Aston Villa are all showing interest in Tomas Soucek, 27, with the Czech midfielder’s future at West Ham in doubt as he haggles over a new deal. (Sun)

Bayern Munich director Hasan Salihamidzic says there is no truth in rumours that the Bundesliga club want to sign Manchester United and Portugal forward Cristiano Ronaldo, 37. (Sky Germany – in German)

Leeds and Brazil winger Raphinha, 25, has turned down offers from other Premier League clubs because he wants to join Barcelona. (Sport – in Spanish)

Chelsea will listen to offers for Spain goalkeeper Kepa Arrizabalaga after the 27-year-old told Marca that his “clear objective is to play”. (Mirror)

Chelsea manager Thomas Tuchel has been promised as many as six summer signings by the club’s new owners. (Telegraph – subscription required)

Manchester United and Ralf Rangnick agreed to cut ties at the end of last season in part because of new manager Erik ten Hag’s reluctance to work with the German in his proposed consultancy role. (ESPN)

Atletico Madrid are interested in signing Spain right-back Hector Bellerin this summer after the 27-year-old spent last season on loan at Real Betis from Arsenal. (Goal)

Barcelona are hoping Tottenham can convince France centre-back Clement Lenglet, 27, to move to the Premier League so that the La Liga side can start a summer clear-out of players. (ESPN)

Tottenham and Middlesbrough are yet to agree on a transfer fee for England Under-21 right-back Djed Spence, as the Championship side want around £15m plus add-ons for the 21-year-old. (Sun)

David Beckham has spoken with Chile midfielder Arturo Vidal about the prospect of signing for his MLS team Inter Miami when the 35-year-old leaves Inter Milan. (Marca)

Club Brugge chose not to offer a trial to former England striker Andy Carroll, who is looking for a new club after leaving West Brom, as ‘insufficient medical tests’ were provided for the 33-year-old. (Het Laatste Nieuws – in Dutch)

Paris St-Germain have reached an agreement with Nice over their manager Christophe Galtier and the Frenchman is set to replace Mauricio Pochettino as head coach. (Le Parisien – in French) 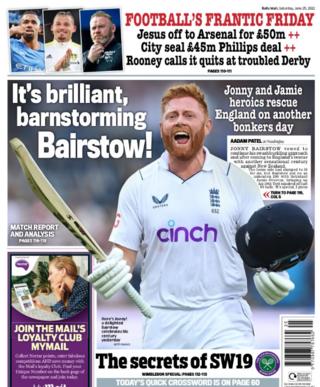