Arsenal are closing in on the signing of Brazil forward Raphinha from Leeds United, with Barcelona’s interest in the 25-year-old having cooled. (Goal – in Spanish)

Chelsea have joined Tottenham in wanting to sign Brazil forward Richarlison from Everton, who want more than £50m for the 25-year-old. (Mail)

West Ham are set to offer about £30m for 20-year-old Chelsea and Albania striker Armando Broja, who impressed on loan at Southampton last season. (Sky Sports)

Tottenham made contact with Denmark playmaker Christian Eriksen’s camp a couple of weeks ago but have not followed up interest in their 30-year-old former player, who spent the second half of last season at Brentford. (Football London)

Manchester United have had a £55m offer for Brazilian striker Evanilson rejected by Porto but the Old Trafford club plan to make a fresh bid for the 22-year-old. (O Jogo, via Mail)

Having failed to sign 21-year-old Dutch defender Jurrien Timber, Manchester United could make a move to sign his Ajax team-mate Lisandro Martinez. The 24-year-old Argentina centre-back is also a target for Arsenal. (Mirror)

Manchester United are also closing in on the £40m signing of Ajax’s Brazilian winger Antony, 22. (Sun)

What Man City would gain and what Leeds would lose

Inter will meet with Torino‘s Brazilian defender Bremer, 25, as they begin their search for a replacement. (Fabrizio Romano)

Leeds are mulling over a move for RB Leipzig and USA midfielder Tyler Adams, 23, as they prepare for Kalvin Phillip’ potential departure for Man City. (Mail)

Manchester City manager Pep Guardiola says he wants 27-year-old Portugal midfielder Bernardo Silva, who has been linked with Barcelona, to stay with the Premier League champions but added he does not like to keep “unhappy” players at the club. (Metro)

Egypt winger Trezeguet, 27, is close to leaving Aston Villa to join Turkish side Trabzonspor for about £3m. (Mail)

Nottingham Forest boss Steve Cooper, who guided his side to promotion into the Premier League last season, is on the verge of signing a new long-term contract with the club. (Nottinghamshire Live)

However, Forest are set to miss out on Awoniyi as he is planning to turn them down amid interest from a number of other clubs. (Football Insider)

Denmark midfielder Pierre-Emile Hojberg has been linked with a move away from Tottenham but Spurs have no intention of selling the 26-year-old. (Football London) 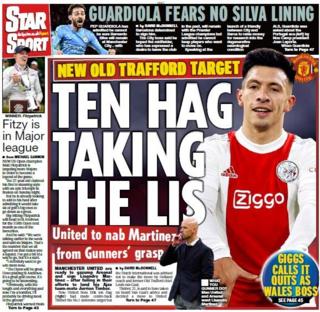 The back page of the Daily Star