Paris St-Germain have made an offer to France midfielder Paul Pogba, 29, as he enters the final months of his Manchester United contract – but the Ligue 1 club have offered less money than United. (MEN)

Real Madrid remain confident of signing 23-year-old France forward Kylian Mbappe from PSG this summer, despite reports suggesting he is close to agreeing a new deal to stay in Paris. (90min)

Tottenham’s England striker Harry Kane, 28, would be curious to listen to any offer from Manchester United this summer before making a decision on his long-term future. (The Athletic – subscription required)

Wales forward Gareth Bale, 32, will leave Real Madrid at the end of the season, but no decision has been made on where his future lies, his agent has said. (Deportes Cuatro, via Mirror)

Manchester City are hopeful of agreeing a new contract with 21-year-old England midfielder Phil Foden before the end of the season. (90min)

Manchester United’s search for a new manager at an advanced stage, with the final decision between Ajax coach Ten Hag and PSG’s Mauricio Pochettino. (The National)

Dutchman Ten Hag is in active communication with United and has received information, including the club’s transfer budget and potential signings. (Fabrizio Romano, via Express)

And former England manager and United assistant manager Steve McClaren is under consideration to become Ten Hag’s No2, should the Dutchman be appointed at Old Trafford. (Guardian)

But Newcastle are set to miss out on one target as AC Milan have agreed terms with Lille’s 22-year-old Dutch centre-back Sven Botman following talks in the last week. (90min)

Despite interest from Manchester United and Liverpool, Uruguay defender Ronald Araujo, 23, is close to agreeing a new long-term deal with Barcelona, his agent has confirmed. (ESPN)

Tottenham are expected to trigger their option to sign Sweden winger Dejan Kulusevski, 21, from Juventus at the first opportunity this summer. (Mail)

Spurs can exercise a clause to sign Kulusevski permanently for £25m, rather than wait until his loan expires, when the option could cost £33.5m. (Times – subscription required)

Chelsea’s 23-year-old United States winger Christian Pulisic has dismissed speculation linking him with a move away from Stamford Bridge. (Metro) 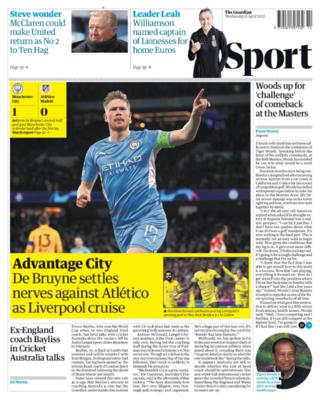