Manchester United are considering a shock move for Chelsea and England midfielder Mason Mount, 23, who is yet to sign a new contract at Stamford Bridge. (Sun)

Manchester United are pursuing a deal for Benfica’s Uruguayan striker Darwin Nunez, 22, who is rated at £68m. (Talksport)

Newcastle are set to make a bid for Everton striker Dominic Calvert-Lewin, with Manchester United and Arsenal also expressing an interest in the 25-year-old England international. (Mirror)

Real Madrid are close to agreeing a deal with Monaco for 22-year-old France midfielder Aurelien Tchouameni, who has turned down offers from Liverpool and Paris St-Germain. (Goal)

Manchester United’s hopes of signing Frenkie de Jong look to be over after the 25-year-old Netherlands midfielder opted to stay at Barcelona. (Times – subscription required)

Tottenham will rival Nottingham Forest for the signature of Middlesbrough’s 21-year-old England U21 full-back Djed Spence, who spent last season on loan at the City Ground. (Telegraph – subscription required)

Barcelona boss Xavi has held talks with Wolves and Portugal midfielder Ruben Neves, 25, over a potential transfer. (Sport – in Spanish)

What can Scotland expect from traumatised Ukraine?

Half the squad have not played since December…

Arsenal remain interested in Leicester midfielder Youri Tielemans with the 25-year-old Belgian expected to leave the club this summer, but two other clubs are also in the race. (Fabrizio Romano)

Miguel Almiron’s agent insists the 28-year-old Paraguayan forward will not be leaving Newcastle United this summer, with his release clause reportedly set at £60m. (Chronicle Live)

Inter Milan are to hold talks with the lawyers of Chelsea striker Romelu Lukaku, 29, to explore a return to Serie A for the Belgium international. (Guardian)

Georgian goalkeeper Giorgi Mamardashvili, 21, who is currently at Valencia, is on the radar of Tottenham. (Marca)

Brentford are also lining up a move for Kristensen to add to their Danish contingent. (Sun)

Liverpool are set to beat Leeds to the signing of 18-year-old Scottish defender Calvin Ramsay from Aberdeen. (Leeds Live)

Barcelona have made France international defender Clement Lenglet, 26, available for loan with a number of Premier League clubs interested. (Sport – in Spanish) 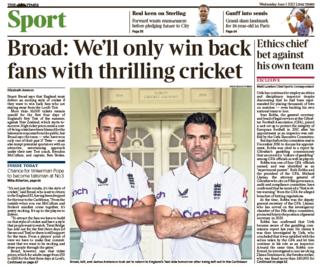