Christian Eriksen’s former club Tottenham and Manchester United are considering signing the Denmark midfielder, 30, on a free transfer this summer after seeing his return to top form at Brentford. (Mail)

Liverpool manager Jurgen Klopp says he is “happy” with how contract talks are developing with the club’s Egypt forward Mohamed Salah, 29. (Liverpool Echo)

There remains optimism Liverpool could sign France forward Kylian Mbappe, 23, from Paris St-Germain this summer – should Salah decide to leave the club. (FourFourTwo)

Mbappe says remaining at PSG is also still an option, despite his contract expiring this summer. (Mirror)

Roma’s England striker Tammy Abraham, 24, has hinted at a possible return to the Premier League. (Talksport, via Mail)

Real Madrid will look to loan out 31-year-old Belgium winger Eden Hazard for the start of the 2022-23 season. (AS)

Is £113m man finally on edge of greatness?

Is Atletico Madrid’s Joao Felix showing he can be one of the world’s best?

FC Cologne’s Timo Hubers is a £6m target for Newcastle, Leeds and Crystal Palace this summer, while West Ham, Southampton and Fulham are also monitoring the German centre-back, 25. (Mail)

Newcastle have been told £25m will be enough to tempt Union Berlin into selling Nigeria striker Taiwo Awoniyi this summer, although West Ham and Southampton are also interested in the 24-year-old. (Bild – in German)

Barcelona have arranged a meeting with Ousmane Dembele’s agent over a new contract for the France winger, 24, who was set to become a free agent in the summer. (Marca)

The Manchester United dressing room is split over the possible appointment of Ajax’s Erik ten Hag as the club’s new permanent manager. (MEN)

When Juan Mata’s current Manchester United deal runs out in June the former Spain midfielder, 33, has no plans to retire or join United’s coaching staff. (Fabrizio Romano, on Twitter) 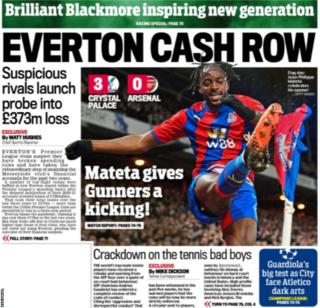 Back page of the Daily Mail