Newcastle United have made contact with Philippe Coutinho in a bid to thwart Aston Villa’s attempts to sign the 29-year-old Brazil attacking midfielder on a permanent deal from Barcelona. (Goal)

West Ham are lining up a summer move for Aston Villa and England striker Ollie Watkins, 26, with the Midlands club likely to demand a £50m fee. (Guardian)

Barcelona are targeting Liverpool forward Sadio Mane, who has been linked with Bayern Munich. The 30-year-old Senegal international is reportedly interested in a move to the Nou Camp to improve his chances of winning the Ballon d’Or. (Mundo Deportivo, via Mail)

Barca are also ready to offer Chelsea captain Cesar Azpilicueta £11m a year in wages, but are hampered by financial fair play rules so cannot offer any significant transfer fee for the 32-year-old Spain defender. (Goal)

Real Madrid have added a £340m buyout clause to Antonio Rudiger’s contract after the 29-year-old Germany defender signed a four-year deal with the Spanish giants worth £315,000 a week, on a free transfer from Chelsea. (Mail)

Leicester City expect Belgium midfielder Youri Tielemans to leave the club this summer and the Foxes are prepared to listen to offers of £40m for the 25-year-old, whose contract runs out in summer 2023. (90 Min)

Arsenal are one of the clubs being linked with Tielemans but their hopes of signing him are set to depend on whether they can finish in the Premier League top four and secure a Champions League berth. (Standard)

The story behind an innovative psychology lab

Sevilla could sign Arsenal winger Nicolas Pepe, 26, in the summer, with the Ivory Coast international valued at around £25m. (Super Desporte, via Mirror)

AC Milan are interested in Arsenal and France defender William Saliba, 21, who is on loan at Marseille. (Mirror)

Despite reports that the Gunners have begun talks with 29-year-old Egypt midfielder Mohamed Elneny, counter reports claim he has agreed a deal in principle with Galatasaray. (Fanatik – in Turkish)

France midfielder Paul Pogba will have to take a pay cut if he rejoins Italian club Juventus when his contract at Manchester United runs out in the summer. Paris St-Germain have offered the 29-year-old more, while Real Madrid are monitoring the player’s situation. (Alfredo Pedulla, via Football Italia)

Leeds United and Brazil winger Raphinha, 25, has given Barcelona his word that he will agree a move to the Nou Camp if Jesse Marsch’s side are relegated. (Todo Fichajes)

Tottenham look likely to beat Manchester United to the signature of West Bromwich Albion goalkeeper Sam Johnstone, 29. The England international, who started his career at Old Trafford, would be back-up to Hugo Lloris at Spurs. (Standard) 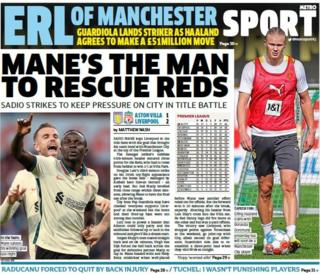