Newcastle will make a summer bid for Everton and England striker Dominic Calvert-Lewin, 25, as a priority target. The Magpies have held a prolonged interest in the player, as have Arsenal.(Telegraph, subscription)

Robert Lewandowski, 33, will not sign a new contract at Bayern Munich, and the Poland striker could be sold to Barcelona this summer before he enters the final year of his contract. (Goal)

Chelsea want to complete the signing of Sevilla and France defender Jules Kounde, 23, early in the summer window. (Give Me Sport)

Manager Pep Guardiola will run down his contract at Manchester City, which expires in 2023, rather than signing an extension this summer. The Spaniard will make a “last minute” decision on an extension. (Sky Sports, via Manchester Evening News)

Manchester City and England attacking midfielder Raheem Sterling, 27, expects to join one of Europe’s elite clubs if he leaves the Etihad in the summer, despite strong interest from Arsenal and Tottenham. (The Athletic, subscription required)

West Ham will not hold further talks with England midfielder Declan Rice until the summer transfer window has closed after the 23-year-old turned down an eight-year contract worth £83m. (Sky Sports)

Aston Villa are lining up a move for Leeds and England midfielder Kalvin Phillips, 26. (Football Insider)

Manchester United are monitoring Barcelona and Netherlands midfielder Frenkie de Jong’s situation at the Nou Camp but Barca have slapped a £70m price tag on the 25-year-old, who favours a move to a side in the Champions League. (Mail)

If Barca do lose De Jong in the summer, manager Xavi would look to replace him with Manchester City’s Portugal midfielder Bernardo Silva, 27. (Mundo Deportivo – in Spanish)

Belgium striker Romelu Lukaku, 28, wants to stay at Chelsea this summer despite an underwhelming time at Stamford Bridge since his move from Inter Milan last summer. (Give Me Sport)

Arsenal winger Reiss Nelson, 22, will hold talks with Mikel Arteta about his future after a year-long loan at Feyenoord. Other Premier League clubs are interested in the Englishman, but the Gunners remain his priority. (Fabrizio Romano)

West Ham retain an interesting in signing Manchester United and England forward Jesse Lingard, 29, who spent a season on loan with the Hammers and is out of contract this summer. (90 Min) 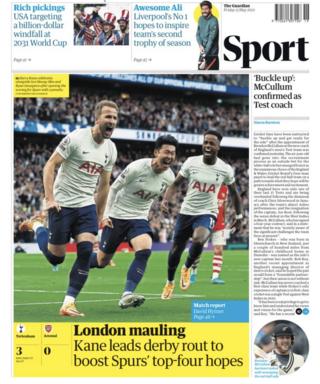