Manchester City and Kyle Walker seem extremely thankful to the Leicester City man Harry Maguire as he scored a brilliant goal for the Foxes to end the Anfield game in a 1-1 draw. And with that draw, Liverpool failed to open the seven-point gap in the Premier League table. And to mock that draw, Kyle Walker used the celebratory picture of Maguire to criticize Liverpool. 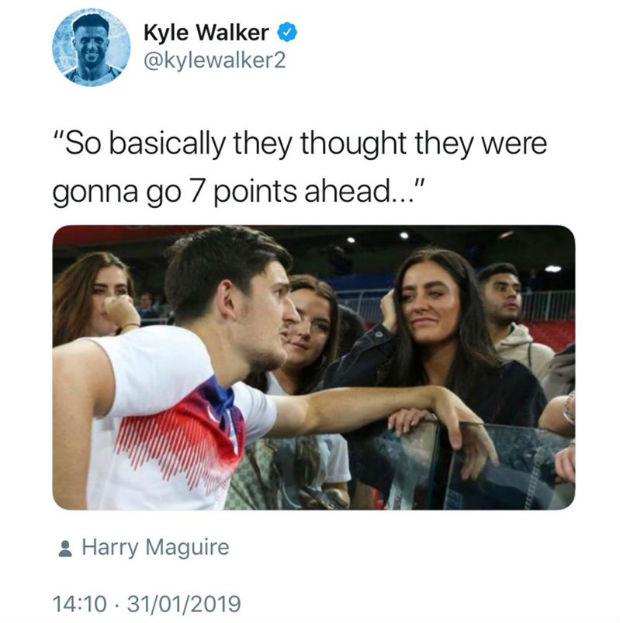 While talking about the incident, Liverpool manager Jurgen Klopp said “I don’t know what [people celebrating Liverpool drops points] that says about us, it says more about the other person I would say,” and then further added “I never celebrated when another team dropped points or lost a game, that’s not allowed.”

He said “I never asked anyone to clear one side of the pitch and leave the other in the mud,” and further added “That’s how I understand sports. You have to do your own things to try to show your best performance.” The manager then said “I don’t care, I don’t understand it. For supporters it’s a bit different, for people involved I don’t understand, but it’s nothing to criticize from my point of view because I don’t understand.”

Jurgen Klopp said “We use our brains from time to time. It’s a situation in sport, you have to create an atmosphere, mood, and belief in the team over the full season,” and added “In our case, over the last three-and-a-half years. We’ve had a lot of tight games over the years.” He said “We’ve got to finals, we didn’t lose them because of nerves. We’ve had a lot of tight situations and we have done it.”

The Liverpool manager said “We do what we always do, we handle our situation in our own way,” and further added “If you want to win something, there will be a bunch of people who hope you win and another bunch who hope you lose.” He then added “It’s better to pretty much ignore both and then hopefully at the end of the season celebrate with the people who hope you win.”