Germany conceded the opening goal of the match in World Cup campaigns last time against the same opponent Mexico way back in 1998. And, today the same thing happened when Lozano opened the score-sheet in the 35th minute in favor of Mexico. Tragically enough, Germany started their World Cup defending run with a defeat.

Mexico made a solid start today as Lozano successfully penetrated till the German penalty box in the second minute of the match which was blocked by Boateng. Werner then achieved the first attack from the German side in the 7th minute. Mexico got their first free kick in the 9th minute but Layun’s effort got straight over Neuer’s bar. The next minute Neuer made a brilliant save from a shot by Herrera. Kroos then conceded a free-kick for handball which Moreno failed to convert.

Kroos then tried a long-range shot straight into the goalbox in the 22d minute which was saved by Ochoa. Kroos then tried another free kick in the 26th minute but Mexico again cleared the ball without much effort. Germany defended their side till the 35th minute when Hernandez built a glorious attack and passed it to Lozano which the PSV man converted into goal through a powerful shot in the bottom-left corner.

In the 39th minute, Kroos again showed his prominence and made a great free-kick which was defended by even greater effort from Ochoa. The very next minute Moreno picked up the first yellow card of the game for timewasting. After one minute of added time, the first half ended in favor of Mexico. 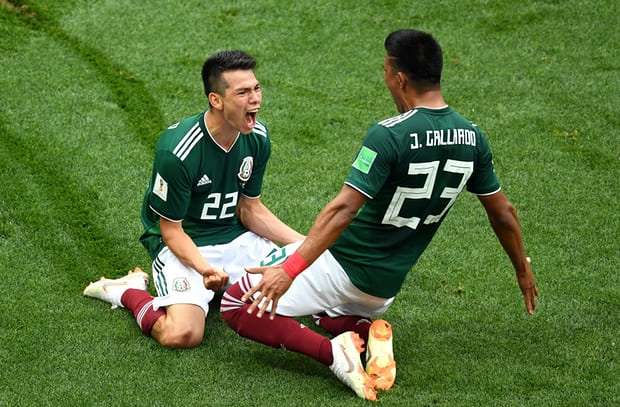 Germany started the second half with significant improvement but Kimmich continued to push forward that leaves hazardous blank spots in the German defense line. After a failed attempt by Werner for getting a free-kick, Draxler made a powerful shot which was again blocked, but it successfully won a corner in the 54th minute of the game.

In the 57th minute, Mexico made a brilliant attack where Hernandez attempted to cut the ball to Vela but he failed to keep the ball under control to covert the chance into a goal. Mexico then made a tactical change by introducing Álvarez in the 58th minute to further strengthen their defensive line. And to increase the attacking power, Low substituted Khedira with Reus in the 60th minute.

Kimmich tried an overhead acrobatic kick from a pass by Boateng which landed on the roof of the net in the 65th minute. Mexico then substituted Lozano with Jimenez in the 66th minute and Guardado with Márquez in the 74th minute. Draxler fired a powerful shot at the goal in the 77th minute which was again blocked by the Mexican defense. Gomez then came on ground replacing Plattenhardt to create more attacking power for Germany in the last ten minutes of the match.

Thomas Müller then received a yellow card in the 83rd minute for pulling Herrera’s jersey. The next minute, Hummels received another yellow as Germany started to look frustrated. Germany then used their last substitution to replace Werner with Brandt in the 86th minute. Herrera then received the final yellow card of the match in the 90th minute with Mexico achieving their much-needed victory against the defending champion. 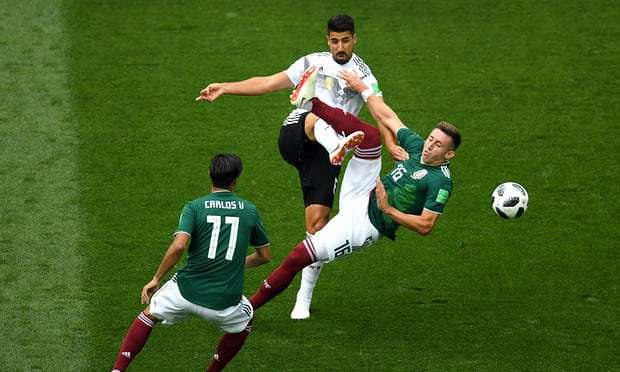