The battle at the top of the Premier League intensified as Manchester City and Liverpool both won.

The Reds beat Watford 2-0 to briefly go top before City won at Burnley by the same scoreline to reclaim first place.

Everton’s relegation concerns deepened with a 2-1 loss at West Ham, Leeds drew 1-1 with Southampton while the game between Brighton and struggling Norwich ended goalless.

But what you want to know is: who made my Team of the Week? Check it out below and then make your own selections at the bottom of the article. 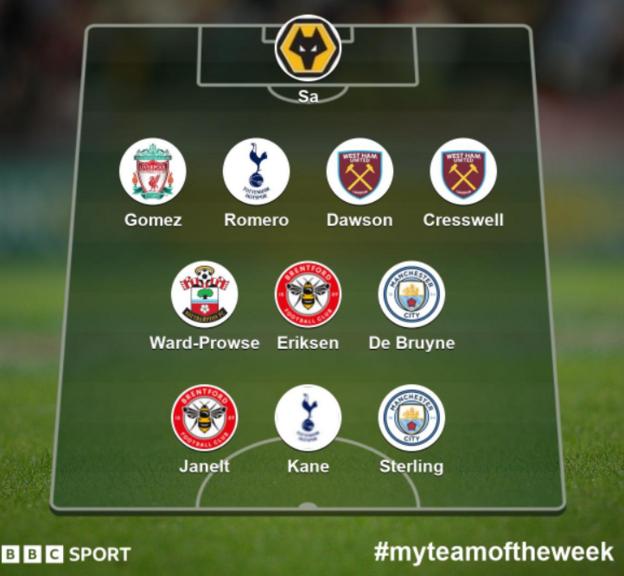 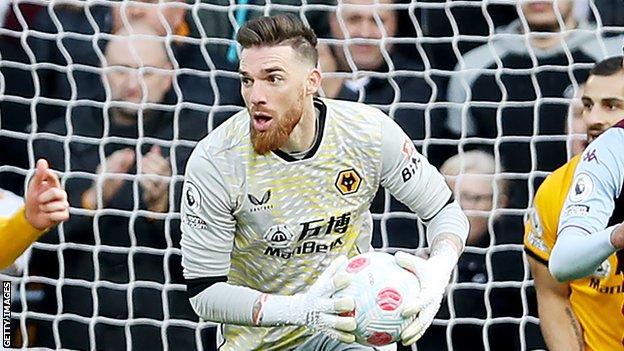 Jose Sa: What a game this was. Villa started it as though they’d forgot to put studs in their boots and looked like a team who were in a production of Bambi on Ice. Meanwhile Ollie Watkins fluffed two golden chances and didn’t seem to bat an eyelid. The Villa striker didn’t shy away from taking the penalty he was awarded having collided with Jose Sa. I thought Sa was unlucky to concede the penalty but it didn’t diminish what I thought was another outstanding performance by the Portugal international.

Did you know? Among goalkeepers with 500+ minutes played this season, Sa has the best save percentage in the Premier League (79%). 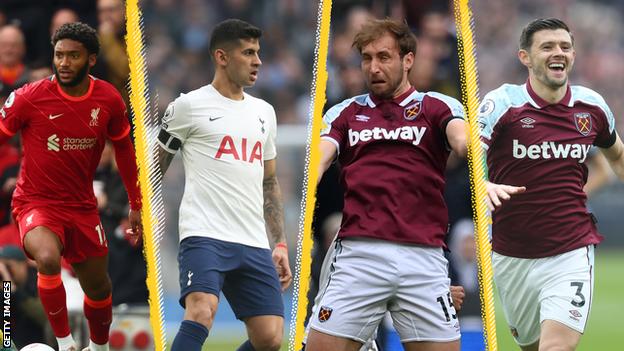 Joe Gomez: Great to see Joe Gomez back in the Liverpool line-up. Injuries have blighted his career but the way he was spraying those balls into the Watford goal area for Diogo Jota to attack was just mesmerising. Gomez needs a run of league games to get him back to the form that made him a certainty for international selection. There are very few English defenders who can play anywhere across the back four but Gomez can. He is a rare talent and on his day quite brilliant.

Did you know? Gomez’s assist against Watford was his first in the Premier League since December 2017, against Everton at Anfield.

Cristian Romero: The block on Joe Willock’s strike on goal was nothing short of brilliant. The Newcastle player looked certain to score. Romero has caught my eye before while playing for Spurs and he’s starting to look like a real player in the Premier League. The longer the game went on against Newcastle the better Romero got. Composed under pressure and very comfortable on the ball when he’s not. However, manager Antonio Conte really needs to fix this Jekyll and Hyde culture in Tottenham’s performances if they are going to secure fourth spot.

Did you know? Romero is averaging 4.5 combined tackles and interceptions per 90 minutes in the Premier League this season, the most of any Spurs player (minimum 500 minutes played).

Craig Dawson: This player is about as professional as it gets. Craig Dawson gave what was another mature performance against an Everton side who had their moments. Dawson has been around for some time but I can’t recall the defender ever letting one of his clubs down. Yes he has made the occasional error, haven’t we all, but he’s been one of the most consistent defenders in the game. West Ham currently find themselves flying high in the league and competing in the latter stages of the Europa League and Dawson looks totally at ease with it all.

Did you know? Dawson has won more aerial duels (82) than any other defender for West Ham in the Premier League this season.

Aaron Cresswell: Frank Lampard’s got his work cut out here. Everton deserved to get something out of this game and would have done if not for the stupidity of Michael Keane and the incompetence of Alex Iwobi. If Keane stays on his feet and Iwobi controls a ball an infant could have handled, Everton would almost certainly have come away with a point. As for West Ham, it wasn’t their greatest performance but they have a defender in Aaron Creswell who can strike a free-kick. The only really bright moment in the match.

Did you know? Cresswell scored his fourth direct free-kick for West Ham United, the most of any player. Cresswell had previously been level with Dimitri Payet on three. 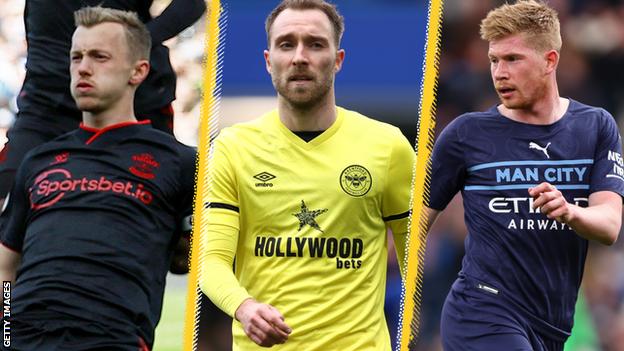 James Ward-Prowse: On current form he’s probably the best striker of a dead ball in the country. James Ward-Prowse’s free-kick against Leeds was as predictable as it was brilliant. The ball was destined for the back of the net the moment the player placed the ball on the ground. It flew past Illan Meslier. Leeds meanwhile look like they are making steady progress under new coach Jesse Marsch. They simply couldn’t continue to play the kamikaze football they were under Marcelo Bielsa, no matter how attractive it had become.

Did you know? Only David Beckham (18) has scored more direct free-kicks in Premier League history than Ward-Prowse (13), with nine of Ward-Prowse’s strikes coming away from home.

Christian Eriksen: What an extraordinary two weeks Christian Eriksen has had. He returned to international duty for Denmark to score goals against Serbia and the Netherlands, then went back to the Premier League and demolished Chelsea at Stamford Bridge. Eriksen’s return to the professional game has been nothing short of remarkable. Having almost died on a football pitch, he’s returned to full fitness and transformed Brentford’s season and with it their playing style. With 33 points on the board, this victory against Chelsea almost guarantees the Bees another season in the Premier League.

Did you know? Eriksen scored his first Premier League goal since December 2019 (for Tottenham against Norwich). He has been directly involved in eight goals (three goals, five assists) against Chelsea in the competition, with all three goals arriving at Stamford Bridge.

Kevin de Bruyne: The link between Raheem Sterling and De Bruyne looked rather menacing against a totally outclassed Burnley. If these two can remain fit City must be odds-on favourites to retain the title and reach the Champions League final. My only concern is City’s refusal to install a dedicated centre forward who both these exceptional players can play off – not to mention score goals himself. Liverpool have Mohamed Salah, Sadio Mane, Diogo Jota and now Luis Diaz waiting in the wings and all are dedicated goalscorers. Meanwhile City continue to play with a false nine. In the final analysis it could be Guardiola’s undoing.

Did you know? De Bruyne has scored 10 league goals for Manchester City this season, just the second time he has reached double figures for goals in a single Premier League campaign (13 in 2019-20). 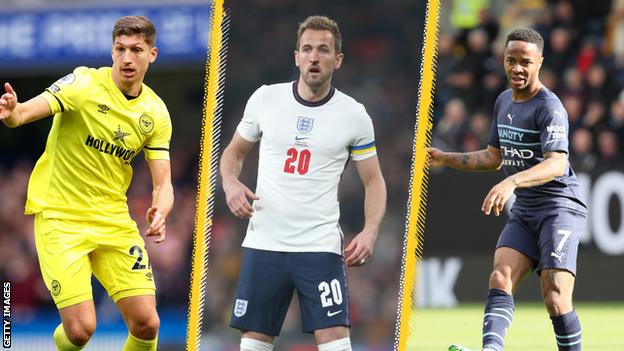 Vitaly Janelt: What a poor performance this was by Chelsea. Ivan Toney could have had two goals for Brentford before some season-ticket holders had settled in their seats. Meanwhile, Vitaly Janelt helped himself to a couple as Chelsea players’ minds seem to be on another planet. Janelt took both his goals brilliantly but it begs the question, where were the European and world club champions? Play like that against Real Madrid in their forthcoming Champions League fixture and they can kiss goodbye to retaining that trophy.

Did you know? Janelt scored his first double for Brentford in all competitions, netting as many Premier League goals as he managed in his previous 24 appearances in the competition combined.

Harry Kane: It’s not often you will find the England captain in my team of the week having not scored a single goal in a 5-1 romp. However, the game against Newcastle United has to be the exception. Kane’s second-half performance was nothing short of sensational. The Tottenham striker’s passing was so precise he could have threaded any one of them through the eye of a needle and it would have still found one of his team-mates. A wonderful individual performance by Kane. I just hope he hasn’t developed a desire for making goals instead of scoring them.

Did you know? Kane recorded his 40th Premier League assist, half of which have come in his 64 games since the start of last season; his 20 top-flight assists before 2020-21 had come in 210 appearances.

Raheem Sterling: Two assists by Raheem Sterling against Burnley highlighted yet another feature of his game that has improved since his time at Manchester City under the careful development of Pep Guardiola. The cushioned touch for Kevin de Bruyne’s goal was quite lovely while the expertly picked out delivery for Ilkay Gundogan was even better. Sterling never took the same care with his passing at Liverpool as he does at Manchester City. Like all good teachers Guardiola has fixed this and like all good students Sterling has put in the time.

Did you know? Sterling provided two assists in a Premier League game for a seventh time and for the first time since February 2019 against Arsenal.

Pick your team of the week

The Crooks of the Matter

I was struck by the comments made by former Chelsea and France defender Frank Leboeuf recently, almost pleading with Manchester United superstar Cristiano Ronaldo to consider retirement soon. The comment came just as I was about to make a similar remark in my Team of the Week but felt that the five-time Ballon D’or winner deserved more than a throwaway line about his form and was entitled to a proper analysis of what happens to a player in decline.

Old age comes to us all but its impact can be more visible in some than others. Ronaldo has scored an impressive 18 goals in 32 matches in all competitions this season but it is a far cry from his usual high standards of almost a goal every game when he was playing for Real Madrid. He’s moved his position from wide on the left where he scored and created goals for himself and others with alarming regularity, to playing up front and having to rely on quality service to provide the opportunities to score goals.

I remember reporting for the BBC during the 2006 World Cup and watching Ronaldo play against England in the quarter-finals. The game was stalemate after 120 minutes and had to be resolved via the dreaded penalty shootout. I had positioned myself behind the goal, so close to Paul Robinson I could have shaken his hand.

The pressure was unbearable but Ronaldo didn’t seem to feel one ounce of it. He literally strolled into the penalty area, calmly placed the ball on the spot and looked up at the bank of England fans behind me before putting the ball firmly into the back of the net. The nerve, not to mention the audacity, just blew me away. I had never seen confidence like it.

That confidence was supreme and came with the ability to handle any moment or occasion the game threw at him. I am a huge admirer of Ronaldo. His professionalism is beyond reproach and he has more than fulfilled the expectations required of a 37-year-old player in the toughest league in the world. However, he is still a young man who needs a purpose in life. The United States might be the place to establish that purpose. David Beckham and Ronaldo would make a formidable partnership in Miami. One thing is for sure, the five-time Ballon D’or winner doesn’t need the money.