A young boy is being praised after a parent shared the kind and heartfelt thing he did for a girl in the bus on the way to the middle-school.

The girl was on the school bus going home when, unaware of the inevitable, her period started – a pretty difficult situation for girls to deal with no matter where they are, so being in the school bus in front of all her schoolmates, must have made it even more serious and complicated.

For the girl though, her uncomfortable situation was eased when a boy quickly came to her rescue. She did not ask anyone for help, she couldn’t have, but the boy lunged forward at his own will and intent to help her. 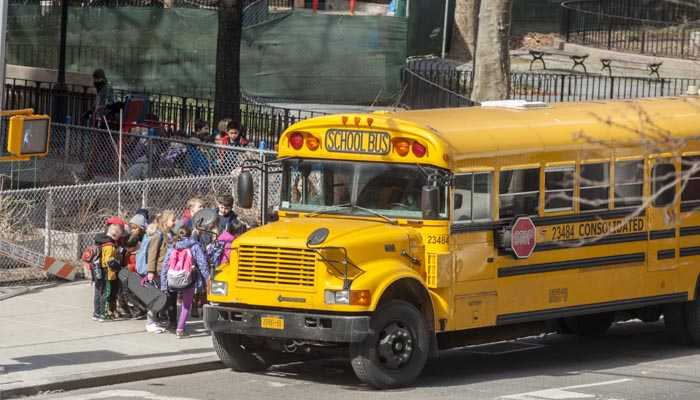 Her mother posted in the Gurgaon Moms Facebook group, saying: “My daughter started her period on the bus ride home today. A boy a year older than her, that she doesn’t really know, pulled her aside and whispered in her ear that she had a stain on the back of her pants and gave her his sweater to tie around her waist so she could walk home off of the bus.”

The mother went on to thank and praise not only the youngster for the help he gave her daughter but, the boy’s mother too for ‘raising him right’.

She continued: “She said she was kind of embarrassed and originally said its okay, but the boy insisted and told her ‘I have sisters, it’s all good!’ If you are this boy’s Mother, I want to say thank you and that you are raising him right!!”

“We hear so many bad things about today’s youth, and I wanted to share something positive!”

People have left comments admiring the boy and his kindness.

One person said: “He’s a star, not many would have done this and I’m sure he will become a gentleman in years to come and he will treat a woman how she should be treated.”

Another wrote: “Good on him. And a very well done to his parents. What a lovely young man he is going to grow up to be. If my son turns out like him, I’ll be more than happy and proud.”

A third person posted: “Well done to this boy for doing this. I hope more boys take note and behave in the same way towards any girl in the same situation in the future.”

This boy’s actions are enough to see the good in not just youngsters but in the most unlikely of places and situations. It is absolutely heartwarming but also puts faith and enhances reliability into the next generation of youngsters. 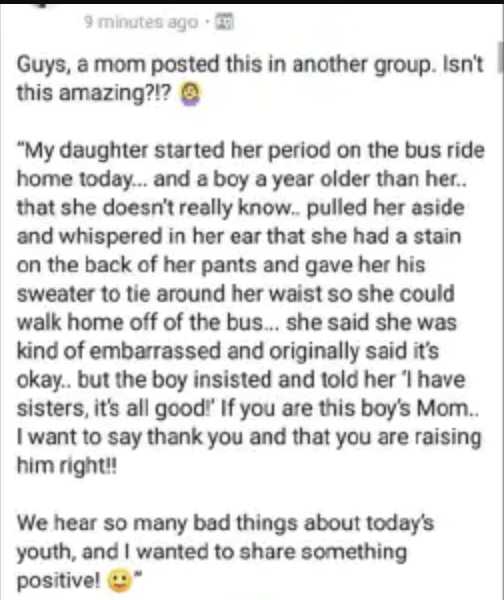 The advent of the concept of being a global citizen encourages unity, tolerance, understanding and acceptance. Be that age, gender, religion or ethnicity, and in this specific case clinical emergencies, there is a growing surge of working together and respecting each individual with the same level of humanity. These Teens will become young adults soon and then spend the rest of their lives being adults and upstanding citizens of the society and world at large, but it’s the values and morality of generosity and kindness, love for people, that will really be their guides in all walks of their mortal lives.