Pakistani Cinema has been creating and producing some of the millennium work as in the field of Cinema, Story writing, Music industry or Fashion Fest. The entertainment has done some great work and achieved some utter success. This has led to the appreciation of them and created some phenomenal awards shows. PIFFA, LUX Style Awards, ARY Style Awards, HUM Style Awards and many more are in this category. But recently from around the globe a hashtag been trending with #Metoo which signifies sexual harassment and abuse towards women in the society around the world. This hashtag has taken over the Pakistani entertainment industry and in upcoming award show LSA, most of the nominations have withdrawn themselves from their nominees under this reason of sexual harassment and abuse with women in the show.

Many of the nominees are in the support of this movement and have withdrawn themselves from their respective nominees to show their support towards their women. Whereas some of the celebrities are commenting to see both sides of the coins where there are some bad aspects there can be some good aspects too. Be positive towards your work and pursue your dream.

The nominees that have withdrawn from their respective nominee are

Model Eman Suleman on March 30 had taken to Instagram to state that she did not “wish to be part of an accolade that is shared with an alleged harasser”. She was the first to take this issue on this level. She recorded a video and posted it on her Instagram timeline. She is well known to speak up about social issues. She had published a video on her Instagram account on April 1 to inform her fans and friends of her choice to not attend the LSAs.

After this video on Monday Clothing brand Generation who is known for its support of moral and social issues and Make-up artist Saima Bargfrede have also withdrawn their name from the nomination in the award ceremony. 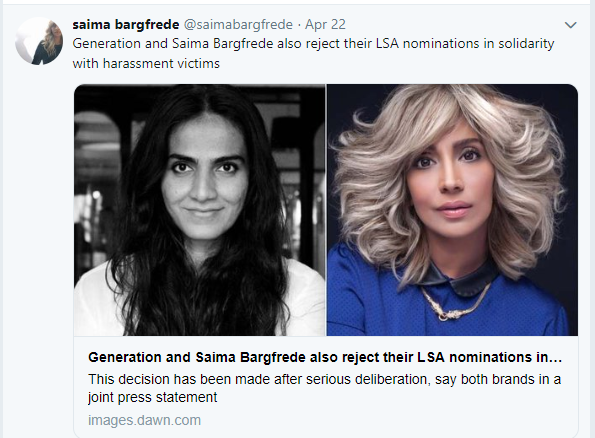 Saying “accepting any nomination or award and participating in LSA 2019 would be doing a disservice to the cause of women’s empowerment and the urgent need to address the menace of sexual harassment”. From this withdraw in LUX Style award’s make-up and hair artist category there is no nomination left. Both the celebrities have said that they don’t support such a platform and will not be a part of it in their interview to Dawn news.

After such up roaring voices one more activist for women’s rights merged up and said #Metoo in the scenario. Misha Shafi was another feather in the cap of this trend and raising voice against this abuse and threat. She tweeted that I want to thank Emaan Suleman, Generation, and Saima Bargfrede to raise their voices against it and condemns against it. She has asked LSA to remove her name from the nomination of best song Mein Bhi. Furthermore, she added her to her Instagram “Hello everyone, I’m withdrawing my nomination from LSA 2019. Thank you for your support and understanding.” 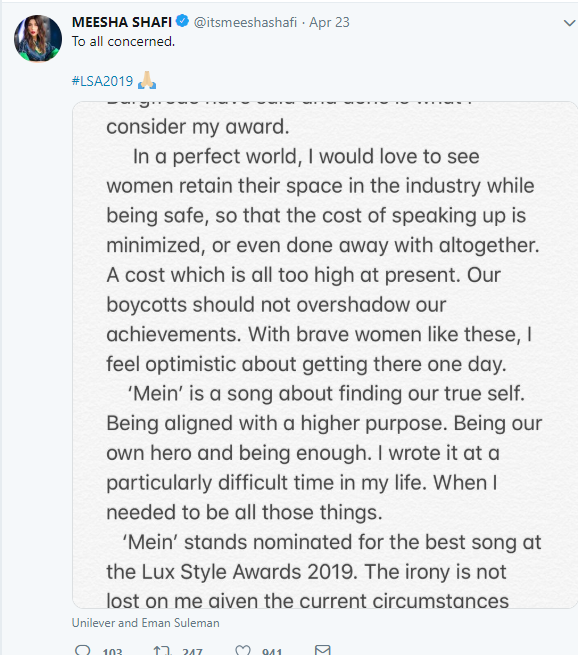 After this Jami Moor and The Sufi Folk band, The sketches have also withdrawn their names from the nomination and with that, all Jami Noor has decided to street his LUX Style award. He has updated and status a few days back on his Facebook wall saying:

And afterward, have decided to do so. This was just a gesture and answers to all calls on the industry women. Later on, he also posted the pictures of his trophy placed on the road and he also said to take this award away cause he believes in women stories and stands with them. 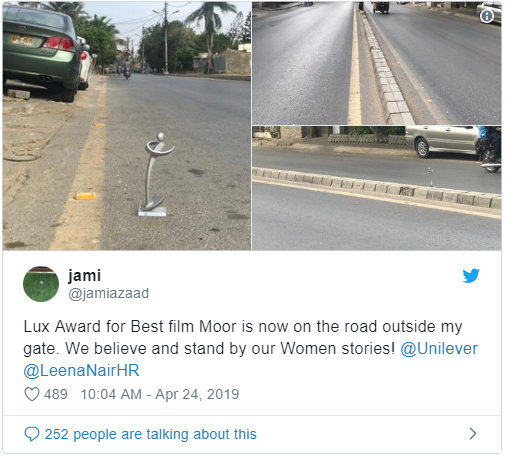 The Jamshoro-based band had been nominated for the LSAs latest award show in four categories: Best Song, Singer of the Year, Best Playback Singer, and Best Original Soundtrack.

They cited their “values and principles, which, we will not bend for any award” as the primary reason behind their move to reject the coveted award show, mentioning further that they “cannot do this if we put our conscience aside for cash or credits”.

The band vowed to “collectively stand together to challenge the current social norm that sexual abuse and misconduct can be swept under the carpet for an award for a few minutes of fame” and underscored that such decisions reveal who among the individuals and organizations “decide whether they stand with the oppressed or the oppressor”.

Last night, designer Maheen Khan also said she cannot support the awards. “I have said from the outset that the LA, in fact, all awards have lost their integrity in more ways than one. More so as a victim of sexual abuse and supporter of the #MeToo movement I cannot in all conscience support the event,” she tweeted. 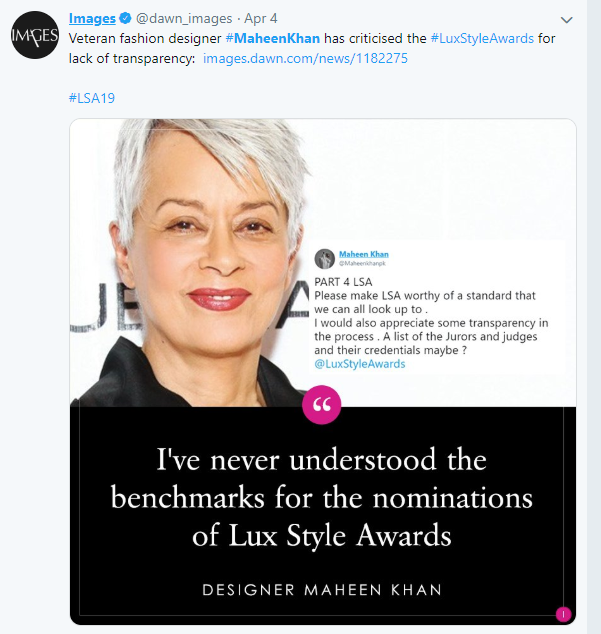 Model Rubab Ali, who had been nominated in the “Best Female of the Year” category, has become the latest nominee to withdraw from the Lux Style Awards 2019.

“I’m joining other artists in withdrawing from LSA2019 – and I encourage everyone reading this (nominated, interested or a fan) to speak up against sexual harassment in our society,” the model posted on her Instagram account.

“I’ve been in this industry for 8 years and it makes me sick in my stomach to see kind of casual harassment and inappropriate behavior towards women that gets excused in the name of social ‘norms’,” she added.

Ali joins a list of nominees to withdraw from the Lux Style Awards.

LSA answers to the denomination of celebrities

The film jury of the Lux Style Awards 2019 issued a statement early Thursday after several nominees opted out of participating in the award ceremony over the nomination of an alleged harasser.

Stating that neither “the Lux Style Awards nor Unilever Pakistan has ever intruded into the independence of the jury’s position”, the statement added, “In 2019, the Lux Style Awards have been surrounded by dialog around nominees involved in a matter of sexual harassment. The LSA film jury joins the Lux Brand and Unilever Pakistan in condemning all acts of intolerance, discrimination or harassment.”

“However, it is also important to emphasize that the decisions of the film jury were based on an assessment of the merits of cinematic work. We do not consider any other extraneous issues related to the personal characters or actions of people associated with that work,” it added.

The statement concluded, “The film jury of the Lux Style Awards appreciates the sensitivity of the subject and recognizes the intensity of public sentiment. Nevertheless, it is also important to respect that the cases are being decided by Pakistan’s judicial system. We have complete faith in the law of the land and believe that justice will prevail.”