Kardashians are all about fame game, but what if I tell you this time it’s all about their blame game as the gorgeous sisters Kourtney and Kim got into the heated exchange of words on the sets of Keeping Up with the Kardashians and later in an unprecedented move the sister-duo went on grabbing the limelight with taking up all this matter on Twitter.  The netizens had no idea what all this hoopla has actually been about. Even though the hashtag by Kourtney defined it’s something that has happened in the latest episode of KUWTK, but people were actually sure all this Twitter battle is fabricated and solely a marketing gimmick.

Knowing about the feud between the Kardashians sister would have got you the edge of your seats but you need to hang for a minute just to read that things tidy up soon enough after Khloe added few words in between and both Kim and Kourtney realized it’s all getting too much.

Those who don’t even have the slight idea what happened between the sisters would actually be eyeing to know what and how things got fiery between two most looked out for celebrities in the US. So here it’s actually you need to know, everything was going fine as always between the Kardashians until they broke up on their reality-show KUWTK and that too on the minimal issue of time management for the shoot.  The difference of opinion between Kim and Kourtney reached to such an extent that the ‘beep’ sound had to intervene to keep the conversation censored.

While things turned sour between the loving sisters, Kourtney went on calling Kim an “evil human being”, and responding to that Kanye West’s wife wasn’t coming slowly at all as she went on saying Kourtney  “the least exciting to look at,”. This all was captured on camera and ahead of the episode release of KUWTK, this went viral as the teaser of the upcoming episode.

It will be pertinent to mention here that the latest season of ‘Keeping up with Kardashians’ got the premiere on 5th August, and with this it embarks 15th season of this reality show.  The popularity and success of this show is something debatable but what one can’t take anything away from the Kardashians this as this reality show stands tall as the longest-running reality television series in the US.  Debuted back in 2007, this show was meant to work as a treat for the Kardashian fans as it brings the professional and personal lives of the celebrity sisters in focus. The show is about Kardashians, pivotally Khloe, Kim and Kourtney, and as well as half-Kardishans Kylie and Kendall Jenner.  The reality show also stars Kardashian parents, family and friends as well.

If you really talk about how it goes on with critics, it’s really a thumb down as much of its scenes and parts are termed as fabricated. The critics define this plotted storyline as ‘famous for being famous concept’.  So with hearing up all this one thing should be crystal clear for all the critics the latest feud between Kardashian sisters is not something new or something meant to be taken that seriously as this might be a tactic to grab the eyeballs.

After the scene about Clash of Kardashians got featured in the teaser, the next step onwards the ‘actresses’ tried was to prolong this battle on Twitter. Creating the mess out of nothing, both Kim and Kourtney bid their Tweet-efforts to let people actually know the 15th season of KUWTK is all up with pomp and show. The irony is most of their followers Twitterati weren’t even pleased with this action-process and even went on the suggestion the sisters to please settle up their family dispute with sitting together, not on the Twitter at least.

We would be letting you know all the Twitter war between Kim and Kourtney in their own words and last but not the least Khloe’s intervention which somehow backfired. 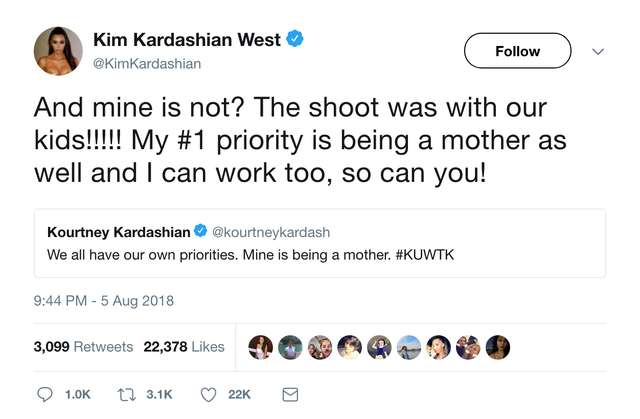 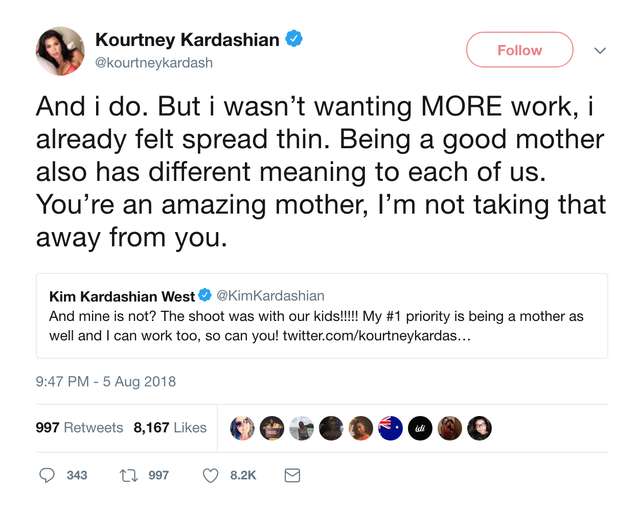 Good to have learned these boundaries this season. Lots of personal growth! https://t.co/RjnI5jBRGO

dont ever get it twisted, me, Kourtney and Khloe are GOOD! ALWAYS!!!! Never question that!

With all the Tweets pouring in it seems like things have settled well in between the Kardashians but what would make you eel quite awkward is the way Netizens responded to all that. It seems they gave no chill to it as they seem quite sure it’s nothing more than a planted tactic to get into the headlines. Here are some of the Tweets, telling how this Kardashian battle went on with the people on Twitter.

Oh wow, this is real?! Kourtney has always been the laziest of the 3. Everyone knows that

Aww. Sister fights broadcast to the public on Twitter.