The Hundred: Six young players who lit up the competition in 2022 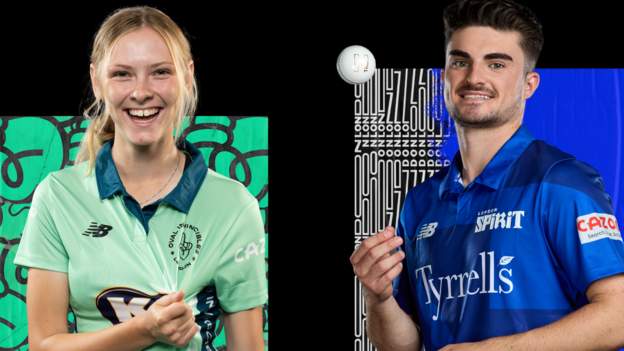 In the first year of The Hundred in 2021, teenagers Alice Capsey and Will Smeed rose to prominence with their eye-catching performances on the big stage.

Both continued to shine in 2022, with Capsey making her England debut before the competition began and Smeed making history as the first player to hit a century in The Hundred.

But what about the other youngsters who enjoyed the spotlight this year?

We have chosen six players, three male and three female, aged 25 or under, who made their mark on this year’s Hundred.

Yorkshireman Jordan Thompson, 25, has flourished at London Spirit under former England captain Eoin Morgan, having made the move south from Northern Superchargers.

The all-rounder finished the group stages as the joint-highest wicket taker in the competition with 14, alongside Birmingham Phoenix’s Tom Helm.

Morgan called Thompson a ‘big-match player’ and praised his desire to step up for his team in the crunch moments of games, with either bat or ball.

He bowls in the powerplay and at the end of the innings, and provides quick, useful runs with the bat in the lower order.

Just a few days after Smeed hit the competition’s first century, Will Jacks followed suit as he smashed 108 from just 48 balls, including eight sixes, in a breath-taking display of power-hitting against Southern Brave.

But while Smeed struggled for consistency around his century, Jacks finished the group stages as the fourth-highest run scorer, with 261 runs at an average of 43.50.

Jacks, 23, is no stranger to county cricket fans, having made his Surrey debut at 19 and been a regular in all three formats since, also bowling handy off-spin.

His form has been rewarded with a call up to England’s T20 squad for the seven-match tour of Pakistan later this month.

And with Jason Roy dropped for both that tour and the subsequent World Cup, Jacks could well have the chance to state his case as his Surrey and Invincibles team-mate’s long-term replacement as England T20 opener.

Ireland’s Josh Little has only played three games in The Hundred so far, but has certainly made them count.

The 22-year-old has the best figures in the competition, taking 5-13 to set up Manchester Originals’ victory over Oval Invincibles that secured their place in the eliminator.

He gets in just ahead of team-mate Tom Hartley. The spinner played a crucial role in taking nine wickets in the group stage, but Little matched that tally in just three matches.

Having received a call-up to the Originals side via a message from Phil Salt on social media, Little will be a key player in Friday’s eliminator against London Spirit.

At just 17, Welsh spinner Sophia Smale has been the surprise package of The Hundred and the breakout star of the women’s competition – she could be described as this year’s Alice Capsey.

Smale was a last-minute pick for defending champions Invincibles as an injury replacement for Emma Jones, but was trusted to bowl in the powerplay of their opening game against Northern Superchargers and picked up the wicket of Australia star Alyssa Healy with just her second ball.

With an Under-19 World Cup on the horizon, it would not be a surprise if Smale’s name was one of the first on England’s team sheet.

Fast bowler Arlott has been named in England squads, most recently the Test squad to face South Africa in June, but is yet to make her international debut – though her performances for Birmingham Phoenix this summer suggest a first cap is not far away.

Despite Phoenix crashing out in disappointing fashion, 23-year-old Arlott shone throughout and finished as the third-highest wicket-taker in the group stages, with nine in six games, and the only non-international in the top five.

Arlott is quick and tall, with her height allowing her to extract some awkward bounce for batters to contend with.

With the retirement of Anya Shrubsole and Katherine Brunt reaching the end of her career, Arlott joins an exciting crop of young England fast bowlers ready to step up.

Another tall fast bowler, Lauren Bell has already made her England debuts in Test and one-day internationals.

But her performances for Southern Brave this summer have reaffirmed her status as one of the most exciting young talents in the country, with a bright international future.

Bell took 10 wickets in the group stages, second to only team-mate Amanda-Jade Wellington’s 14, including 4-10 against Trent Rockets – the best figures in the women’s Hundred this year.

With pace, canny slower balls and natural in-swing, Bell possesses all the attributes – and is just 21 years of age.

What is the height of Siachin Glacier ?