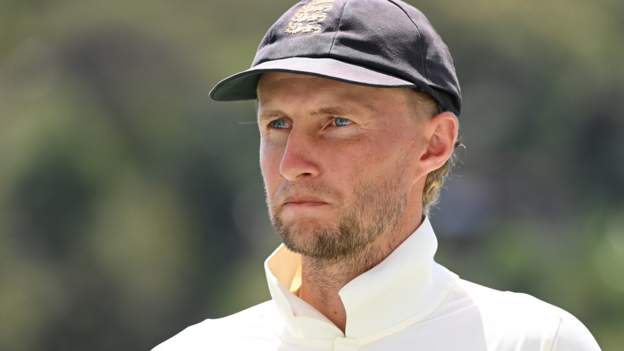 Joe Root has stepped down as England Test captain, citing the “toll” and “impact” the role has had on him.

The 31-year-old was appointed Sir Alastair Cook’s successor in 2017, and holds the record for the highest number of matches and wins as captain.

Root initially said he wanted to stay on but now says “the timing is right”.

“It has been the most challenging decision I have had to make in my career – but having discussed this with my family and those closest to me, I know the timing is right,” said Root, who has not stepped down as an England player.

“I am immensely proud to have captained my country and will look back on the past five years with enormous pride.

“It has been an honour to have done the job and to have been a custodian of what is the pinnacle of English cricket.

“I have loved leading my country, but recently it’s hit home how much of a toll it has taken on me and the impact it has had on me away from the game.”

Root’s tally of 5,295 runs as captain is the most by any England captain, and he scored 14 centuries while holding the position.

England’s second-highest Test run scorer of all time, he led his country in a record 64 Tests and has overseen the most wins (27) but also the most defeats (26).

“I am excited to continue representing the Three Lions and producing performances that will enable the team to succeed,” Root added.

“I look forward to helping the next captain, my team-mates and coaches in whatever way I can.”

‘He has led by example’

Last month’s series defeat in the Caribbean followed England’s 4-0 Ashes defeat at the hands of Australia and is their fourth series loss in a row – fifth if including the unfinished series against India, in which England trail 2-1.

England have won one of their past 17 Tests, their worst run since the 1980s.

They are in the process of appointing a new managing director and men’s head coach, following the departures of Ashley Giles and Chris Silverwood after the Ashes.

It had been expected a decision on Root’s future would be made once those positions had been filled.

“Joe has been an exceptional role model during his tenure, balancing the demands of Test captaincy whilst continuing to shine brilliantly through his own personal performances,” said England and Wales Cricket Board (ECB) chief executive Tom Harrison.

“He has led by example, and that has resulted in more Test wins than any other England captain, alongside a number of famous series home and away victories.

“Joe’s leadership qualities were exemplified by how he led the team through some of the most difficult and uncertain times we have known, playing during the pandemic all over the world, which speaks volumes for him as a leader and as a person.

“I know that every single person who has played or worked under Joe’s captaincy will speak of his integrity and humility as a person, as much as his determination and example as a leader.

“Off the field, Joe has been no different. It has been a privilege and a huge pleasure to have worked with him in his capacity as our Test captain, and I know he’ll continue to drive English cricket forward as a senior player, offering his wealth of experience and advice to support his successor.”

I think it’s the right decision on all sorts of fronts. I think Root had run his course and there were plenty arguing for him to have gone after the Ashes, but they tried this red-ball reset – to try to move on in a new direction in the Caribbean – which went wrong.

Anyone who had been there as I was on that last day in Grenada to see England collapse again and lose that match would have realised that it was time for change. It’s not the captain’s fault that England batted badly – they batted badly throughout his captaincy – it was just an indication to me that the team needed a new direction.

I’m not surprised by this news. It is the right thing. I interviewed him after that game and he looked exhausted. There is so much more to this job than simply leading a team out on to the field. It’s a massive job, a huge responsibility. No-one has done it longer, he’s got a young family.

He’s really had this job in his heart. Joe Root is a thoroughly good man and it is sad that he’s gone but England captains are like prime ministers – you walk into the Downing Street waving and cheering and everyone is glad to see you, and you slip out the back afterwards in a rather unseemly exit. That’s just how it works.

You don’t really want to put these vast characters, match-winning people into these manacles that the captaincy gives you. Having said that, I don’t see any other option than Ben Stokes. If you are going to bring someone in from outside, it has to be somebody who can be sure of keeping his place.

You need somebody, in my view, who is experienced and doesn’t have to do it forever. There is a strong argument for a short-term captain, if it be Ben – but he’s got an injured knee at the moment.

Stuart Broad and James Anderson are not stupid suggestions at all. Those two are vastly experienced. The problem is that they’re aged bowlers who could fall in a heap, so then where are you? That’s the issue about making one of them captain.

Plus, they are both pretty angry that they were left out of that tour of the West Indies and that boil has to be lanced as well.

They have won one match in the last 17. There is a hell of a lot to do.

Root’s England team-mate Ben Stokes paid tribute to Root, thanking the Yorkshire batsman for having “given everything”.

Former England assistant head coach Paul Farbrace told BBC Radio 5 Live: “I think Joe has made a sensible decision. Joe has carried not only the captaincy and the team but the batting as well on his broad shoulders for quite some time. I think he has made the right decision and I’m pleased that he has been able to make that decision.

“He is such a good team person and such a good person in that dressing room, he will have no problems getting on with his job because all he cares about is England cricket. He’s not a bloke with a huge ego.

“There’s been a lot of stick about him tactically but the most important thing with any captain is that you’ve got the dressing room behind you and he’s definitely got that. We haven’t got the quality in our Test match team at the moment.

“This isn’t about Joe Root being a poor captain and why England haven’t played well, we simply haven’t got a team that is capable of challenging in the world at the moment but Joe has done his absolute best to help the team play the best they can. How he has maintained his form has been fantastic.”

Former England captain David Gower told BBC Radio 5 Live: “There’s been so much talk about the possibility and it was always a question of whether Joe would make his own decision or if someone would make that decision for him.

“He’s had time to think since the end of that West Indies tour about his role and, the stark fact is, under his leadership over the last 12-18 months, nothing much has gone right.

“At some stage you get to the point – and I remember this from all those years ago – where you realise that whatever you say or do, it’s not going to inspire a team any more. You end up saying the same thing, you end up repeating the same. Even if you have new personnel, the atmosphere remains the same.

“A lot of people, including me, had decided it was time for a new voice.”

Darren Gough, Yorkshire’s interim director of cricket, said: “I was surprised by the criticism. I think you have to look deeper than that. With everything that has been going on in English cricket, I don’t think you can blame the captain.

“He’s had a lot of criticism. I think what probably hurt him – it’s come from a lot of guys who played the game and captained England as well, some of his closest mates. Unfortunately, we’re always looking for someone to blame.

“Rather than criticise, you have to look at 27 Test wins. And the pressure he was under with the team he’s got around him, to still keep scoring hundreds in that period tells me that he’s got a strong character and he’s a great player.”

Sean Dyche: 'A huge gamble that smacks of blind panic by Burnley's owners'