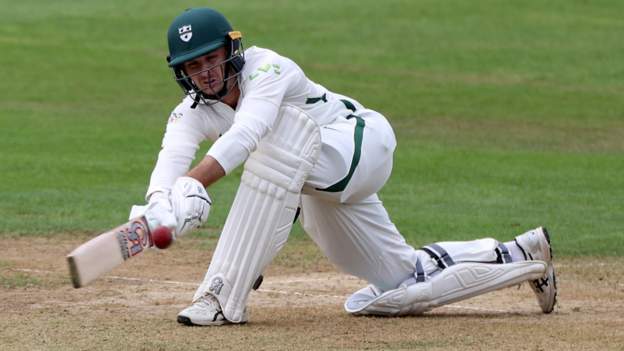 Gareth Roderick and Ed Barnard put Worcestershire in a strong position before a late wobble saw them finish on 285-7 against Glamorgan.

Roderick’s 88 not out was a cautious affair while the more aggressive Barnard struck ten fours in his 75, in a fifth-wicket stand of 127.

Timm van der Gugten (3-42) was the pick of Glamorgan’s bowlers.

Worcestershire are fighting to stay in the promotion race, while Glamorgan could go into second with a draw.

A poor weather forecast means that substantial interruptions are likely on days two, three and four at Sophia Gardens.

After the Pears chose to bat, Jake Libby (12), Taylor Cornall (16) and Jack Haynes (13) all seemed to get themselves in but failed to make headway against van der Gugten and James Harris as the ball seamed around in the first session.

Pollock mixed his usual leg-side aggression with some watchful defence in a valuable innings before he became van der Gugten’s third victim as he edged to keeper Chris Cooke.

Barnard then took the attack to the Glamorgan bowlers with the pitch looking placid in the afternoon as he and Roderick put the visitors in a strong position.

Debutant New Zealand spinner Ajaz Patel bowled a long tight spell and eventually made the breakthrough in the last over of the old ball as Barnard fell leg-before.

Brett D’Oliveira and Ben Cox fell cheaply to Harris and Michael Hogan with the new ball, before Joe Leach (16 not out) partnered Roderick through to the close.

Meanwhile Glamorgan awarded a county cap to the Championship’s leading run-scorer Sam Northeast. who has set new records for the county’s highest first-class score of 410 not out at Leicester and limited-overs score of 177 not out at Worcester.

“I’d say it’s pretty even at the end, we weren’t overly sure how the wicket would play so it was probably a good toss to lose. We started well, then when the ball got soft the wicket got nice to bat on.

“Credit to Roderick and Barnard with that partnership but it was nice to finish the day with seven wickets down.

“It feels like I haven’t played Championship cricket since last year (an injury in May) so it was nice to get the Duke (ball) back in the hand and I was happy with the way it came out. As a unit we bowled well to keep them under three an over, it was a great effort.

“We can’t control the weather so we’ll rock up, hopefully get some game time, knock over the last three wickets and have a bat.”

“It was nice to get that partnership with Gareth, it was a bit of a sticky situation when I came in so it was nice to put some big runs on, but disappointed to lose those few wickets at the end.

“In the last six weeks you can see Gareth’s confidence start to change a bit, we know that player’s in there and we’ve seen it before, so it’s nice to see him do it for Worcestershire.

“He soaked up the pressure when it got tough towards the end and made it easier for the other batters coming in.

“There was a little period before the decision was made (to move to Warwickshire) but I’m just trying to enjoy my cricket as I always do wherever I’m playing, things are going well so it looks more relaxed.”

The Hundred: Positives persist but organisers still have...