It’s been a record-breaking T20 international between Ireland and Afghanistan where due to Hazratullah Zazai’s 162 of just 62 balls, Afghanis went ahead of Aussies to set the record for highest T20i total while scoring 278 for 3. 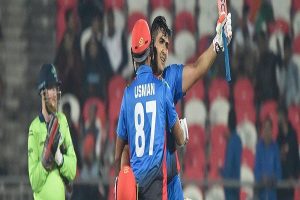 The second highest run scorer in T20i, the first player to hit the most number of sixes in the limited-over format, and the highest first-wicket partnership are some of the records which were made in today’s encounter.

The star of the show was Hazratullah Zazai who played a brilliant knock of 162 runs after facing only 62 balls. He hit 16 sixes, the most hit by any batsman in T20 internationals in a single match, and added 11 boundaries to his account. 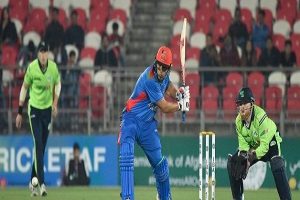 The previous highest total of 263 for 3 was set by Australia in 2016 against Sri Lanka. When such a total is amassed, it would also imply the breaking of many previous records in the short-over format.

Zazai was unable to break the record of Aaron Finch, however, for the highest score scored by an individual batsman. The top spot is held by Finch who scored 172 against Zimbabwe in 2018.

The second record which was set by the opening pair of Afghanistan Cricket Team is the highest partnership by any two batsmen for any wicket. This would also set them for the highest opening score in the T20 Internationals.

Previously, the record was held by AB De Villiers and Virat Kohli while playing for Royal Challengers Bangalore in IPL.

The Titan, Hazratullah Zazai, hit 16 sixes which was the third record set in the match of most sixes hit by a single batsman in one inning. A total of 472 runs in both innings is the third highest T20i score.

With the massive victory in today’s match, Afghanistan is leading the three-match series by 2-0. The third and final match of the series will be played on 24th February 2019 at the same venue.