Here is to show you an adorable wrestling match. This match is between an adorable black and white kitten and a yellow duckling. The cat is good in size and knows all the necessary techniques. On the other hand, the  yellow duckling is fierce and bold. Although they are in different weight categories, the fight is equal in terms of age and experience level. Both contenders began their battle. In the first round, the fragile duckling was knocked down many times by the cunning kitten. Being triumphant, the kitten felt proud. The duckling only could backed away him with the sharp kisses.  At last, the duckling got tired of being beaten down, but he was helpless in front of the clever kitten. In the most critical moments, the duckling left on his own free will to re-join his family, leaving the kitten behind. The kitten won this wrestling! This is really an interesting match to see and it refreshes our minds.

In this unique battle, the kitten dominates the duckling with hugs and kisses until the duckling is knocked down several times in the first round. 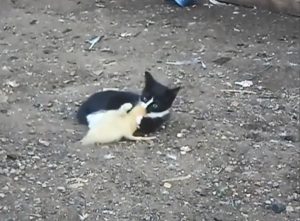 In the second round, the duckling fought back, planting kisses with his beak everywhere he could reach. 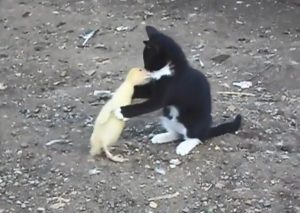 The kitten should feel lucky because mother duck did not intervene, otherwise he wouldn’t stand a chance! 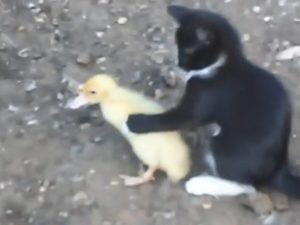 The duckling’s fierce attempts can not stop him to get victory , his consistent techniques have made him predictable. 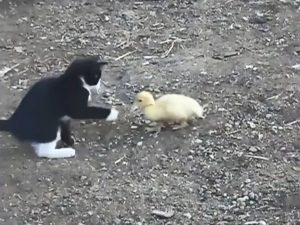 The kitten tries best to defeat the duckling, using his weight and sharp claws.  And he wins! 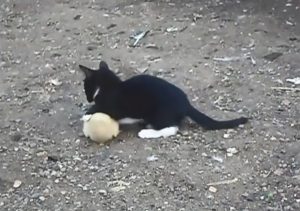 Hope you have enjoyed the match! No doubt, it’s funny and interesting.