Squirrels are familiar to almost everyone. More than 200 squirrel species live all over the world, with the notable exception of Australia. Like other rodents, squirrels have four front teeth that never stop growing so they don’t wear down from the constant gnawing. 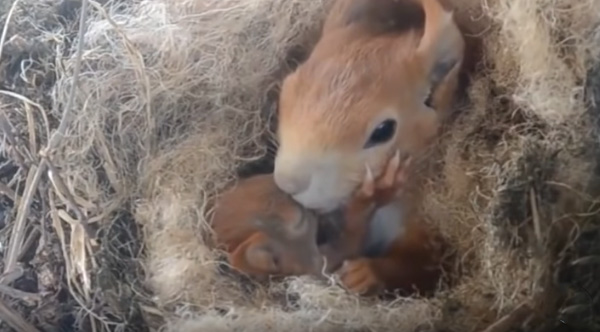 A squirrel’s development into adulthood hinges on how well its mother nurses the squirrel while it is young. When mothers nurse, they wean their young when they are old enough to gather their own food. Also, most young squirrel species do not leave their nest for at least a month after they are born.

After the nursing stage, though, most young squirrels leave their homes to find other squirrels for mating and creating their own offspring.

Here is a cute story of a mother squirrel who snuggles with her newborn baby. The whole scene was heart warming. Actually she built her home right outside this man’s window. He captured the beautiful scene in video and let us enjoy too.