Meet Skatty, a young cat in Auckland, New Zealand, is proved really lucky to his owner Paul. J. Thompson. The kitty regularly sets sail with his owner, aboard La Chica, the 32-foot craft.

Thompson is deaf, and the surroundings can get dangerous when you can’t hear the motors of other boats or the sound of waves. As Adventure Cats reports, Skatty serves as Thompson’s navigator aboard La Chica, alerting him when other boats are approaching. The cat also helped Thompson earn the distinction of becoming the first deaf person to sail across the Southern Atlantic Ocean alone except for his trusty feline. 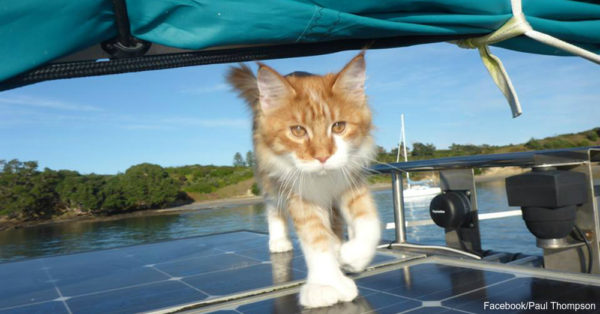 This distinction helps polydactyl sea cats maintain stability aboard boats. Some cats also have oversized dew claws that resemble thumbs. Sailors claim that the extra toes make polydactyl cats highly efficient mouse catchers. Like most Maine Coon cats, Skatty is very comfortable around water. On one occasion, Skatty accidentally fell overboard, but he was quickly rescued by his devoted owner. Although the feline can swim, Skatty wears a life vest for added security in turbulent conditions. 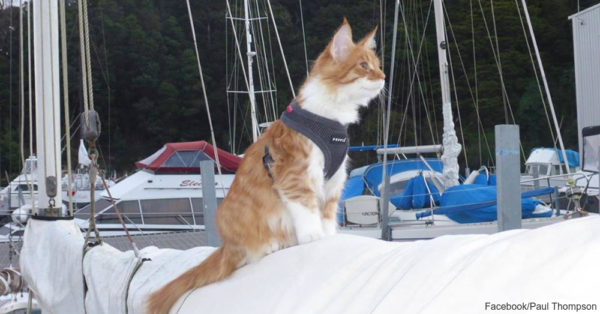 It is reported that on dry land, Skatty alerts his owner to incoming text messages by placing a paw on the phone. He also lets Thompson know when visitors ring the doorbell. In addition, Skatty visits patients in hospice care, where he brings smiles on the faces of sick and elderly patients. Skatty is an incredible shipboard companion, providing affection and assistance to his owner as they sail the high seas. Without the alert feline to serve as his ears, Thompson would face additional dangers while sailing. Hats off to this cute kitty to play such an amazing role for his owner.