India has a relatively high human-leopard conflict as urbanization has reduced the size of these big cat’s natural habitats. Smaller habitats also lead to a scarcity of the leopard’s natural prey and this could be one of the reasons which led to an increase in cases of leopard attacks on humans in recent years.

This leopard which found itself wondering in the city of Jalandhar, India was not looking to prey on humans though. It stumbled into the village by accident and became anxious and afraid of all the people around.

As a defensive measure, it started to lash out and attack anyone on sight.

In a video captured by a bystander, we can see how the big cat bit, dragged and climbed over villagers. A total of six people were injured and luckily there were no fatalities. A group of villagers had found the leopard hiding in a residential building and startled it before it went on a rampage.

The authorities were notified and the hunt for the leopard ensued. 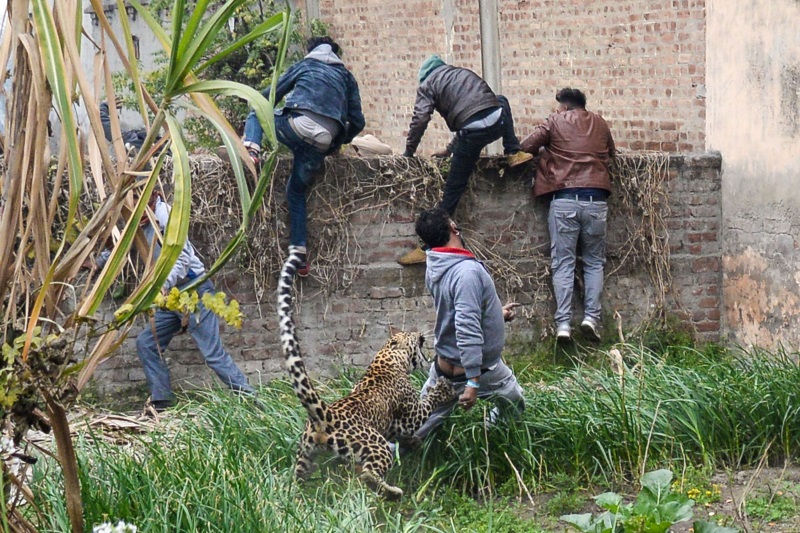 During the entire fiasco, no villager was severely injured. When the authorities had the chance for a clear shot, they fired tranquilizer darts at the leopard in hopes that it would be knocked out so they could safely capture it.

It took three darts for the effects to work on the big cat and once it was unconscious, the authorities carried it into a cage and took it to a zoo near Chabir for inspection.

Watch the harrowing clash between man and animal in the video below: