Wolves are very intelligent creatures whose upright ears, sharp teeth, pointed muzzles, inquiring eyes and other facial features instantly convey this quality. The personality traits of the Wolf are those of powerful instinct, intuition, and high intelligence. Wolf is a symbol of guardianship, ritual, loyalty, and spirit. Wolf has the ability to make quick and firm emotional attachments, and often need to trust their own instincts. Thus they teach us to do the same, to trust our hearts and minds, and have control over our own lives. The stunning animal has been featured in legends, books, movies, paintings and other products of culture for centuries which slowly taught us to appreciate them even more. So it’s understandable that people wanted to take a bit of that wilderness home.  A wolfdog is a canine produced by the mating of a domestic dog  with a gray wolf.

Meet Yuki, who is one of the highest content wolfdogs at the sanctuary where he is currently staying.“His DNA testing came back as 87.5 % Gray Wolf, 8.6 % Siberian Husky, and 3.9 % German Shepherd,” – a staff member of Shy Wolf Sanctuary Brittany Allen told. 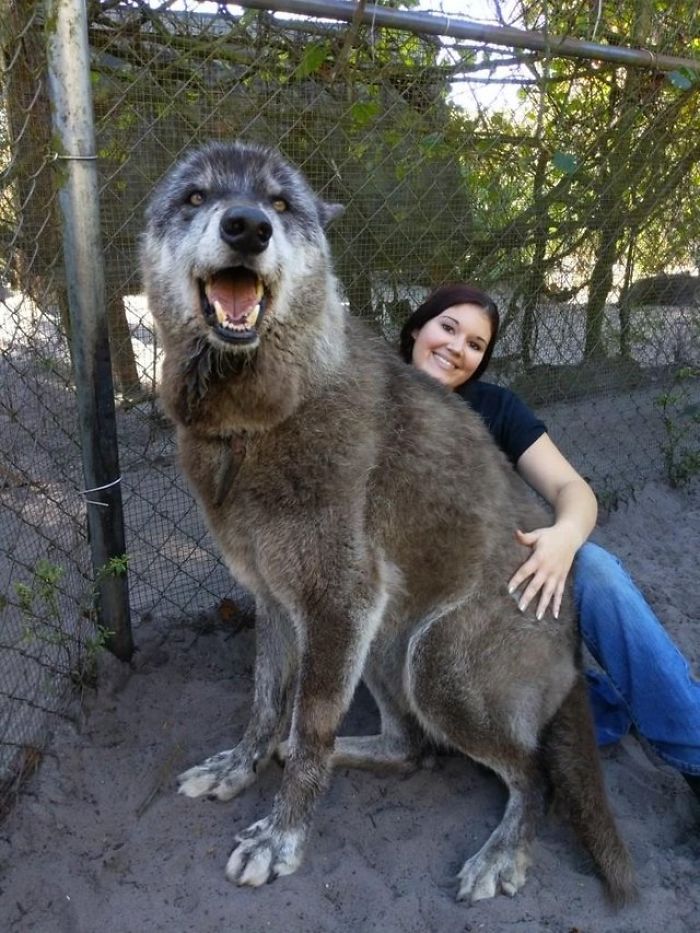 In this photo Yuki is appearing so giant it’s taking every one’s attention on the internet. The girl in the photo, Brittany Allen, said that Yuki is not actually as large as he appears in the pic and weighs around 120 lbs. She recently responded to accusations of photoshopping the image with an Instagram post along with a caption: “The face we make when people say Yuki’s picture is Photoshopped… It’s just his fat angle guys. We all have one”. 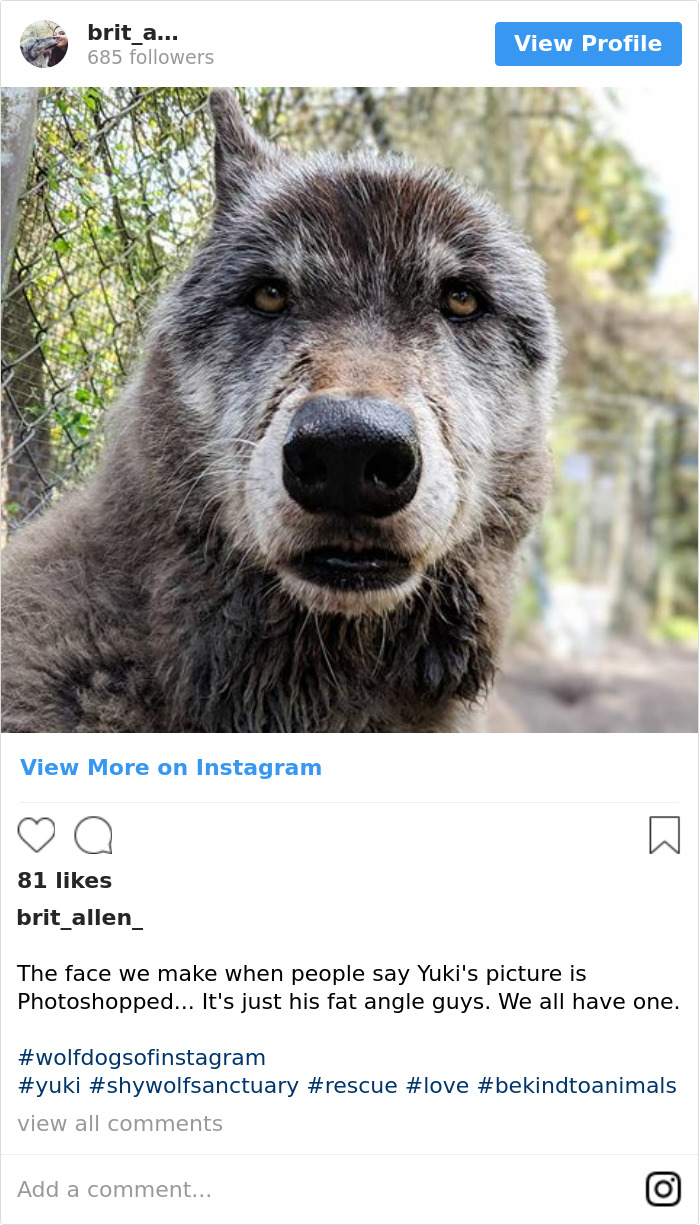 The photo has caught the attention of internet users, it helps to raise awareness and tell the tragic and heartwarming story of this majestic wolfdog. This animal received a second chance in life when he was dumped at a kill shelter and then rescued by Shy Wolf Sanctuary.

“We rescued him from a failed house pet situation. Someone purchased him from a breeder and realized he was too much to handle. They dumped him at a kill shelter at 8 months old. We stepped in and provided a home for him and he has been with us ever since,“ – said Brittany Allen. 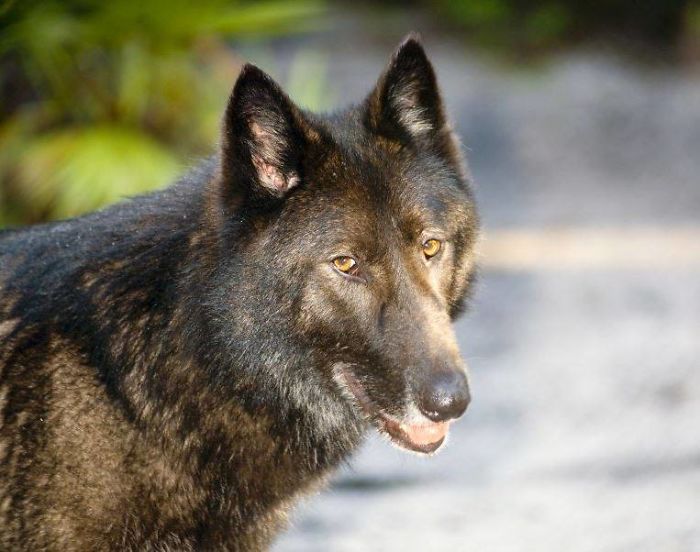 One of the directors at Shy Wolf Sanctuary shared the information, “Yuki came to us in 2008.  He was in reasonably good health compared to a lot of the animals that come to us and had a very outgoing personality initially. We even considered him for ambassadorship at one point. Shortly after arriving at Shy Wolf Sanctuary Yuki managed to catch a leg on a palmetto and opened up a wound on his right rear knee. The wound ended up taking a total of 5 surgeries to finally repair and in that time Yuki became cage aggressive.”

Volunteers of Shy Wolf Sanctuary shared pictures of Yuki at his new home from 2012 and their first impressions of his personality: “Yuki loves women, showing off to visitors, and being super goofy” 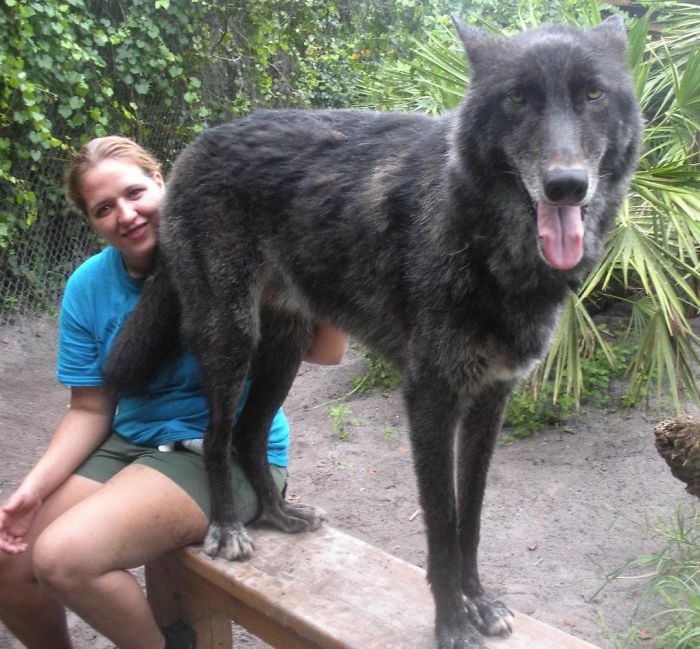 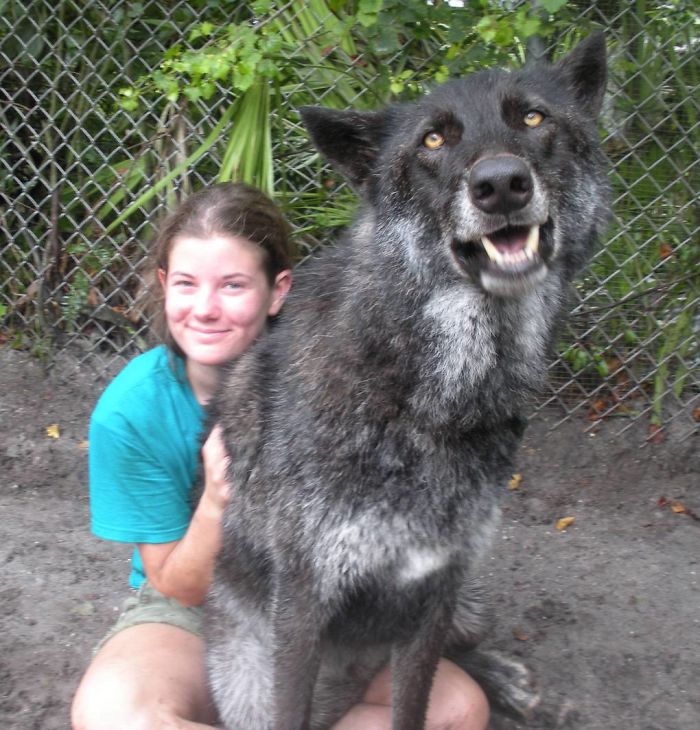 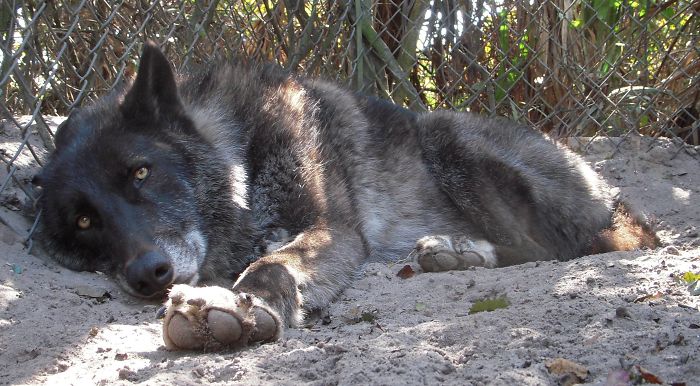 “Yuki is one of those animals that he lets you know if he wants you in his enclosure or not. He has a very small group of women that he allows in his enclosure called his ‘harem’,” – says Judy, a volunteer at Shy Wolf Sanctuary. 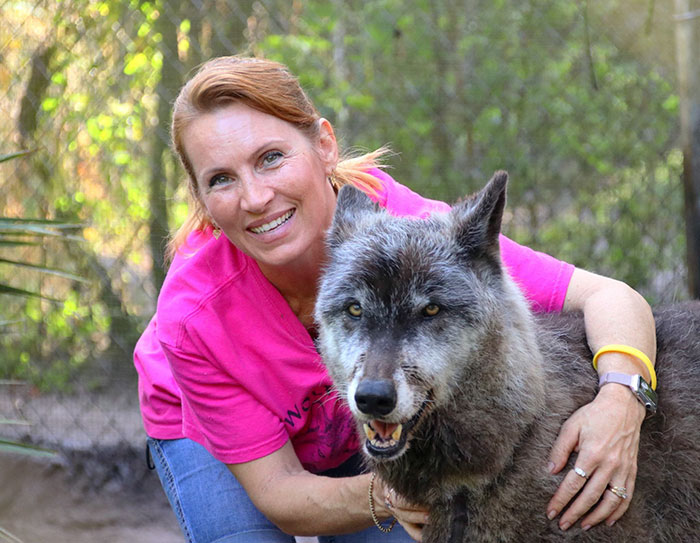 Shy Wolf Sanctuary, Education and Experience Center is a unique facility providing santuary to unwanted and neglected exotic animals. Since these animals can not be released into the wild the majority of them make our sanctuary their “forever home”. Our focus is not only to care for the animals but to educate and offer the community an understanding and appreciation for animals and how they have come to be rescued. We fill a void between domestic animal rescue, wildlife rehabilitators and zoos by catering to captive-bred and unreleasable exotic animals. Volunteers are encouraged to interact with the resident animals while learning about them.

The mission of this non-profit is to “reconnect people and animals through education”, so staff and over 30 active volunteers work year-round to not only help the neglected animals but to educate the public about the importance of protecting these animals. Wolfdogs are considered unadoptable by domestic animal services, so Shy Wolf Sanctuary is literally their last hope to get help and find a forever home. 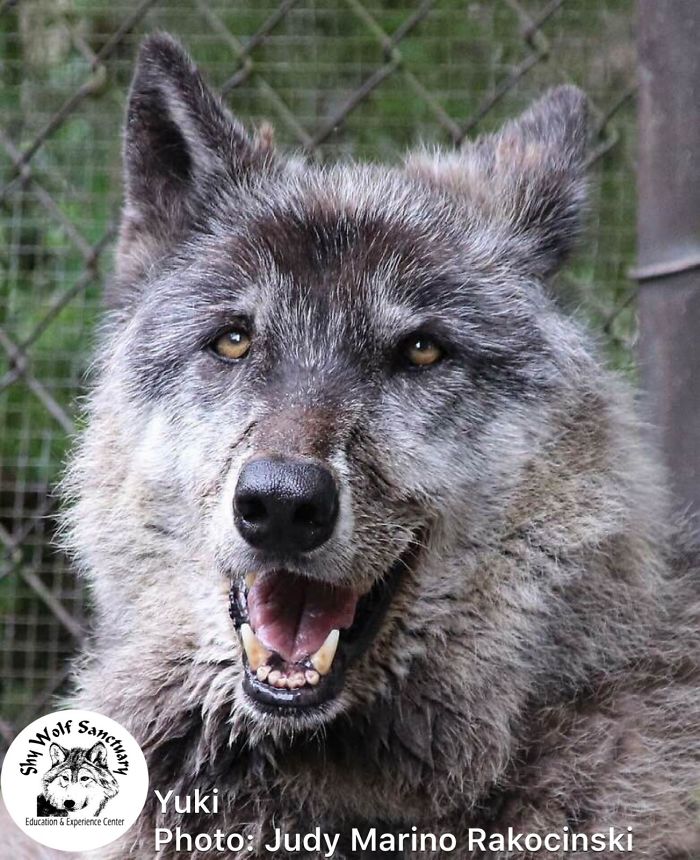 “They definitely are creatures that demand respect. It would be a much different encounter in the wild than what I do with these guys. The animals I work with have never been in the wild and never will be, so they are more socialized. We show off their adorable moments in the hope of helping people identify with them at least and maybe change their fear response into a healthy respect through education. And also giving an animal a chance at a decent life when otherwise they would be euthanized.” – said Brittany. 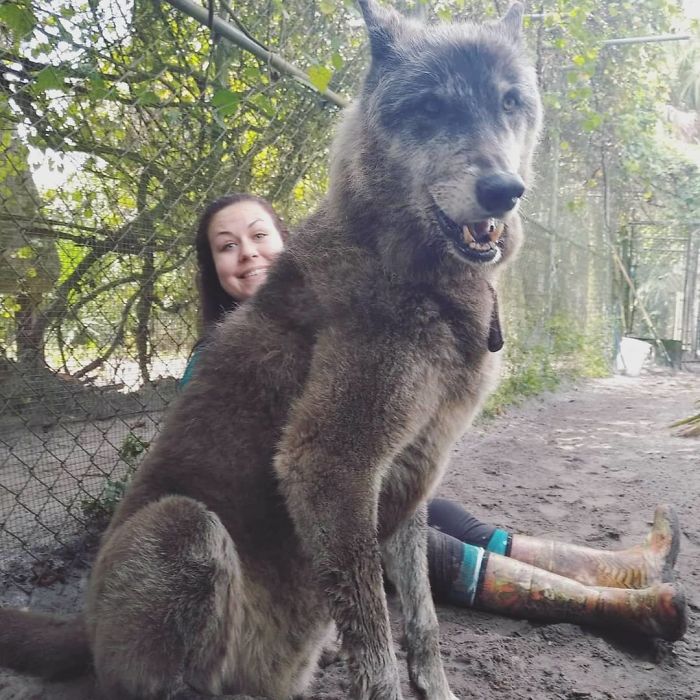 When wild wolves and domestic dogs are bred the result is often an unpredictable and mentally conflicted wolf dog. Dogs are gregarious, aggressive, and obedient to please man. Wolves are shy, highly intelligent, have an inbred fear of man and are psychologically and sociologically very different from dogs. 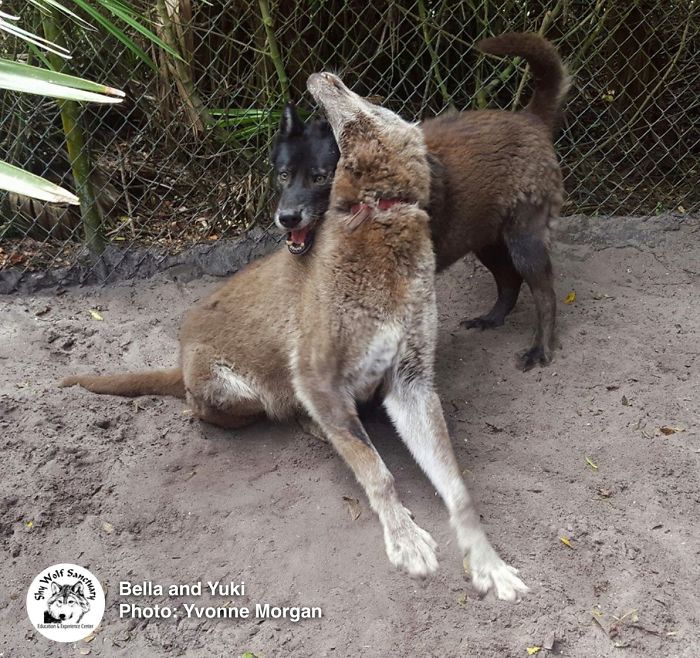 “Wolfdogs are a bit more difficult in my opinion because you don’t exactly know how much wolf behavior vs. dog behavior they will have. Yuki isn’t necessarily more social vs. the pure wolves. We have pure wolves who will run away when they see new people because they are generally shy, curious animals. Yuki, however will run straight to a new person and if he doesn’t like them will become aggressive towards them. With the pure wolves, once they know you and feel comfortable with you, they can be affectionate and loving but they will always be wolves you can’t get in the way of them and their food, and you must respect their boundaries. They are both social with people they accept in their space, but they are very selective as well. This also applies to other wolf/wolfdog companions. They are very selective but when they bond it is pretty unique.” 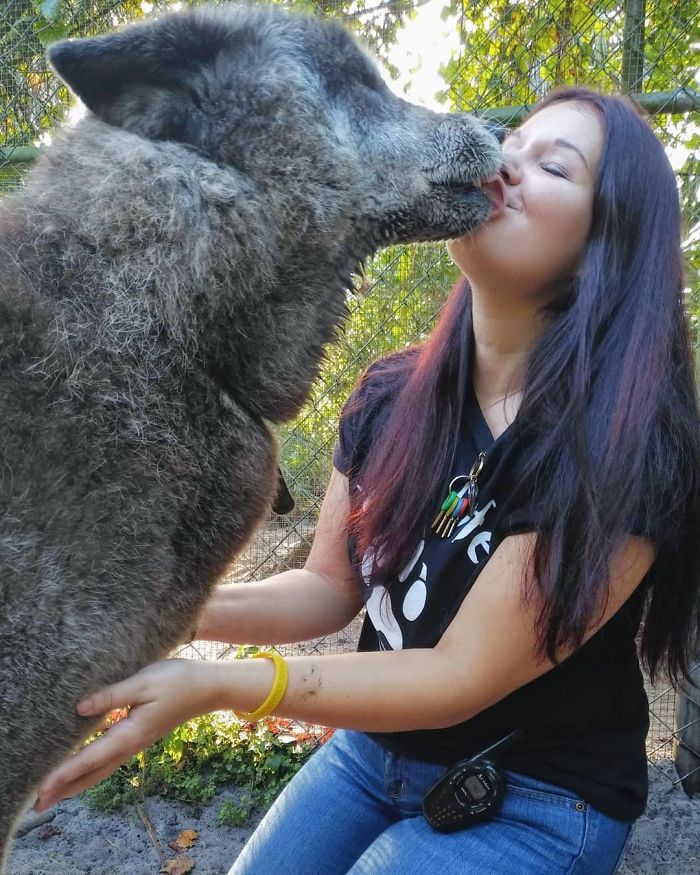 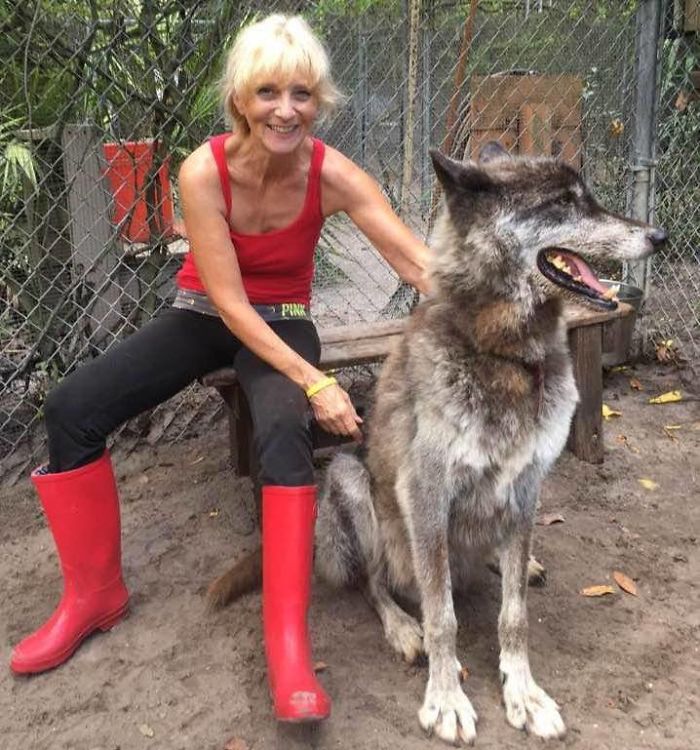 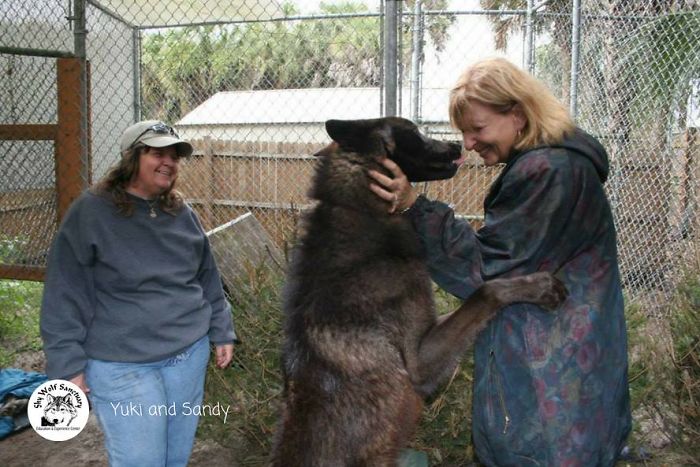 “Today, Yuki is one of the most interesting animals in the sanctuary. He is not an easy guy to get to know, but he does have a small number of volunteers he has bonded with. He has gained the nickname “Woowoo” because when he sees any of his chosen volunteers that is the noise he makes, beckoning that volunteer to come spend time with him,” – said Jeremy Albrecht. 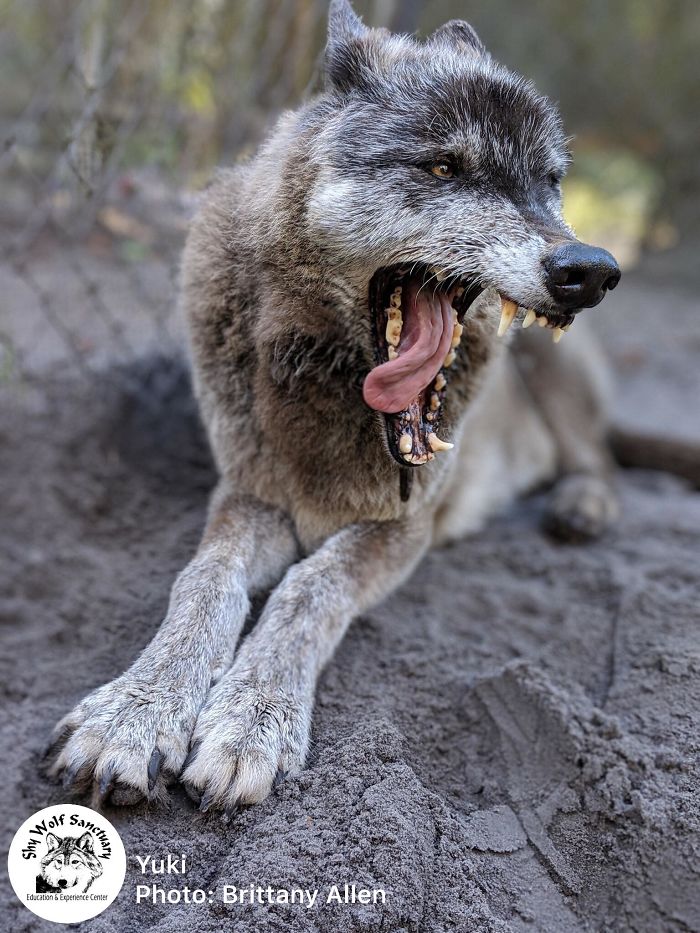 There was a breaking news at the sanctuary that the wolfdog has been diagnosed with blood cancer, though it’s difficult to judge just by looking at him. It’s very heart breaking!

“He was diagnosed with cancer last year and unfortunately it is terminal. We have dealt with this particular cancer before and ultimately you don’t really know how fast you caught it and how much time they have.  Yuki has been fighting it for quite a while now and is persevering so it is business as usual while we enjoy our time with Yuki.  When the day comes that he starts showing symptoms we will, as we always do, make the right decisions for Yuki’s quality of life,” – Jeremy Albrecht said. – “Saying goodbye to one of our animals is always difficult for our staff and volunteers, and Yuki will be no different.  But it’s important to remember that while many of these animals have rough beginnings, their stories always have happy endings once they get to Shy Wolf Sanctuary. When their time with us is over the last thing they do is make room for our next rescue and happy ending.” 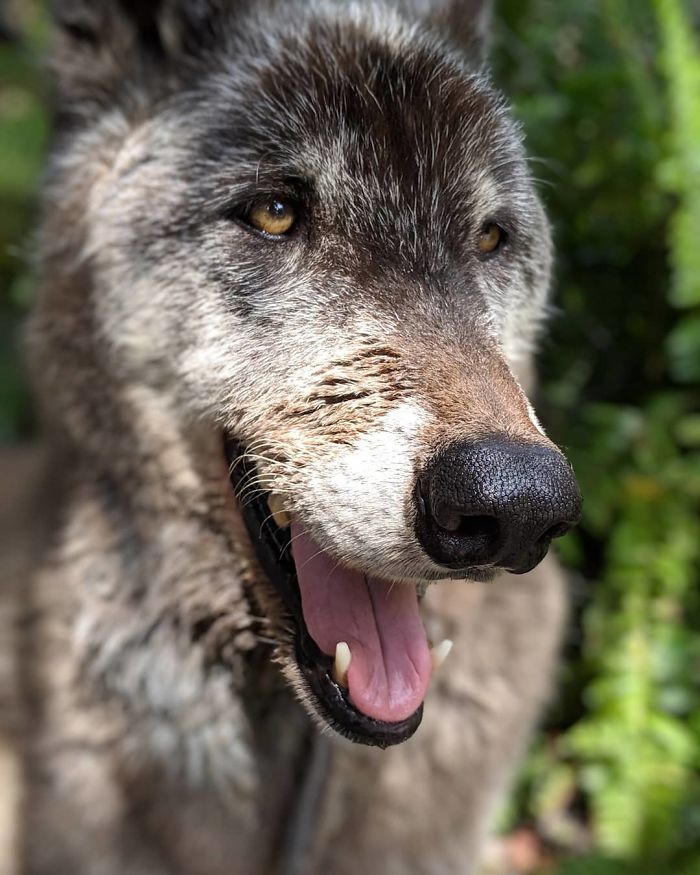 Life keeps challenging Yuki, but only hope is Shy Wolf Sanctuary where he can get lots of unconditional love, care and treatment.