Sabrina Hall is a TV news reporter for Fox 17 in Nashville, Tennessee. One day, Hall heard the repeated meows, she came forward to investigate. A kitten’s cry for help made a big impression on her.  She decided to help the little kitty. She put her live roadside traffic broadcast preparation on hold for a moment. Hall sought the source of the sound. She found a tiny, tawny-colored kitten in tall grass near Interstate Highway I-24, a risky place for every youngsters.

The abandoned and all alone kitten was covered with fleas and ticks, and not in a good condition. It was hidden near the highway that connects Chattanooga to Clarksville. The kitty was bit fearful. Hall waited patiently and slowly gained the cat’s trust, and as she gently reached out and carried it up, the cat did’t react fiercely. She felt that the little kitten was relaxed in her arms. Hall and her photographer Daniel Sullivan administered on-the-spot care, with Sullivan successfully removed a tick from the cat’s eye. She was now safe and sound in her arms. 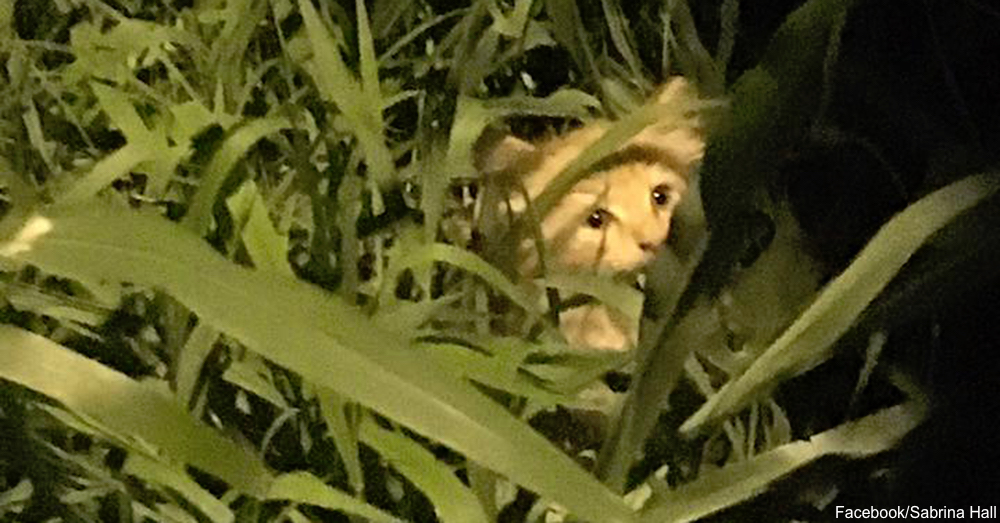 When Hall had completed her task, she took the rescue kitten home with her. The kitten was given more love in the form of a warm bath and a good healthy meal. Hall has a dog, but rather than being jealous, her dog welcomed it and made their little visitor his new best friend. He showed his affection with wet licks, kisses and cuddling. The kind hearted and caring rescuer, Hall then took the kitten to the vet for a proper checkup and shots, and he was christened Jeff after a complete examination it was revealed that he was a male. Sabrina Hall’s efforts paid off, and Jeff’s roadside rescue story has a happy ending. He was adopted and now has a forever home in which to live a comfortable life. We are happy for this little soul who is now safe in the hands of a gentle woman who would now take good care of him.