We are sharing a sad story of two friends. Gracie, a friendly dog has passed away. His best friend Baby Grey doesn’t forget him and visits his house daily.  Baby Grey uses to wander into the yard and stands at the sliding door, in the hope of meeting  her friend. She stands by the window glass and waits for him to come and play with her. She waits there, sometimes for 20 minutes, sometimes longer. This is the heart breaking moment when Gracie could not be there to accompany her. 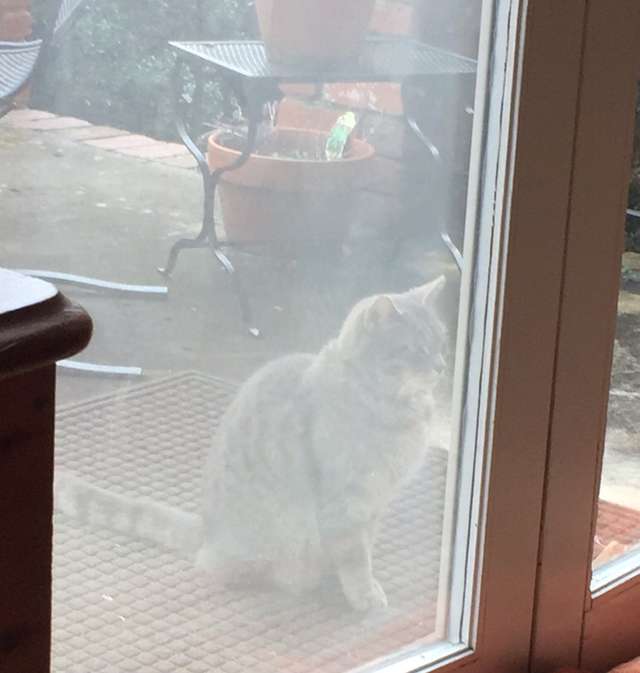 Gracie’s owner, Shea Belew Brennaman noticed that the cat has been visiting her yard for two and a half years ago. When Baby Grey first climbed into Brennaman’s backyard, she was greeted by Gracie, a guard dog who is very friendly. “Gracie was an American Eskimo and stayed outside almost all the time,” Brennaman said. “She loved nature and, while she was a protector of our house, she loved all other animals and they loved her.” 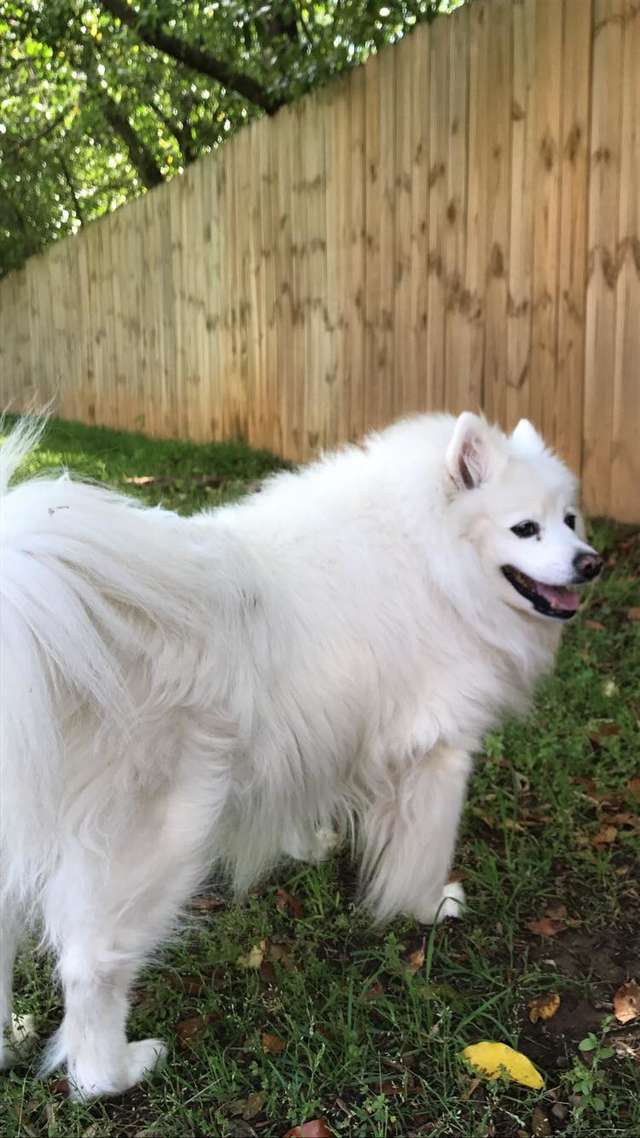 Gracie was friends with everyone around. She even befriended the chipmunks and rabbits, the hawks. She was always eager to know about the new comer in the house. Same thing happened when Gracie saw Baby Grey for the first time.  “Gracie accepted her into our yard immediately and the two became fast friends,” Brennaman said. 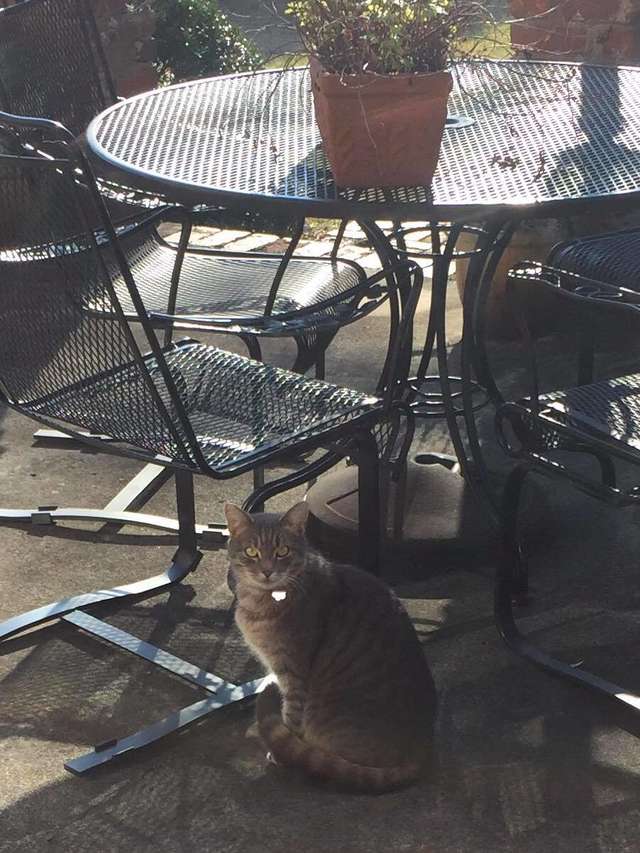 As time passed, Baby Grey’ visited her friend frequently. Gracie welcomed her as a generous host  and it seemed the two animals are bound in a relationship of kindness and love. “We would leave Gracie tomatoes on our porch, as they were her favorite treat, and she would share them with the cat,” Brennaman said, “which was a huge deal because Gracie was very particular about sharing food.” “When Baby Grey started coming over frequently the two of them shared tomatoes and sunbathed together,” she said. “Sunbathing was their absolute favorite activity.” 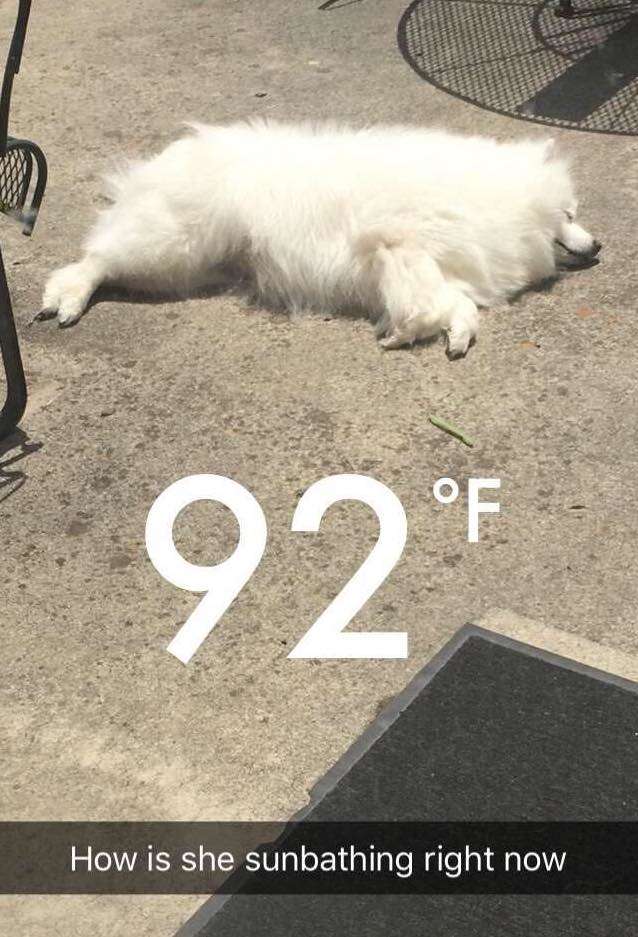 Gracie would do anything for her friends and family — including saving Brennaman from a water moccasin attack when she was just an 8-month-old puppy. “She had a sweet personality,” Brennaman noted. “[She] was a friend to all and was very motherly, especially to our Yorkie.” 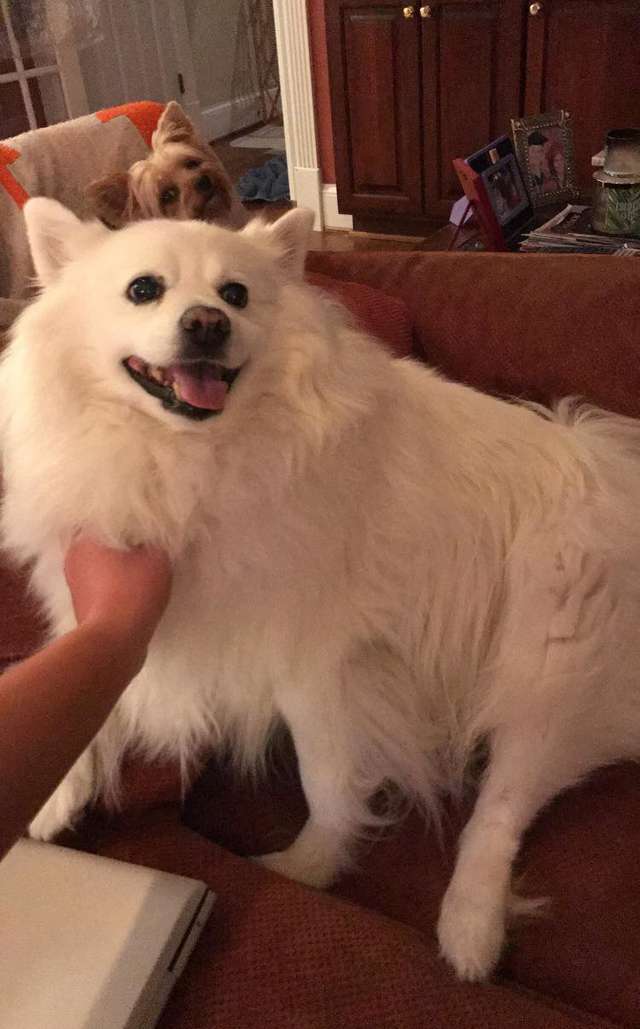 In late October 2017,  Brennaman noticed some changes in the pup. A visit to the vet and numerous tests and X-rays revealed the cause, Gracie had aggressive lymphoma. “Gracie spent most of her remaining days on the cold porch,” Brennaman said. “I think part of it gave her relief but, in reality, she was saying goodbye to her territory and to all of her friends in her yard.” It was a crucial time for every one. 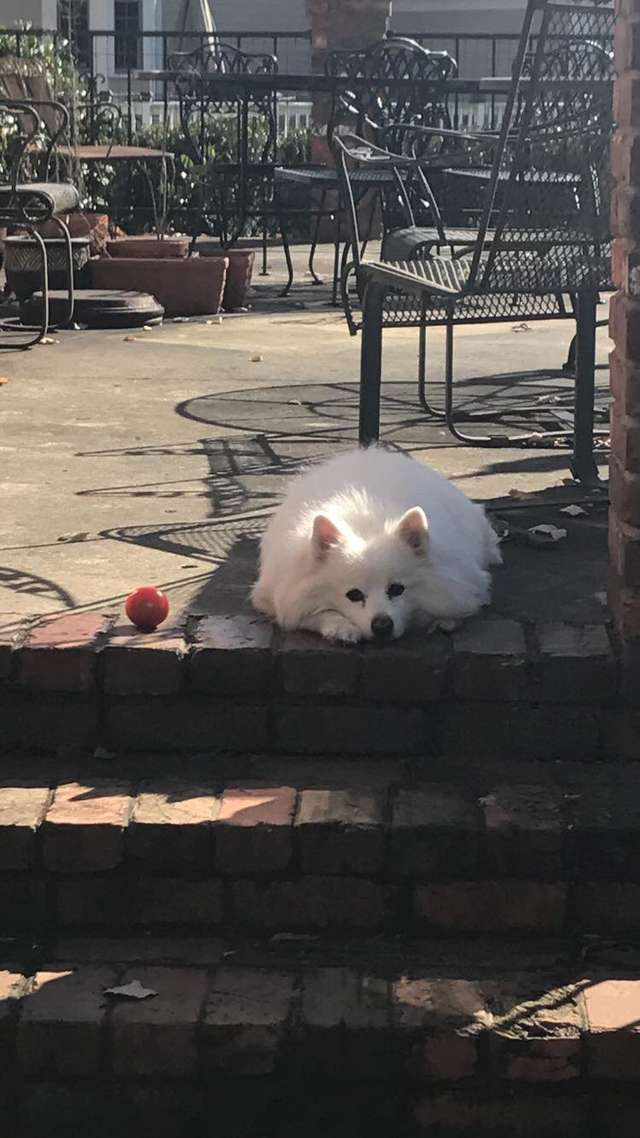 And, sure enough, Baby Grey was there. 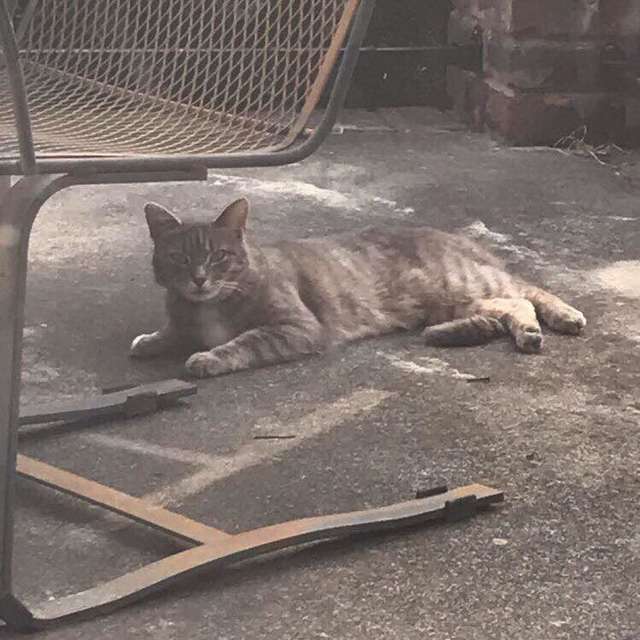 “Baby Grey came to see her several times in her last days and, while there was no tomato eating, the two just laid there to be with each other,” she added. “They had that kind of connection where nothing needed to be said or done. They just wanted to be with each other.” Gracie passed away in November 2017, less than a month after being diagnosed with cancer. The little dog’s death has made every one sad. Baby Grey showed her sorrow by holding a special kind of vigil for her lost friend. 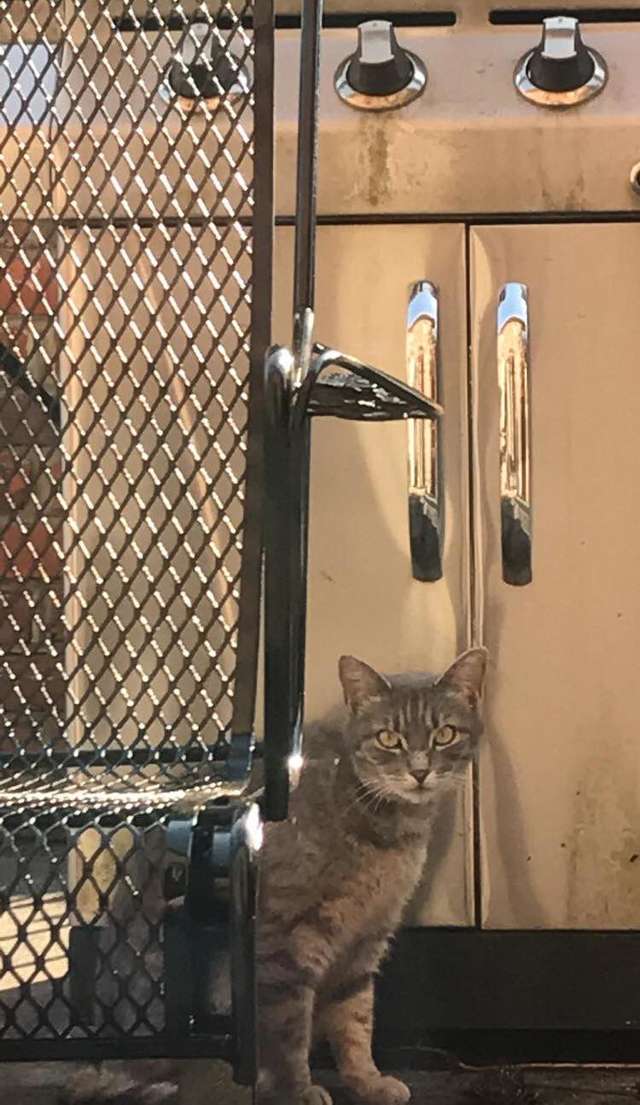 She doesn’t accept that the little dog is really gone. “Since Gracie’s death, several times a week, Baby Grey will come to our porch,” Brennaman said. “She will first come right up to the door and look in for Gracie. I don’t know how long she waits, sometimes she’ll wait for 20 minutes and then she will walk away to the porch where she will sit a while before she eventually lays down and sunbathes.” 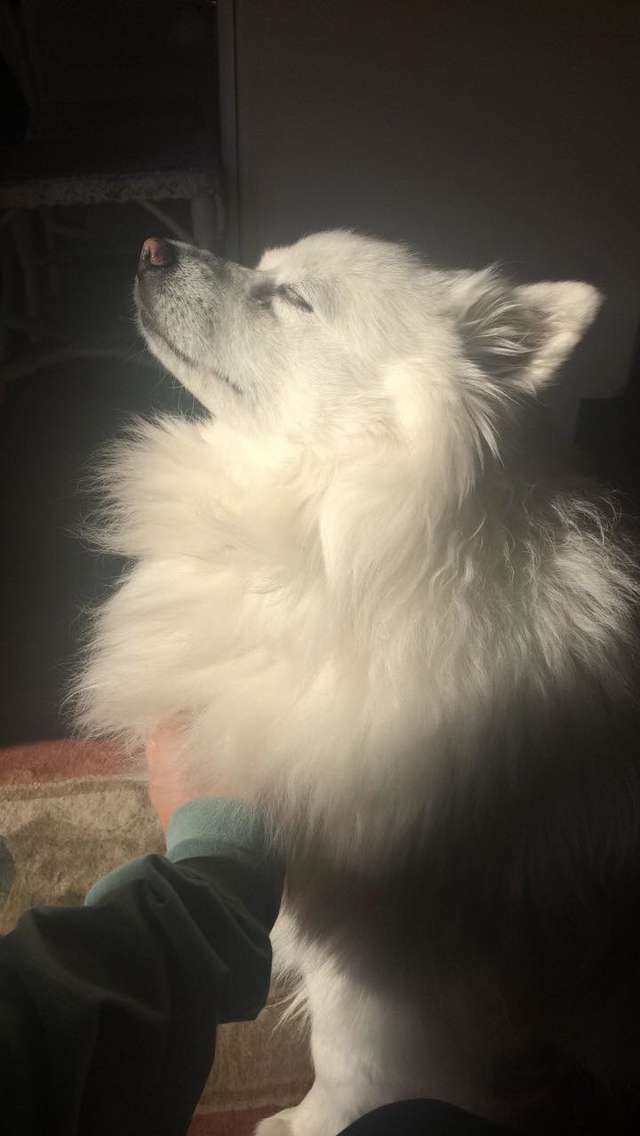 Brennaman notices Baby Grey’s continuous visits, and she doesn’t like to see the little soul suffering from a loss of a dear friend. “It breaks my heart to see Baby Grey still looking for Gracie,” Brennaman added, “but at the same time it gives me so much hope that these two animals had such a strong bond.” This is really an inspiration for us to see such a kind behavior of these two animals.