We are showing you a unique collection of creative work which can heal the souls of dejected people. An adorable Japanese artist, known by his pseudonym Ariduka55 creates, introduced the realistic creations of unbelievable scenario which are almost spell bounding. This Japanese artist is an alone person, avoids going outside and talking to people. He doesn’t reveal his identity in any of his works on websites. This mystery adds to the allure of his creations. Although the scenes depicted in his illustrations are from the ordinary world, but the little animals that include pets, such as cats and dogs, and wild animals, like raccoons, rabbits, owls, etc. are created of enormous proportions. Despite their huge sizes, the animals are not scary at all, they are presented as soft, cuddly and peaceful creatures who have power to change the surrounding atmosphere.

Though he is not much popular, all his works is compiled in a book titled ‘Magalophilia’. Going through this book, you will be introduced to his enticing world and the incredible atmosphere he creates in all his illustrations. The beauty lies in this mesmerized world with setting of landscapes, countryside, cities, and even famous historical monuments. This adds more charm to his wonder world.

The large size of the animals depicted in his illustrations is shown with gentle characteristics that are commonly found in pets when they are in a playful mood. All these animals are also filled with all kinds of emotions to stimulate the imagination of viewers and prompt them to interpret what they see in their own different ways. They are attracting lots of attention on social media.

His creation suggests that art can be be used in positive way to comfort people in difficult times. So, each illustration was created to provide good energy for people who are weary, working hard, or having a tough time in their life. This series of gigantic animals consoles humans who have bad day, warming their hearts and gains admiration on the internet. Scroll down to enjoy a peaceful and happy life in these soothing creations.

#1. A girl comes back home and uses a HUG card on her cat.

#2. A perfect world where you can surrender yourself to sleep on a giant ball of fur. 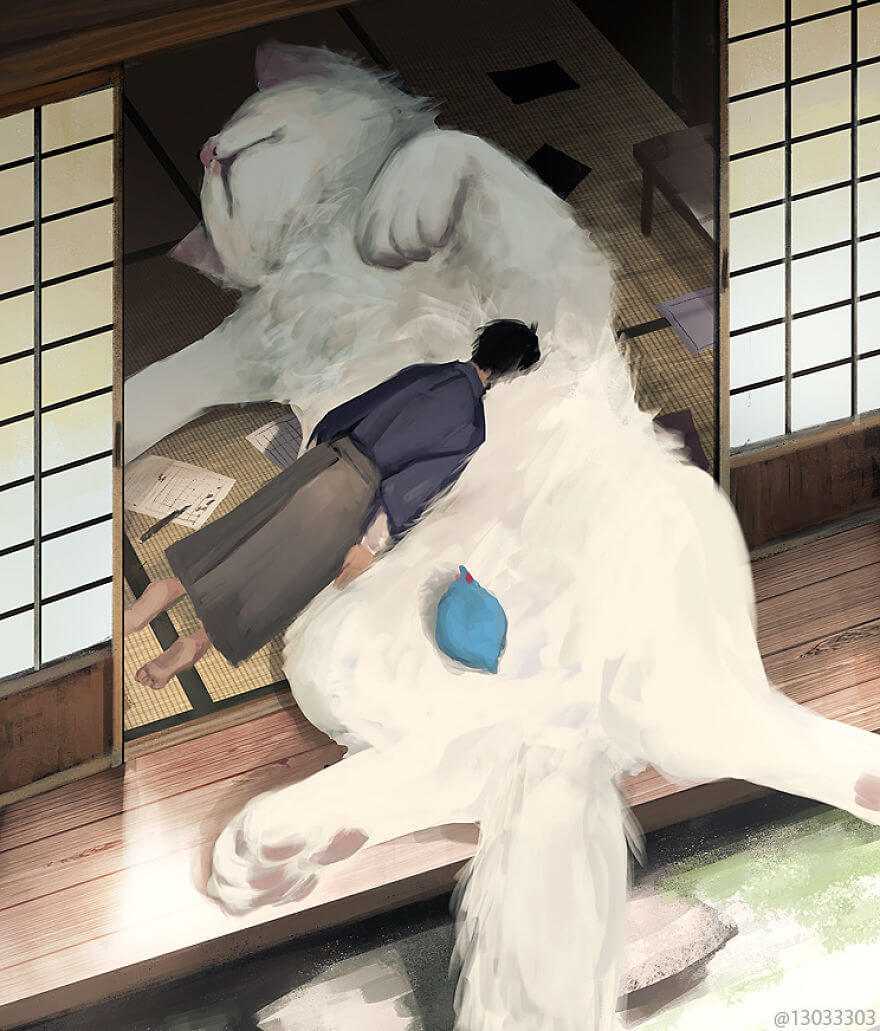 #3. A tranquil and slightly gloomy part of the series featuring a Korean crow-tit (Baepsae). 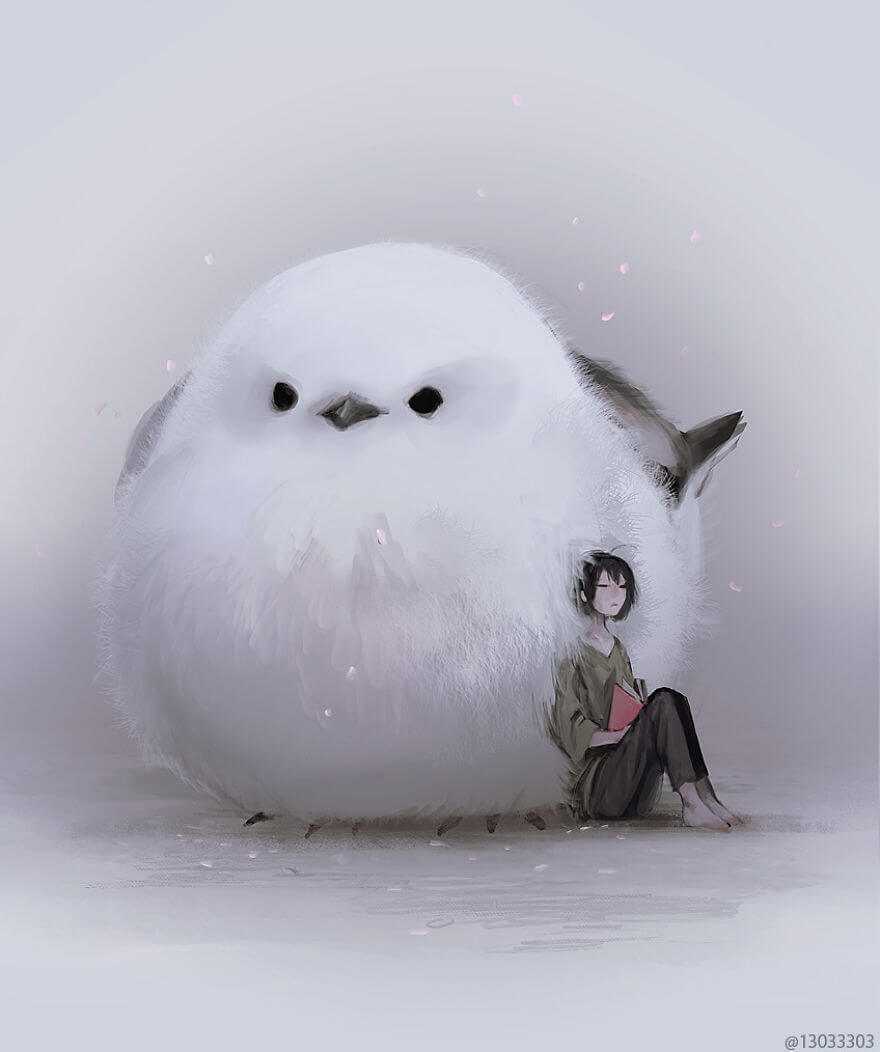 #4. A stray cat looking for a place to call home.

#5. The Ainu people believed that they were born from the union of a wolf like creature and a goddess. 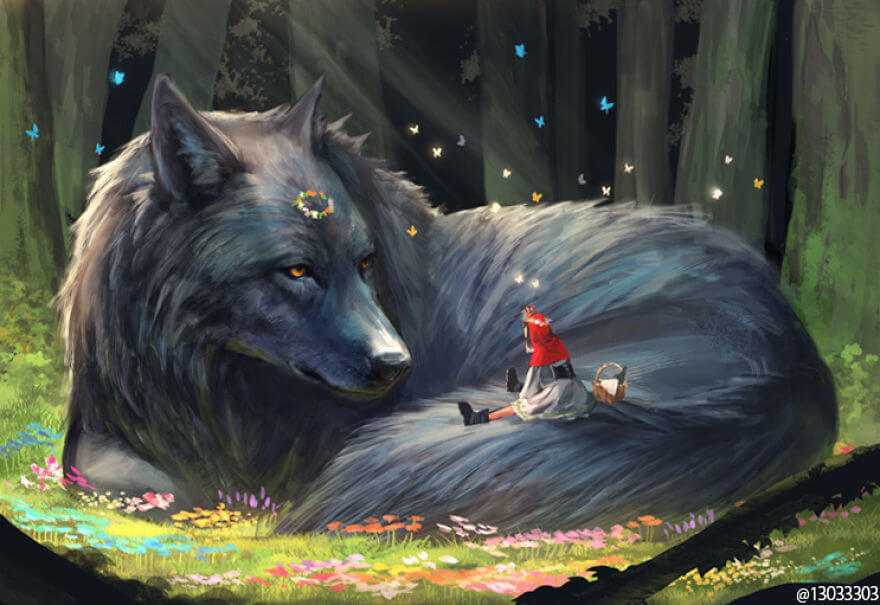 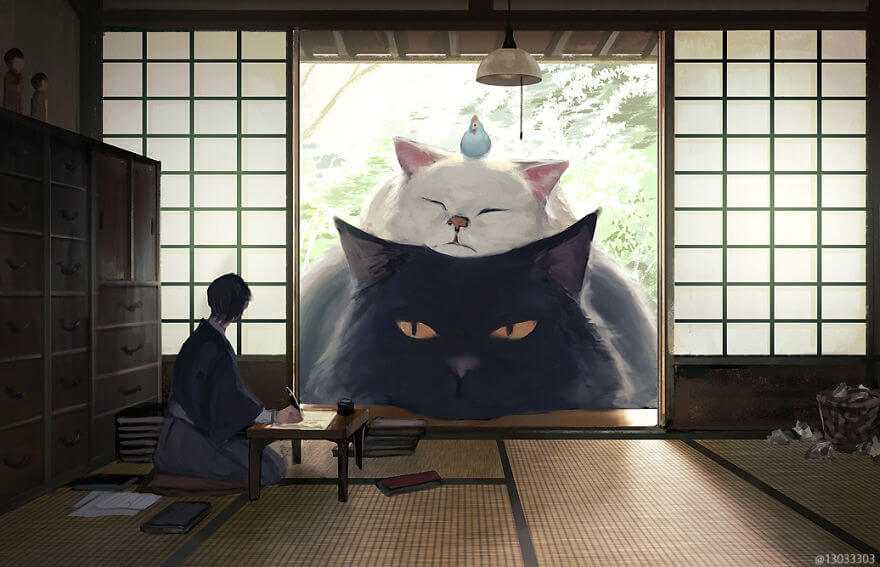 #7. The art of camouflage is on point in this picture. 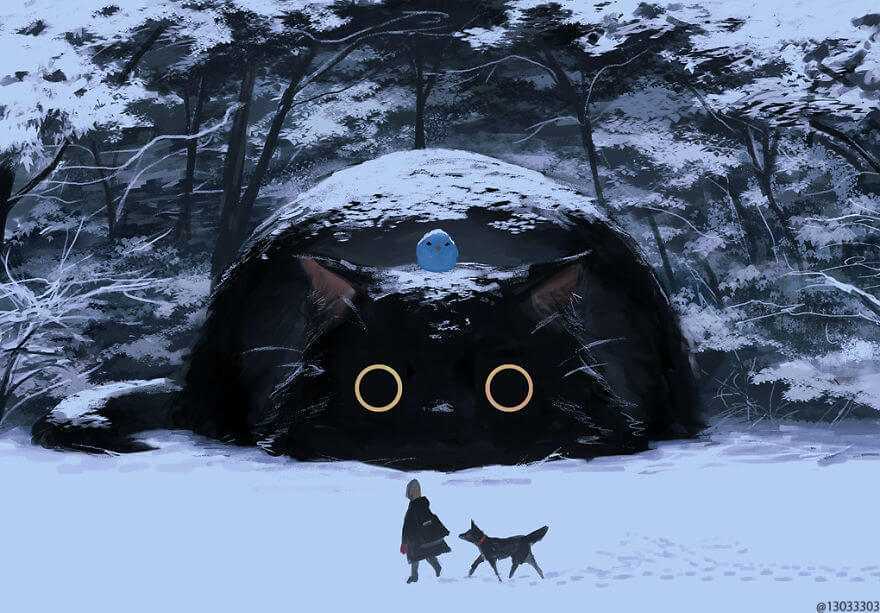 #8. A peaceful autumn afternoon at the shrine saturated. 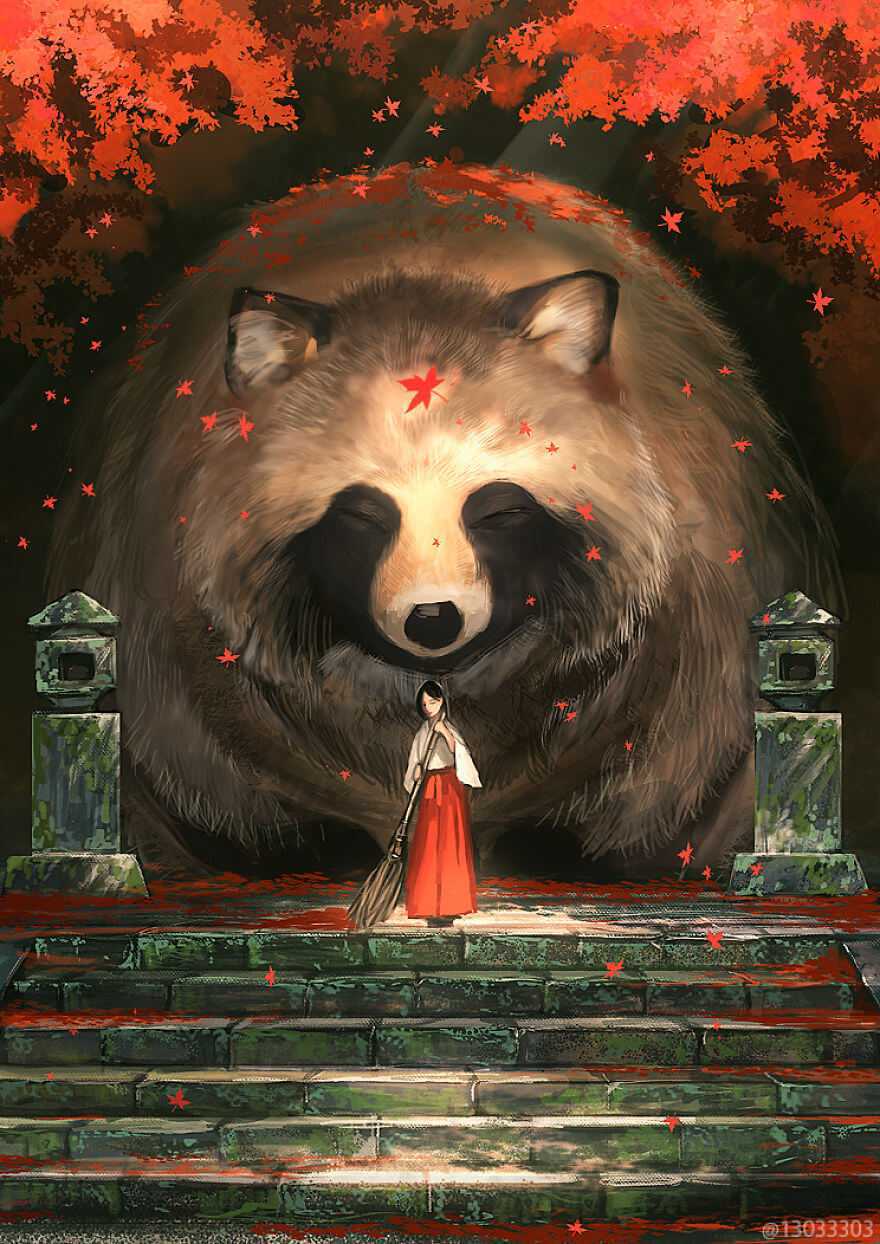 #9. Japanese culture sees a black cat crossing your path as a good omen. 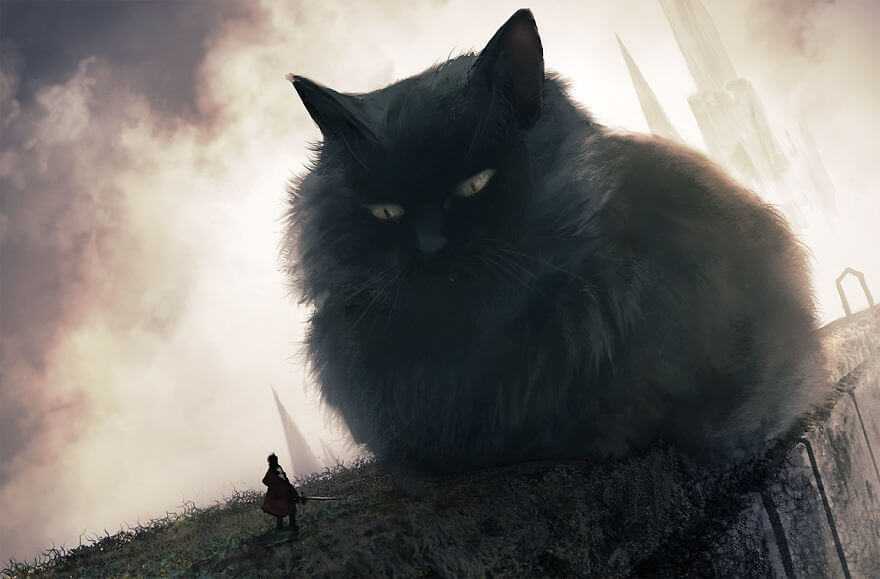 #10. This cat sports a pair of magnificent blue horns. 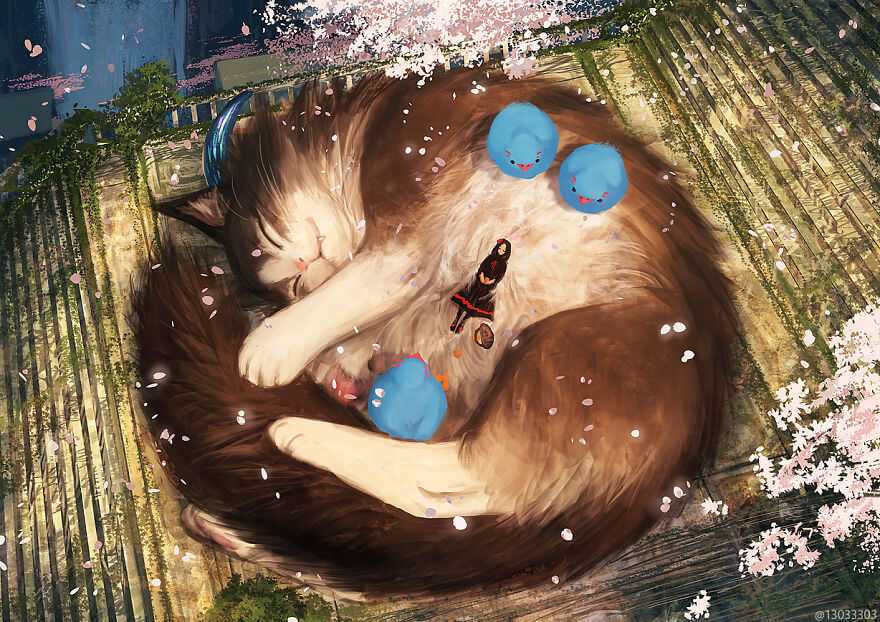