Cats with paws that have been painted purple are actually involved in the world of dog fighting. The coloring is used so that bettors can tell which cat is whose. The white parts of a kitten are colored with purple and then the cats are tossed into the ring.

As a cat rescue worker, Megan Sorbara considers herself pretty hardened to a lot of terrible things she’s helped severely emaciated cats, maimed cats and victims of animal abuse. So she never expected to feel as upset as she did when a cat with purple paws arrived at her shelter. These adorable felines aren’t just victims of fashion, they’ve also survived the trauma of being dangled as bait in a dog-fighting ring. 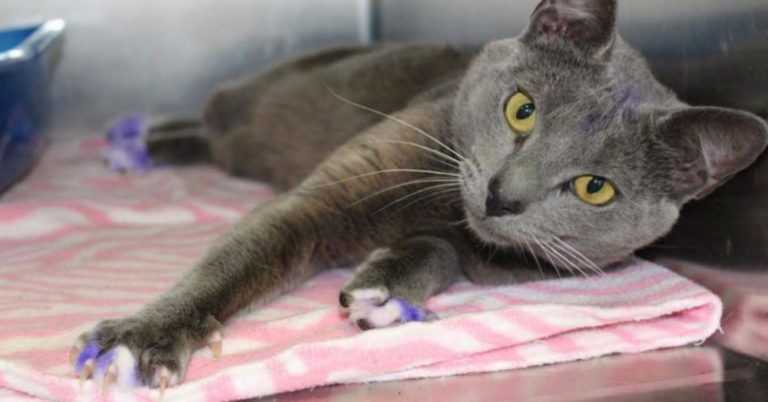 This week, animal control picked up a cat who’d been wandering around the streets. He wasn’t injured, and he generally was in good health. But his paws told a different story — they’d been colored purple with a permanent marker, which is what abusers do to animals who will be used as bait in dogfights.  This cat was being rescued by Clewiston Animal Control. After seeing his picture, Sorbara immediately fell for the cat who came to sport a colorful hue through no fault of his own.

“Being in animal rescue, you hear and read about a lot of terrible things being done to poor innocent animals,” she wrote on Facebook. “And then one day, the victim of one of these terrible things shows up at your door. I consider myself pretty hardened to a lot of stuff. I have dealt with a lot of injured, emaciated, neglected and abused animals but this one really got to me.”

Mr. Purple Paws looks like a healthy cat, he’s of a normal weight and boasts a nice, healthy coat. However, the poor animal’s purple paws tell the hard truth. 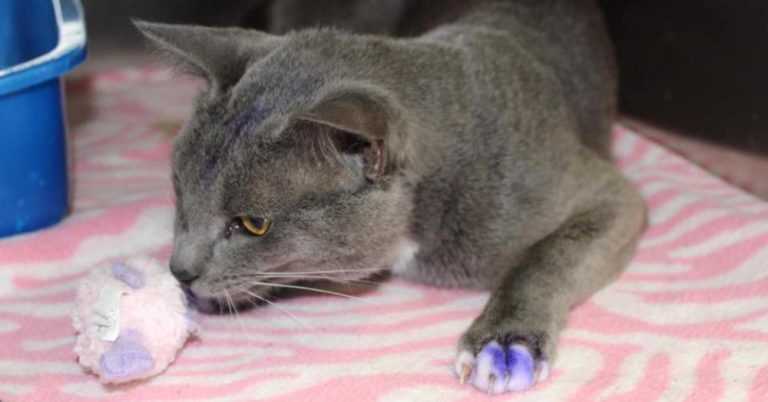 “Dog fighters use markers to color the white parts of cats and kittens so they can bet on which color will die first,” she continued. “They are ‘color-coded’ and then thrown to packs of dogs, while these sick barbarians place their bets. This is cruelty at its worst.”

Somehow, Mr. Purple Paws managed escaped before entering the ring, then picked up on the streets by animal control. That same evening, the group transferred the cat to Naples Cat Alliance, which put the animal up for adoption.

“I can only hope more were able to get away but my real hope is that the perpetrators of this heinous ‘sport’ be found and prosecuted.” Despite everything this animal is been through, Mr. Purple Paws is sweet, gentle, friendly, and surprisingly playful. “He let us pick him up and he is playing with toys,” Sorbara told I Heart Cats. “He is so sweet.” 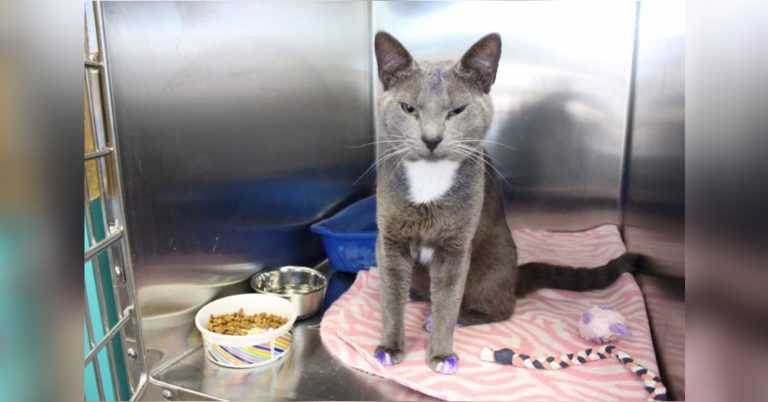 The paint has slightly faded from his paws after been bathed, but traces of his former life remain. A week after his arrival at Naples Cat Alliance, this sweet animal found his loving home. There are a lot of supporters on internet for this mistreatment with these innocent creatures.

“Anyone involved with any kind of animal fighting needs to be locked up for the rest of their lives,” one user wrote. “They enjoy the blood-sport of watching animals in pain and suffering and being absolutely terrified and struggling for their lives. How dare they hurt these poor innocent animals! This is sick, barbaric, and brutal.”