Cotton the cat was alone on the streets, starving, disease-ridden and close to death. His eyes were scabbed over with mange and he was being eaten alive by mites, finding any kind of food without the use of his eyes was next to impossible. But then his guardian angel arrived. Carmen Weinberg, founder of Animal Friends Project Inc., was heartbroken when she received him, and immediately took him under her care. 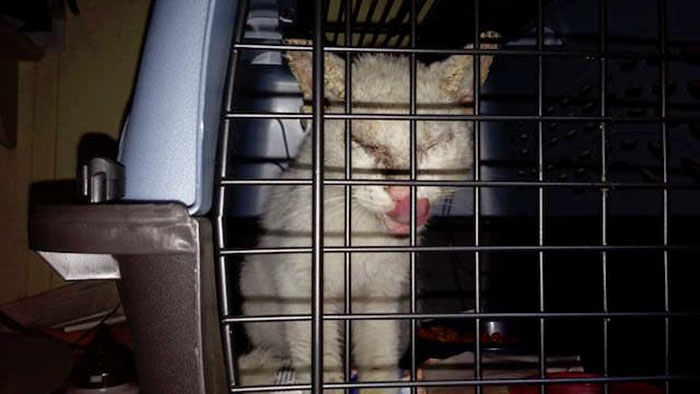 “He couldn’t even see or open his eyes because the mites were so bad,” Carmen told The Dodo. “It must have been so scary for him out there not being able to see. He was all alone and so skinny because he couldn’t find food.” 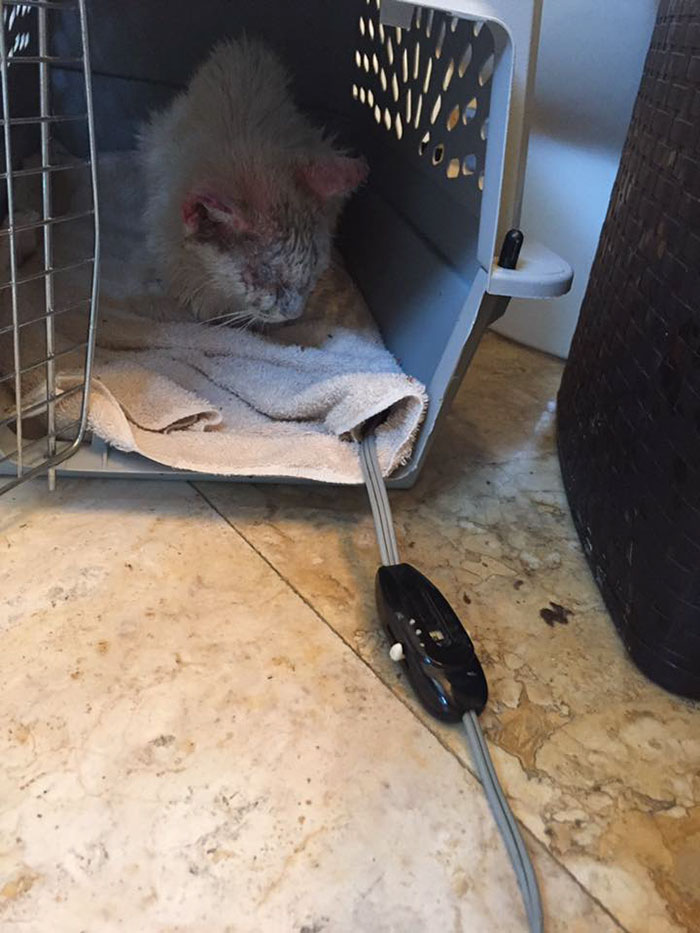 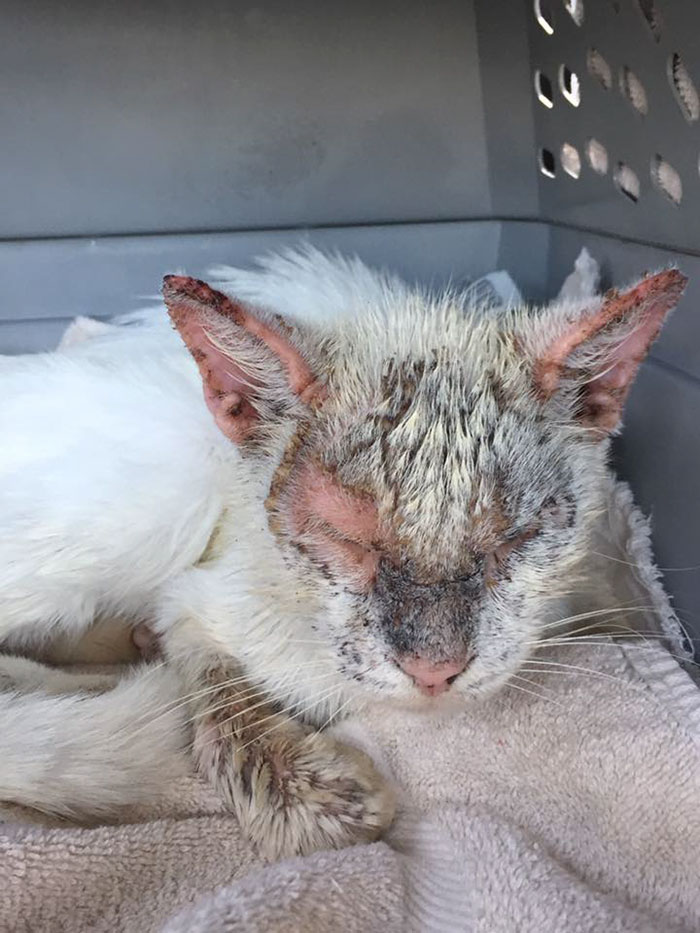 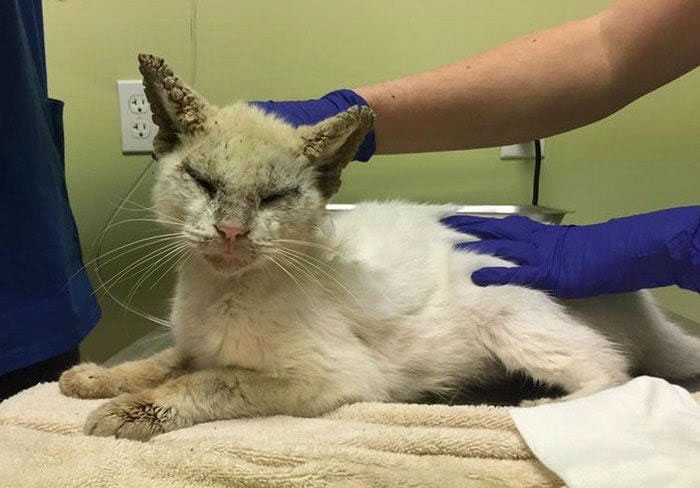 Having cleaned him up, Carmen helped Cotton get his strength back by feeding him hearty meals, while tending to his mange with creams, coconut oil, and various antibiotics. “We could just see his tense body start to relax as the days passed,” she said. “He was finally able to rest without scratching so much.” 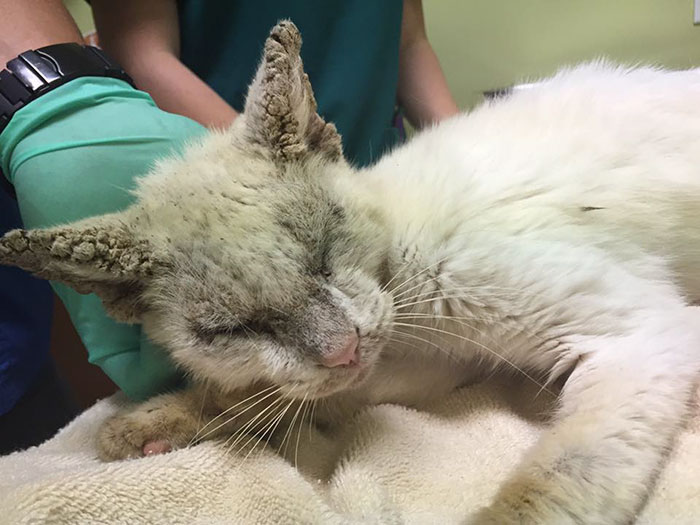 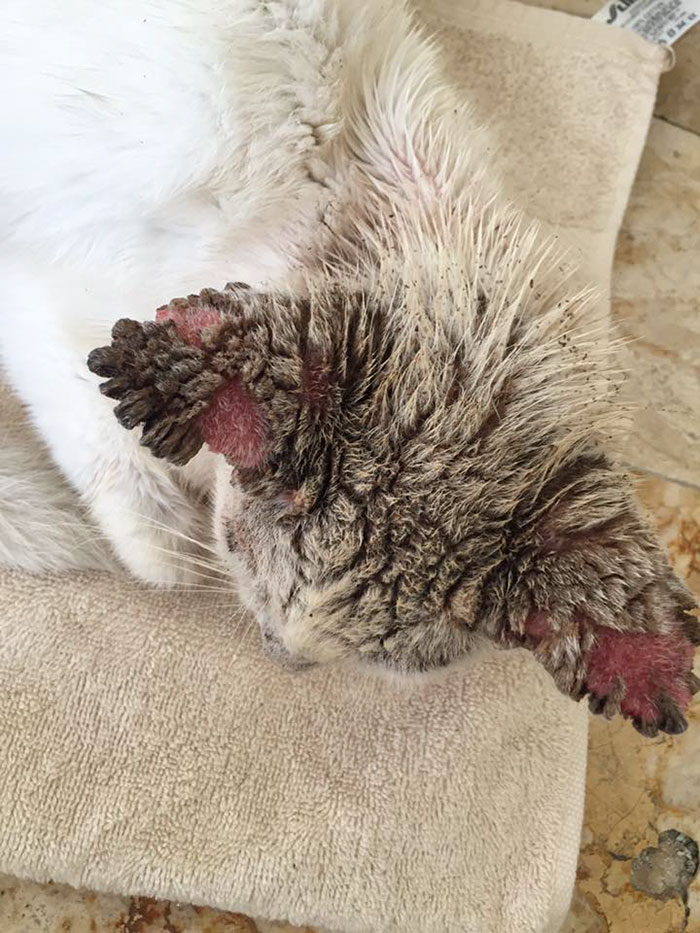 “Cats like Cotton depend on people to heal, because they cannot always ask for help … I’m sure so many people passed him by because of how sick he looked, but he was just waiting for someone to give him a chance.” 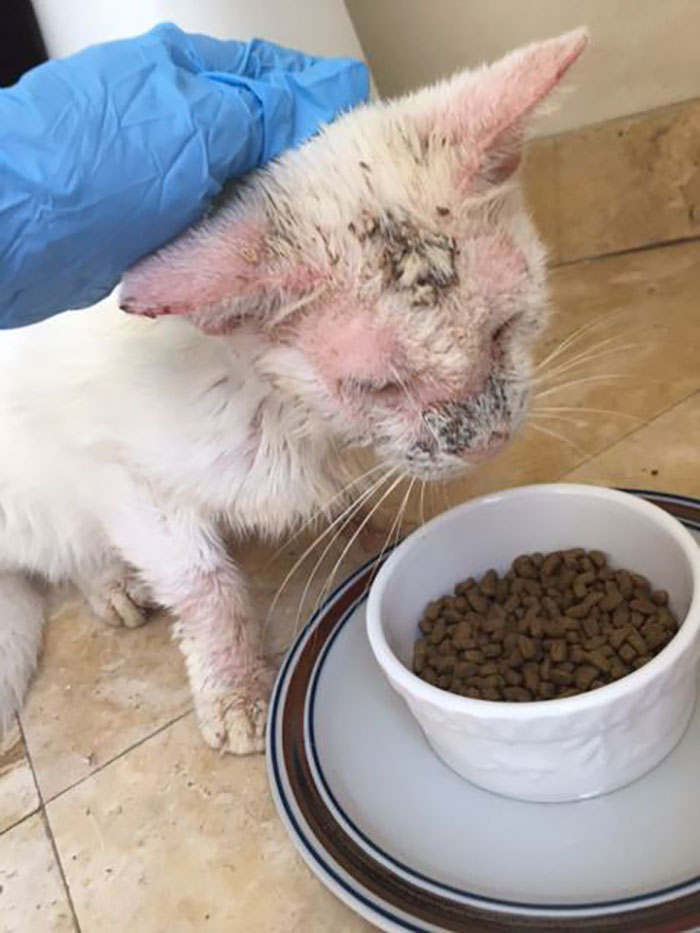 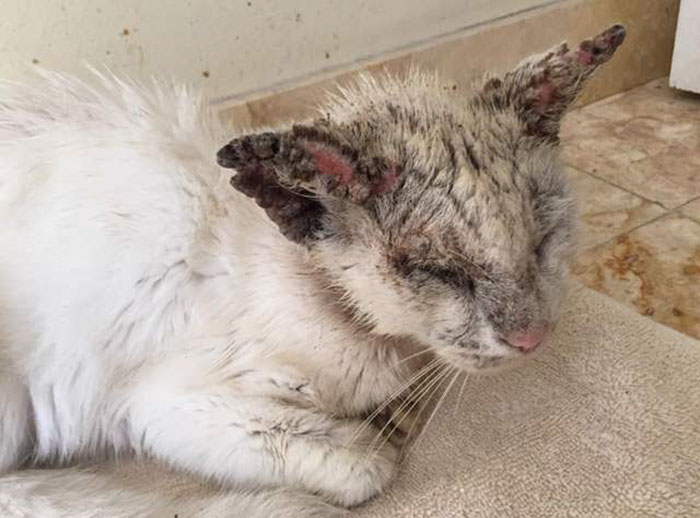 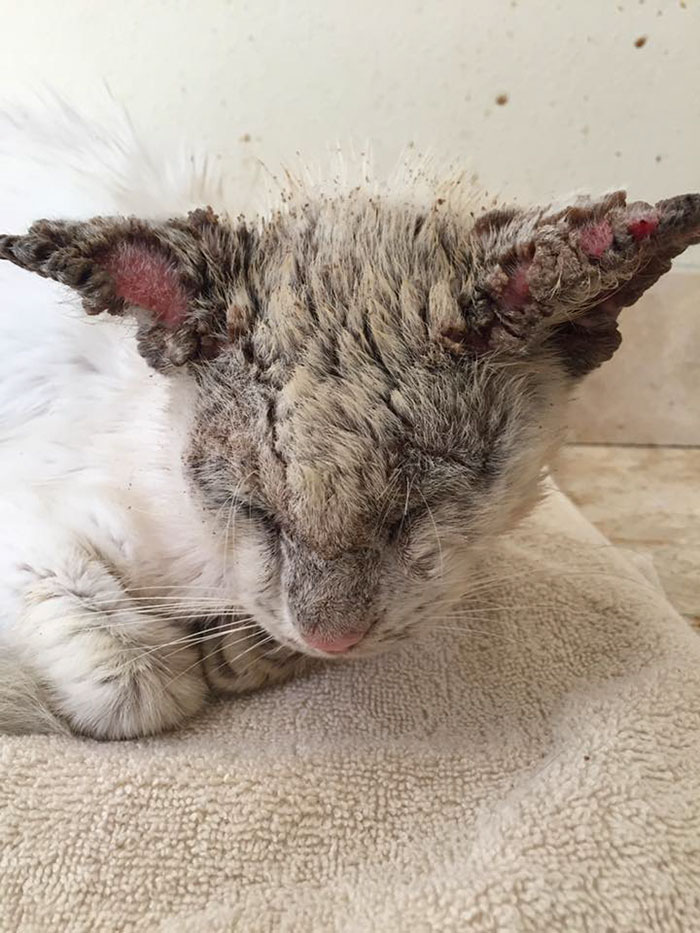 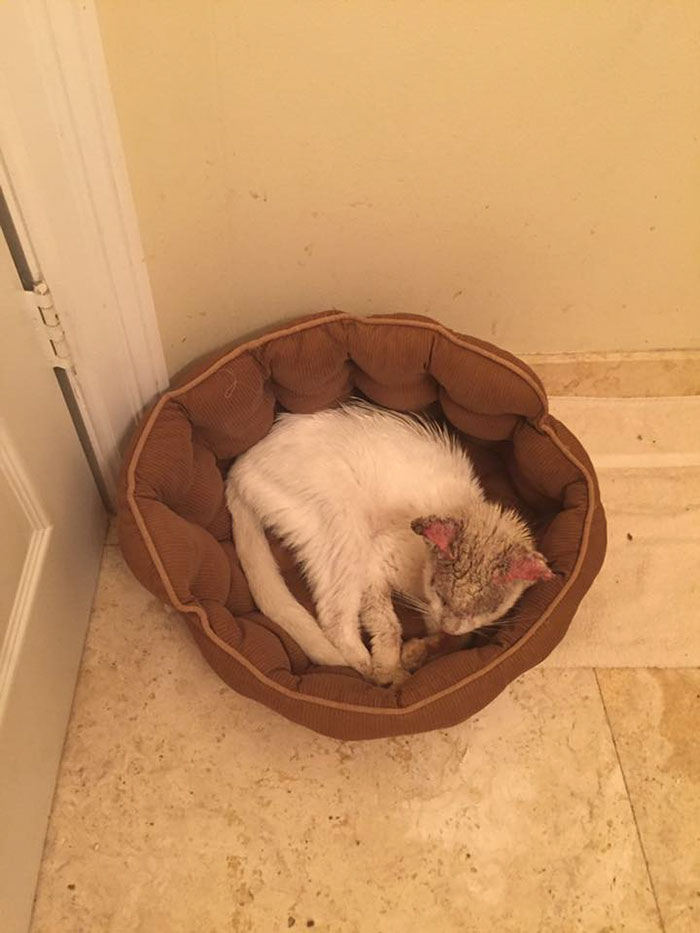 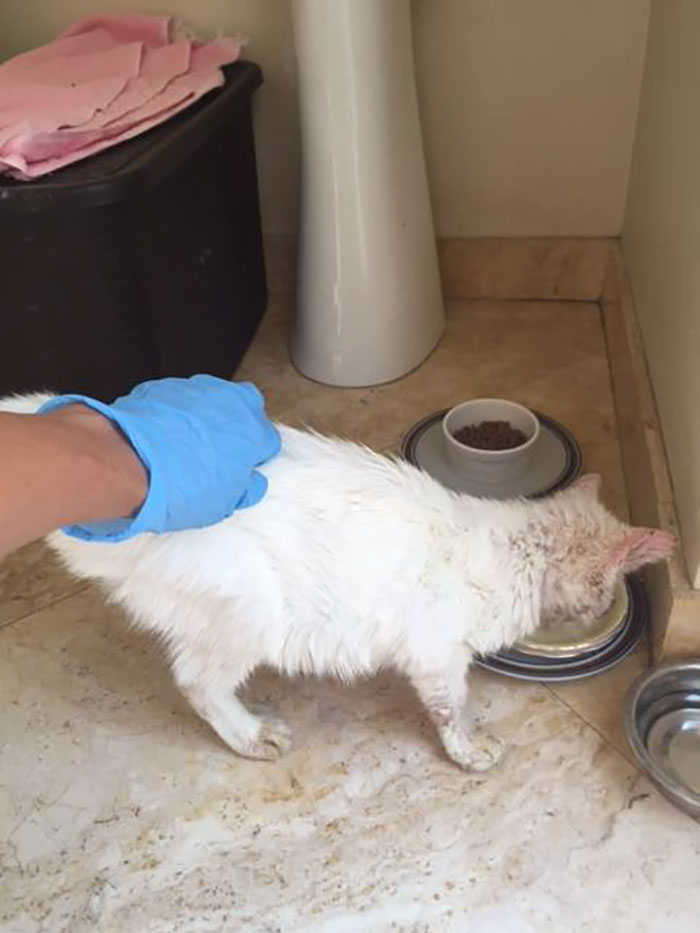 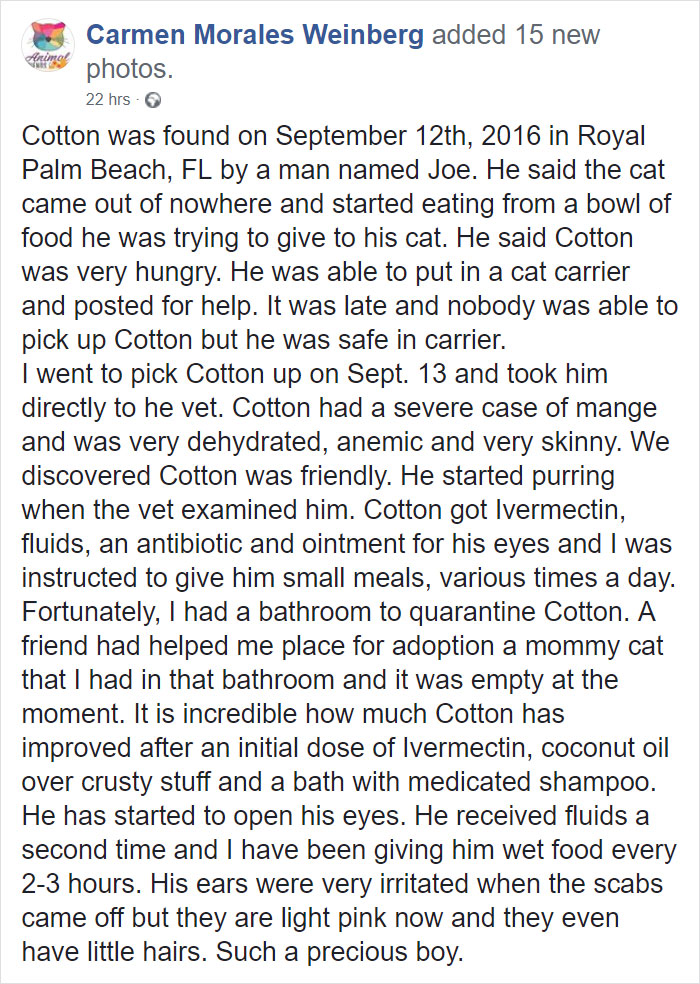 With lots of care, Cotton has finally opened his eyes 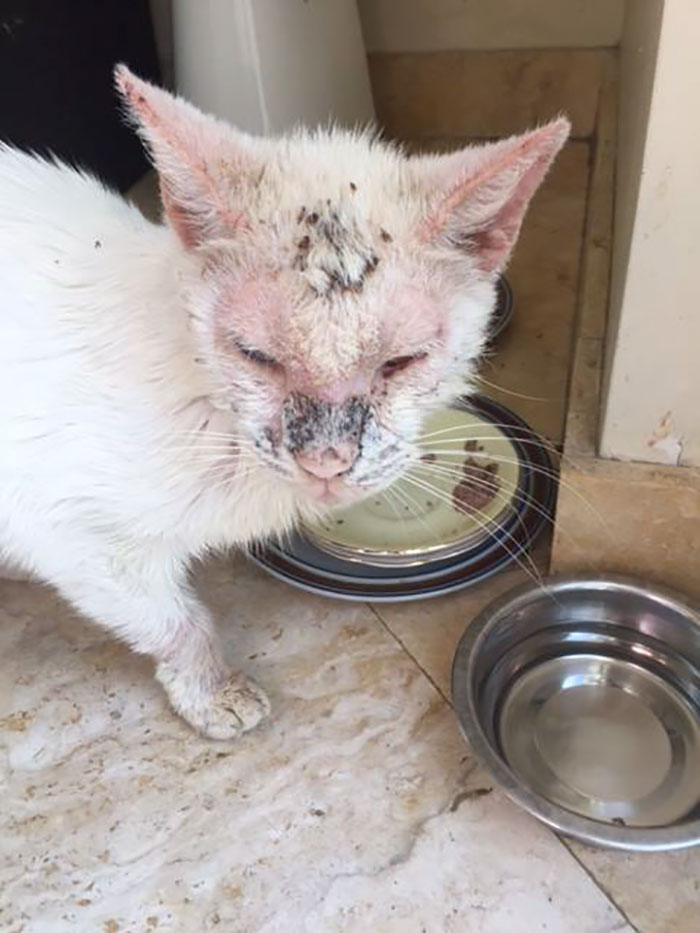 The bond between the pair grew strong as Cotton, still unable to see, began to sense that he was being given a second chance at life. The transformation was incredible as Carmen’s care and nourishment healed his myriad health issues, but the day that he was finally able to open his eyes again was a truly beautiful moment.  “We thought he was blind, and that he would be blind forever, “Carmen explained. “The vet thought that even when his eyes recovered they might be damaged, but they weren’t. It was such a wonderful surprise. His eyes were just beautiful.” 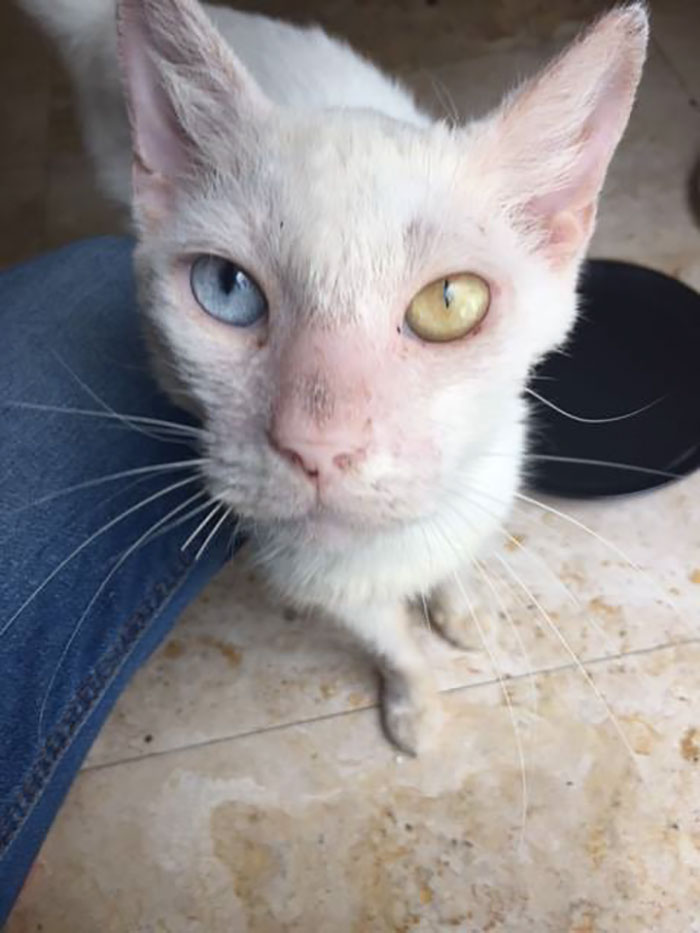 With one eye a vivid blue and the other one hazel, Cotton’s transformation from filthy bag-of-bones to a healthy and dashing tomcat was complete. Surprised as anyone to get his vision back, he took to life with Carmen so well that she was simply unable to give him up for adoption, not that he was short of suitors! “We got so many applications for him due to his looks, but in the end, I saw how attached to me he had become,” she said. “I didn’t have the heart to put him through another big change. He had already been through so much.” 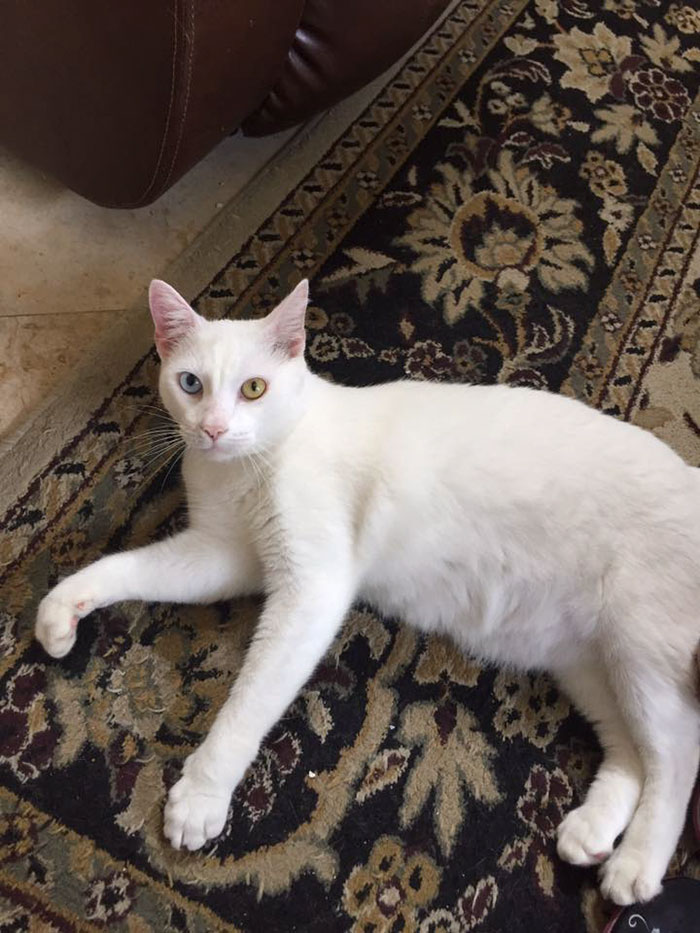 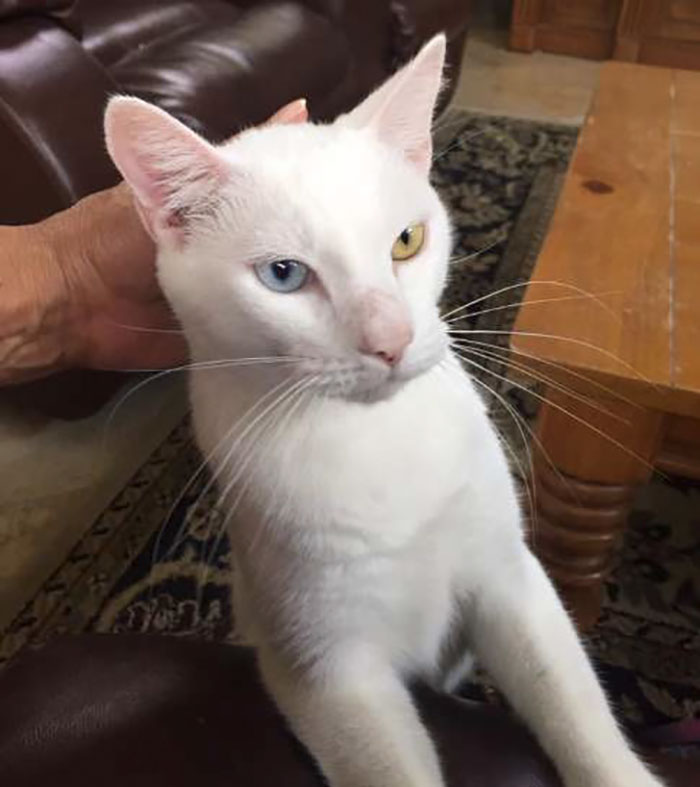 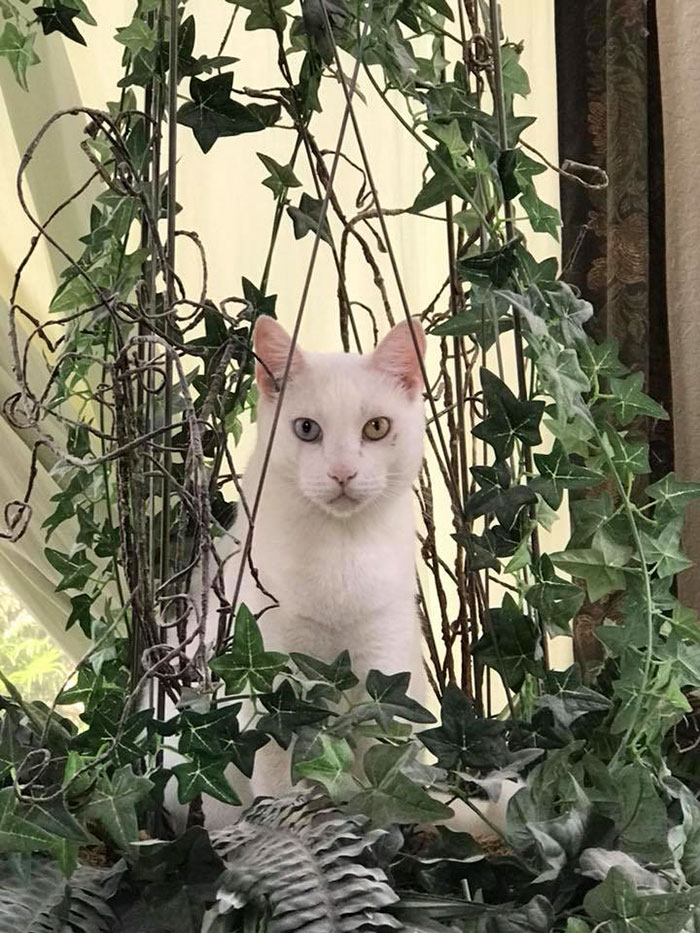 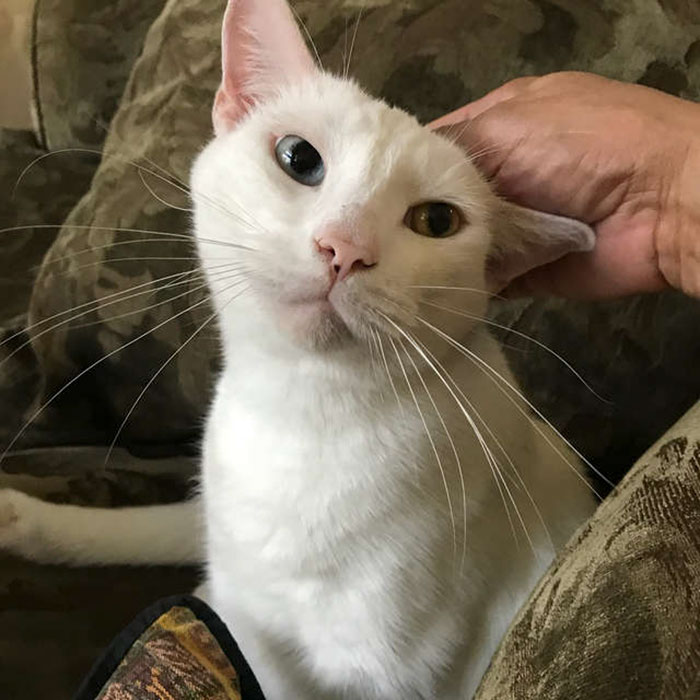 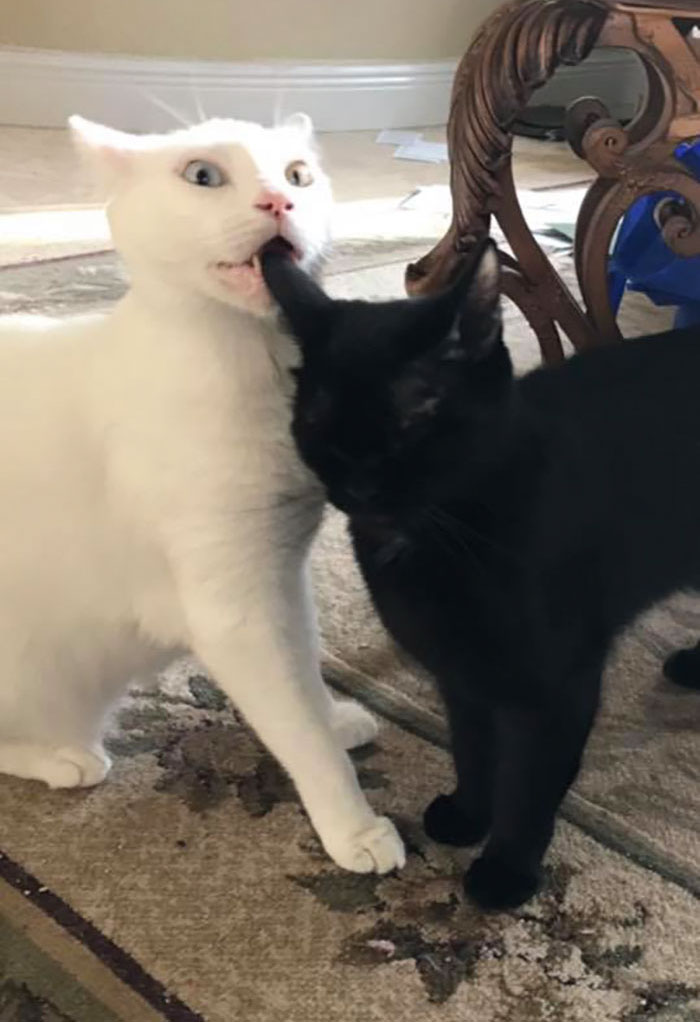 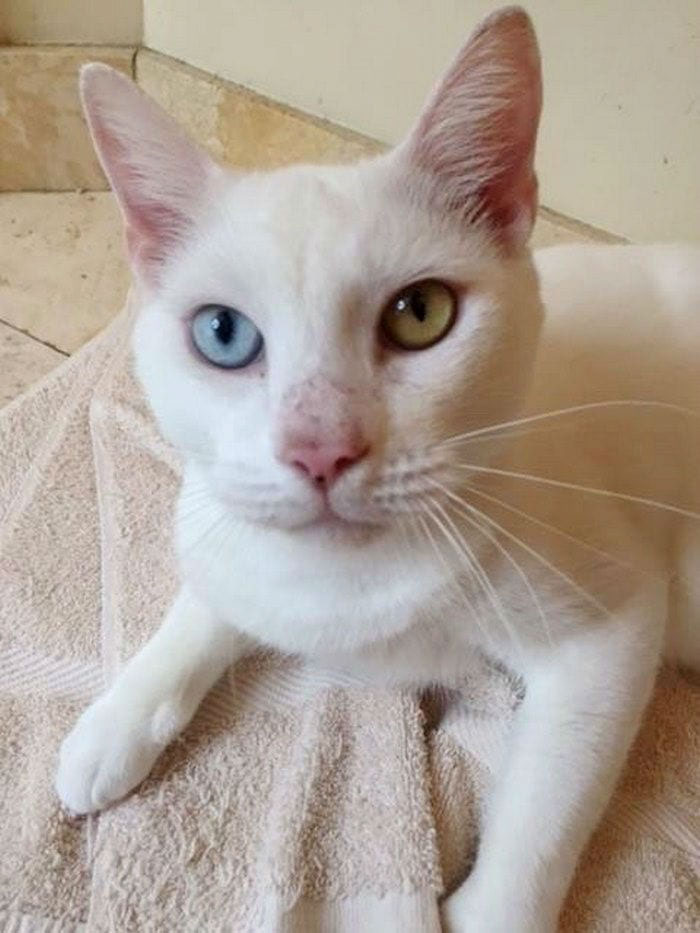 Carmen’s work is vitally important to the cats of South Florida, where there is a serious overpopulation problem. “I decided to start Animal Friends Project after I saw the huge amount of homeless cats in South Florida,” she told Bored Panda. “Most of these cats needed to be spayed and neutered and many were sick and injured and people and organizations did not seem to be doing much to help them. I imagined that by bringing awareness to this problem, people would become friends of the animals and would want to help them.”

“My husband, son, daughter and sister help a lot and I have a few volunteers and fosters but I do most of the coordinating and work myself since I am the one that visits the low-income areas where most cats live. Problem is that I find sick animals every time I visit these communities and it is hard to do things like educating and fundraising while I am tending to the sick cats. Lots of driving around to vet visits.”

“My advice is to please not ignore them. Anyone can help animals. Many sick stray cats are friendly and it is very easy to put them in a crate and take them to a vet. People can fundraise to pay for medical care. At least take photos and start asking for help.”

Working tirelessly for her feline friends, Carmen’s non-profit has provided Trap-Neuter-Vaccinate-Return (TNVR) services to hundreds of community cats in the area, but there is much more to be done! To help, you can donate here or perhaps foster or adopt a kitty yourself. Check out Carmen’s Facebook or Instagram for more details!