Menu
Photographer Christian Vieler caught these eager dogs anticipating, catching some more successfully than others and enjoying a scrumptious tidbit. From a tenacious terrier to a goofy golden retriever, these often hilarious and surprisingly beautiful photographs capture each dog’s unique personality in a way any dog owner will recognize and that all dog lovers will enjoy. The shots bring out the unique personalities of each dog. His models are quite happy to keep posing as long as they get their treats. Vieler has been documenting dogs’ reactions since 2013, and has now collected them all in a book called Treat.
As an amateur photographer, Christian Vieler only wanted to try out his shutter speeds. He never thought that he would make this his professional career. Capturing the right moment is the secret to success of this dog photographer. One day he got a call from a journalist who saw Christian’s photos on the Internet and wanted to publish the dog photos as a series. Christian agrees. In no time, his photos become a viral sensation. Now Vieler is very popular on his Facebook and Instagram accounts, as people are anxious to see his upcoming stunning photos.

Scroll down for your dose of doggy delights. 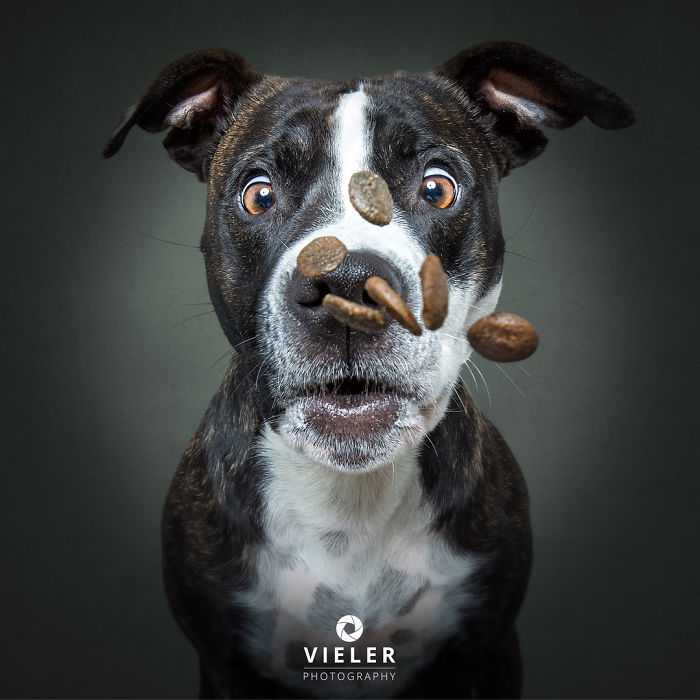 “I started doing the treat shots by accident and chance, Christian told. “I had never seen anything like it before, but I didn’t plan on doing that kind of photography either! Back in 2013 I got myself a flash with a big battery pack for outdoor use. The day my new toy arrived was a rainy one, so I started discovering all flash options in my living room – especially the capability of freezing motion. I wanted to use my own dog Lotte for my test shoots.”

“The problem was: She was a very chilled labrador and didn’t move in front of me. So what gets a lab moving better than a treat?! I started throwing and hit my camera button at the same time … just to find out the right settings for a “motion freezing setup.” Days later – when I cleaned my hard drives – I recognized how funny some results turned out. That was the birth of “Dogs Catching” 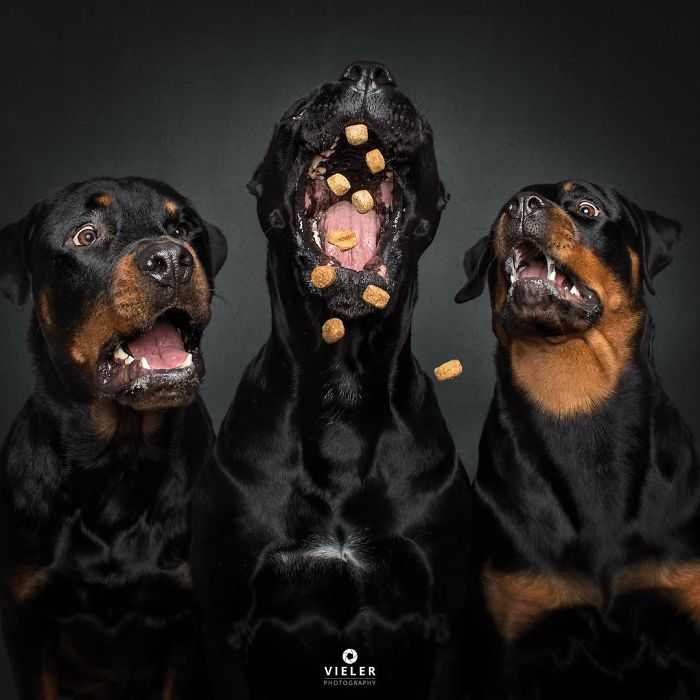 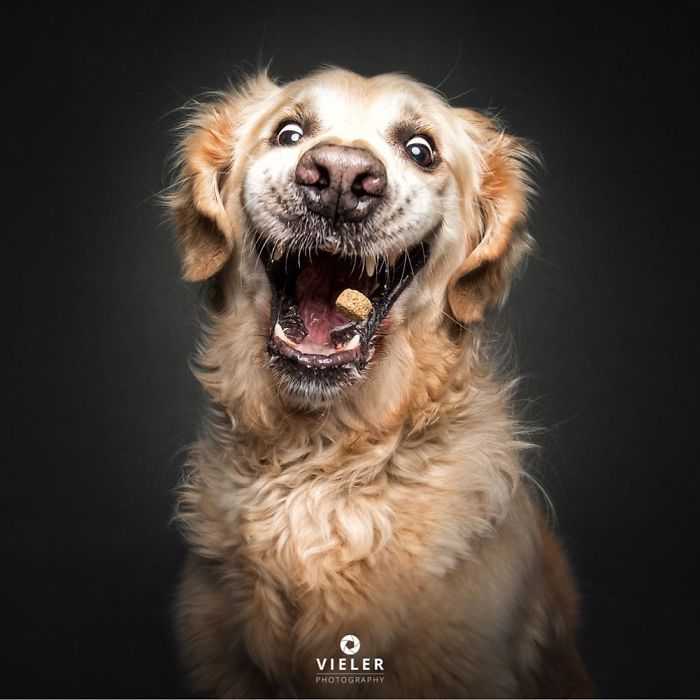 “Now, I work with dogs everyday. Photographing them is just the half of the work. To get good results, understanding and interacting with them is a very important part of my job. So I can say that this whole “Treat“ project hasn’t only brought me closer to dogs – dogs are my 24/7 life now!”

“I’ve worked as a professional dog photographer since 2016, so I am in a really lucky position. The cutest models find me, because clients make their appointments. But I search for for special breeds or kind of dogs, when I have new topics and ideas in mind, for example the variation ‘Puppies catching treats.'”

“Most of the dogs enjoy their photoshoots, that’s for sure. I use many treats – the really yummy ones, because my challenge is to become the best friend of the dog for a short time. Most of the dogs are really excited about the fact that someone gave them treats several times in a row and they didn’t have to do anything for it! And – to see it from another perspective: If a dog feels really uncomfortable, he denies all food. You can see the malaise in every part of his body and behaviour. So nearly every dog enjoys the shooting for sure.”

“There are a few, who are easily scared by all foreign things (like rooms, persons, even the floor). Those dogs are hard to shoot. That’s the point where you really have to work hard for a single photo. But I never ever force a dog in a situation, he doesn’t like. The reasons: First I would not stand it myself, and besides, there would never be a good picture for the reasons above.” 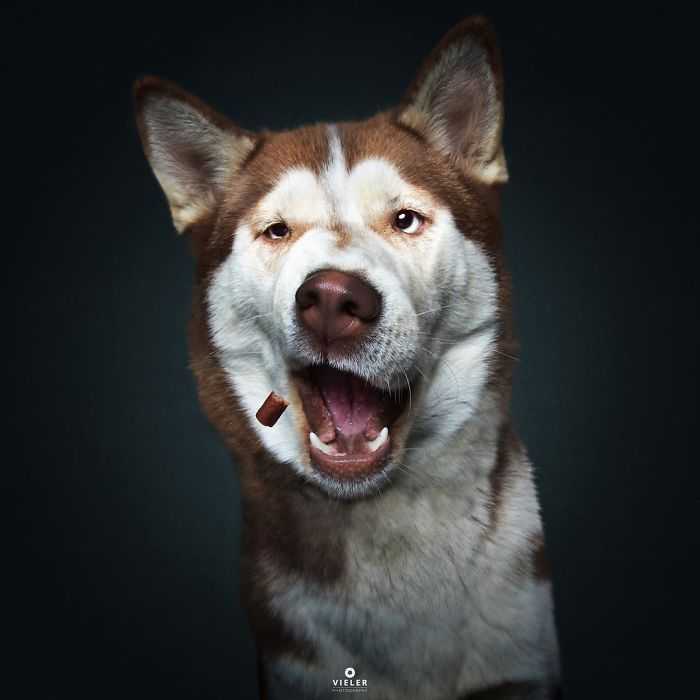 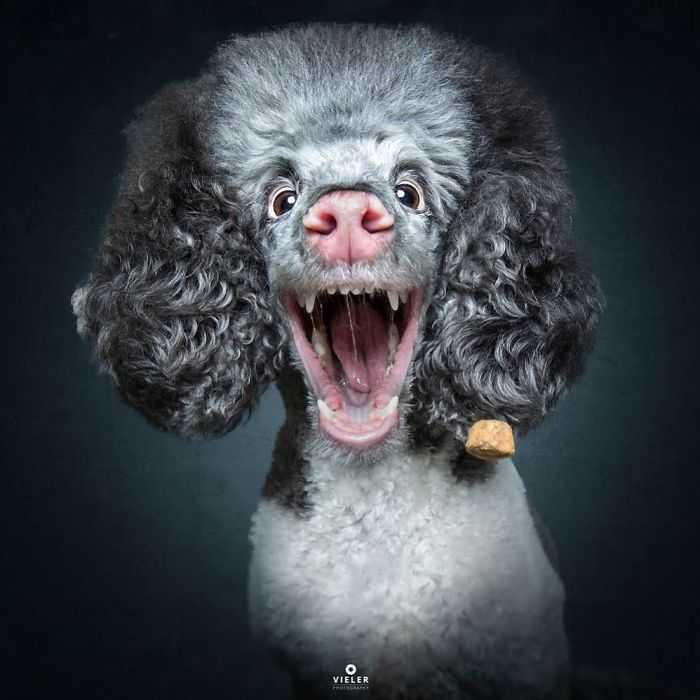 “All breeds are good for the job in general. I often need a perfect grab for a photo – a single movement towards the treats is often enough for a hilarious shoot. It doesn’t matter if the dog really catches the treat. But it’s harder to work with long-haired breeds. Because of the fur, you don’t see any movements in their face – sometimes not even eyes. So, short haired dogs let hope for better results.”

“Most dogs successfully catch the treats – when we do it as an normal exercise. But – once I have a couple of shots – I throw faster to evoke new expressions. There is no really chance for them to get the treats, even if it looks like in the pic, that the treat is flying straight into the mouth.” 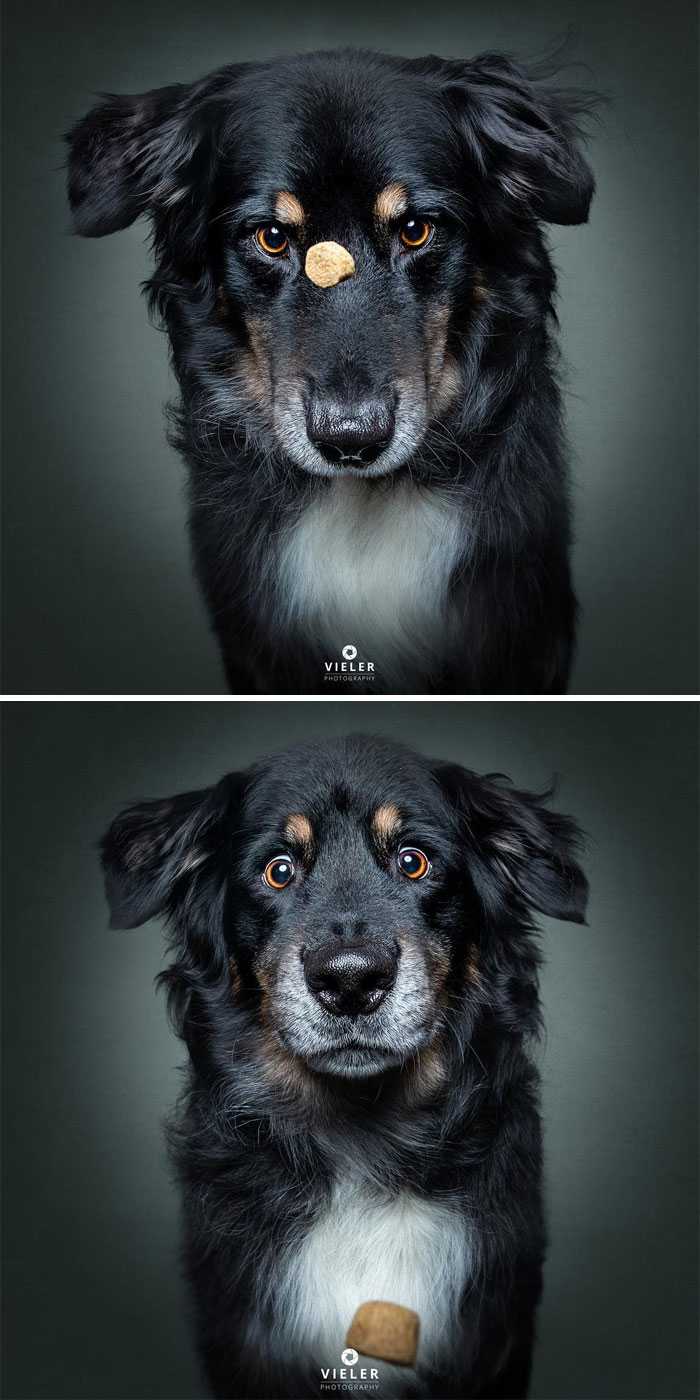 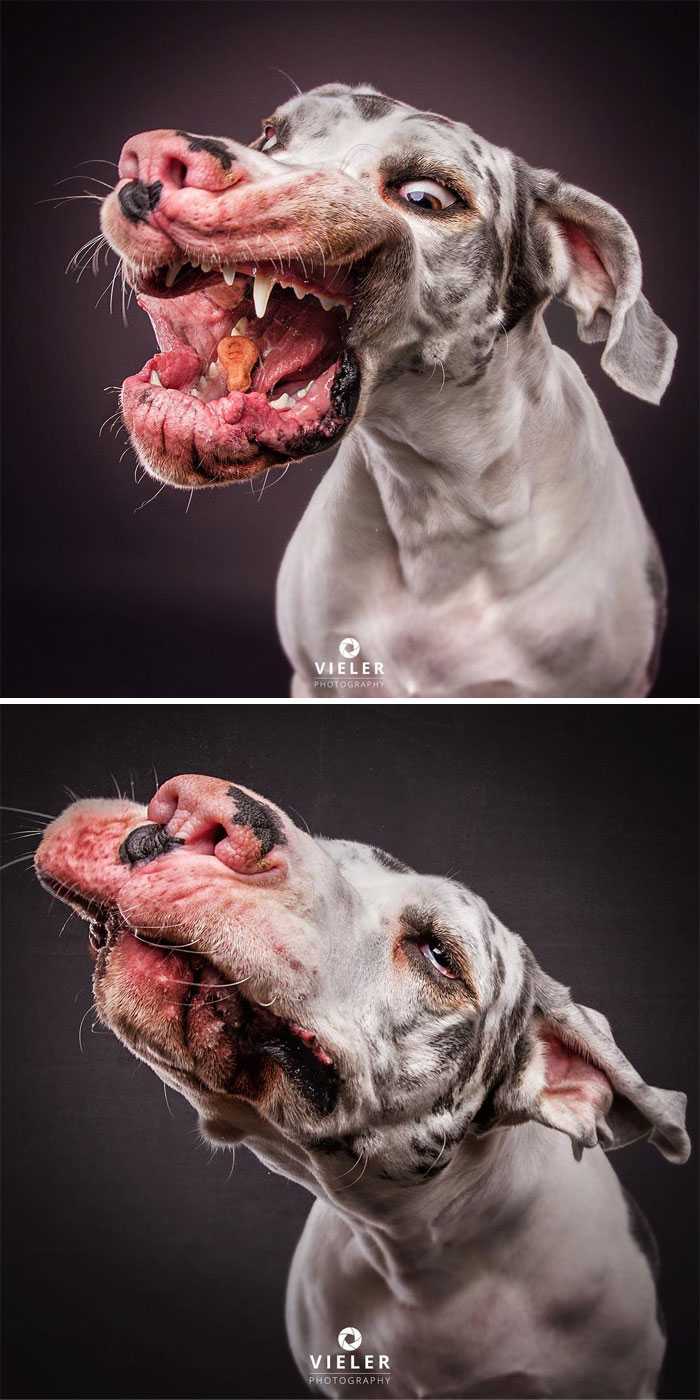 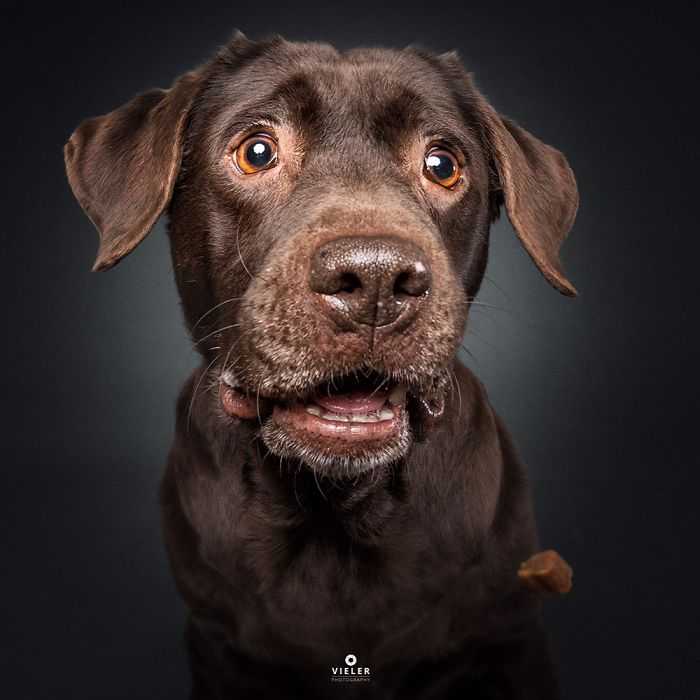 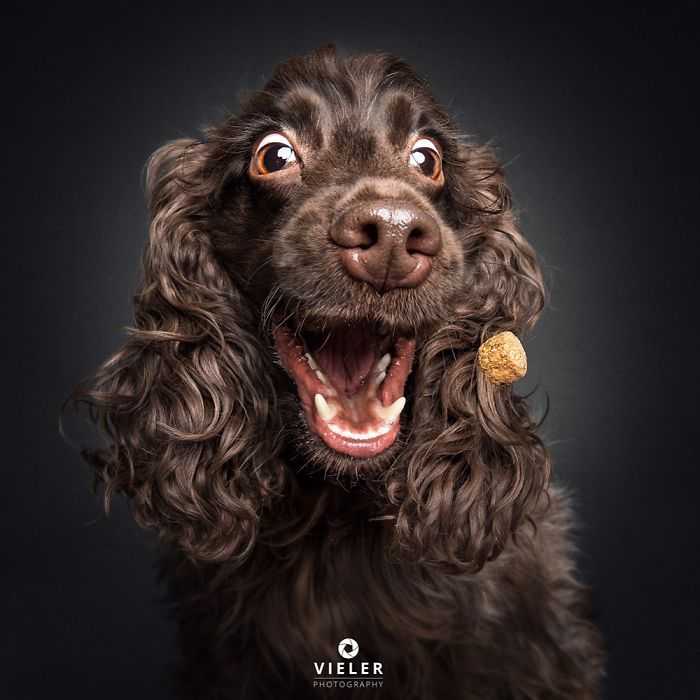 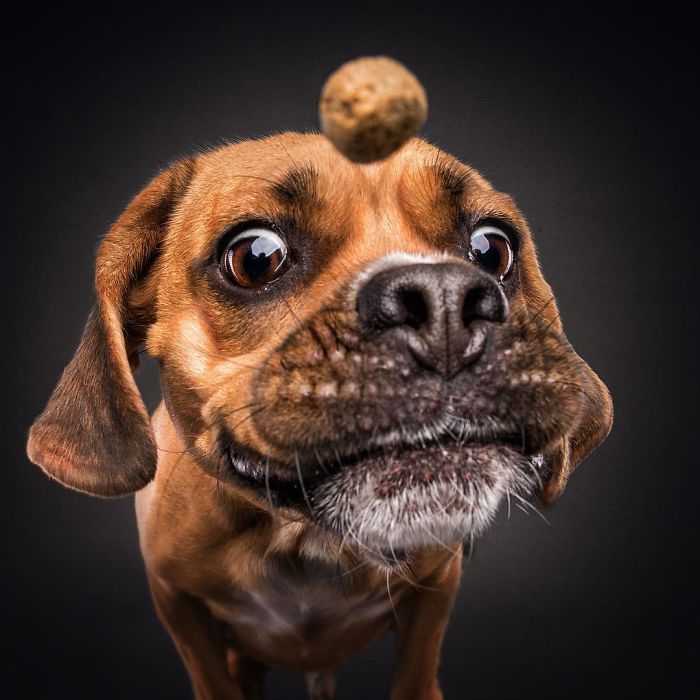 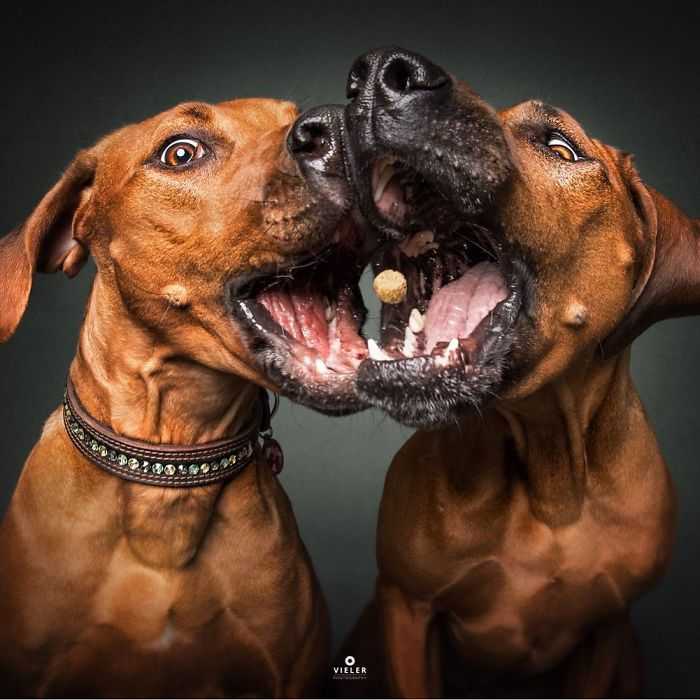 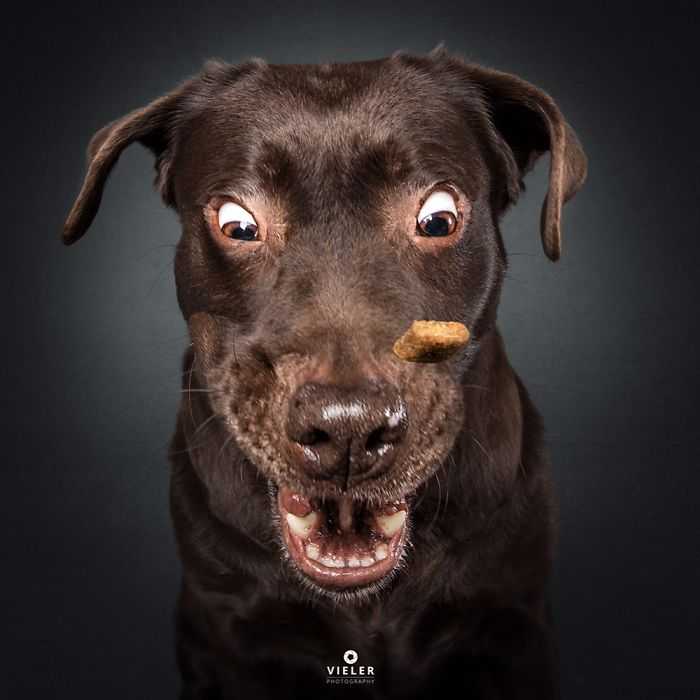 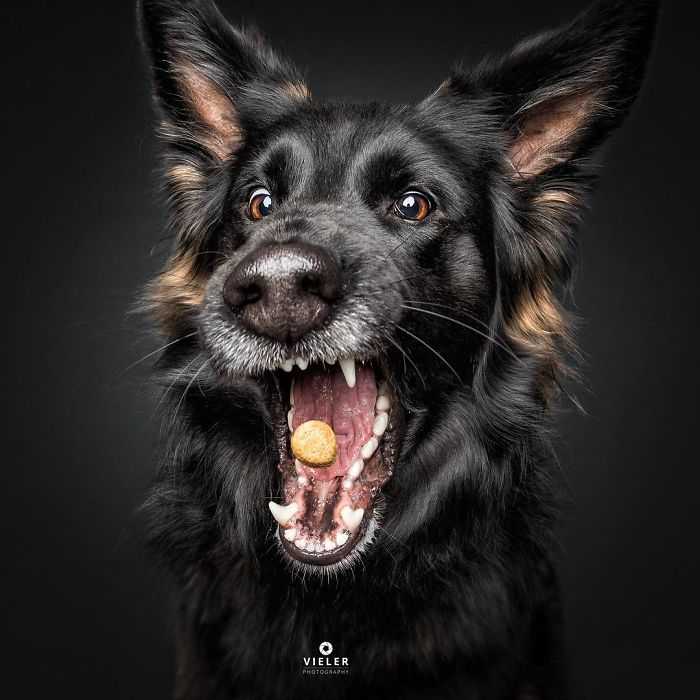 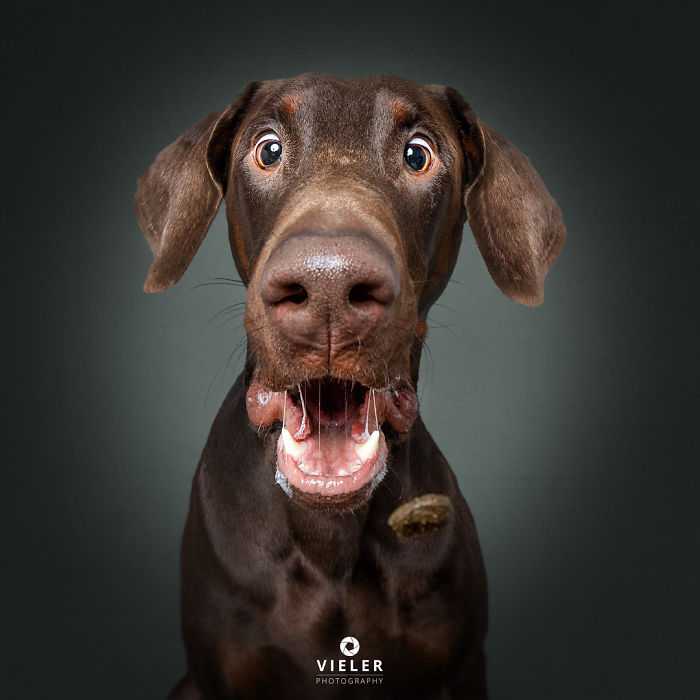 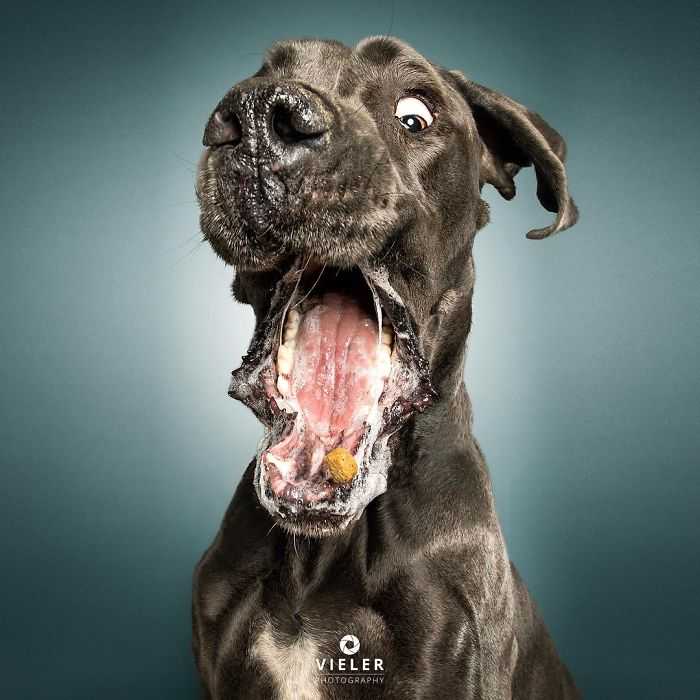 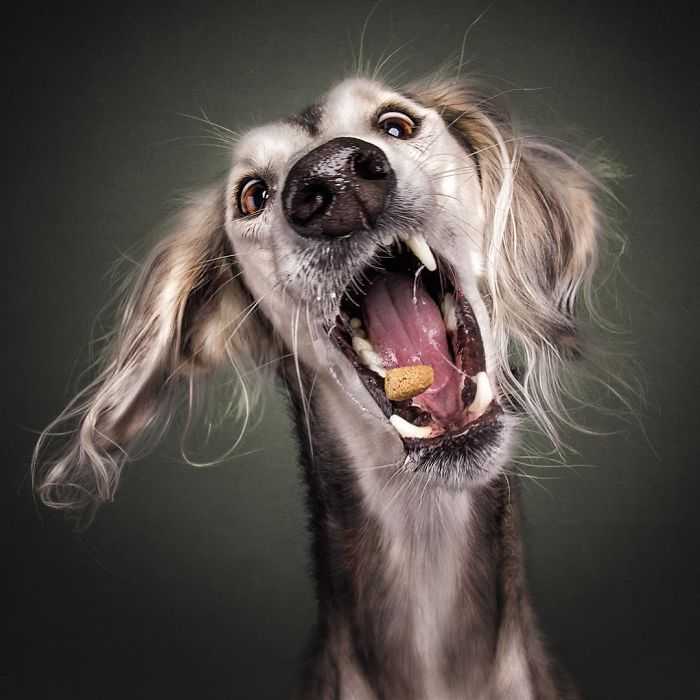 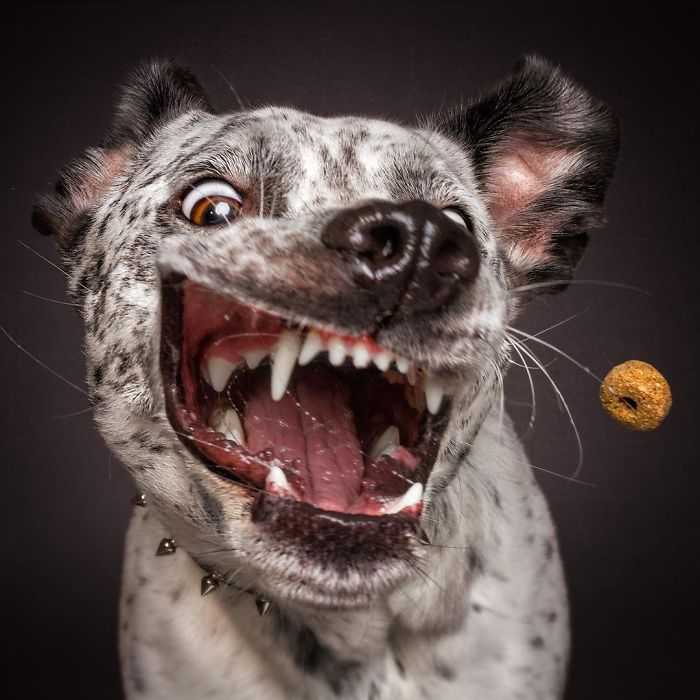 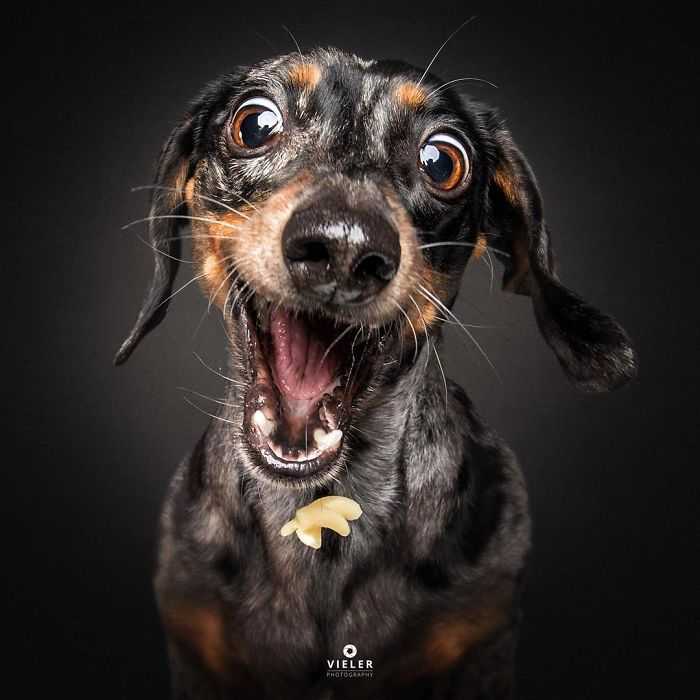 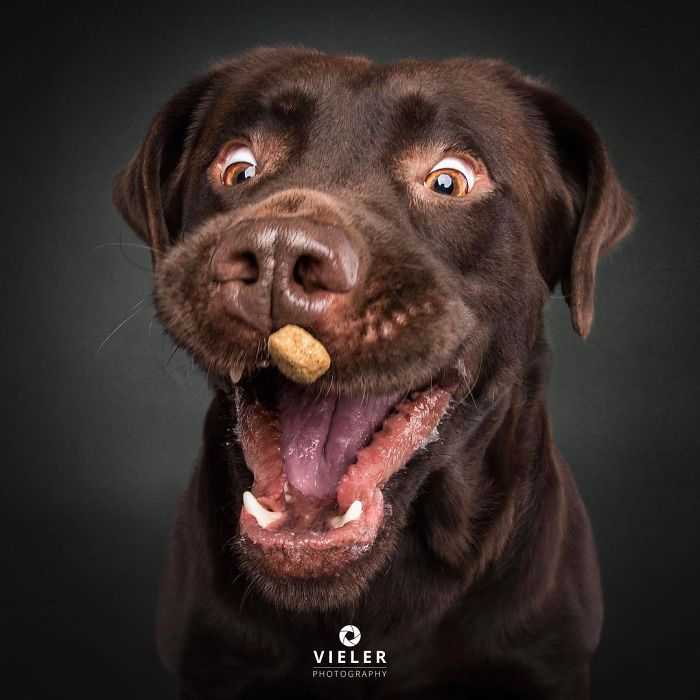 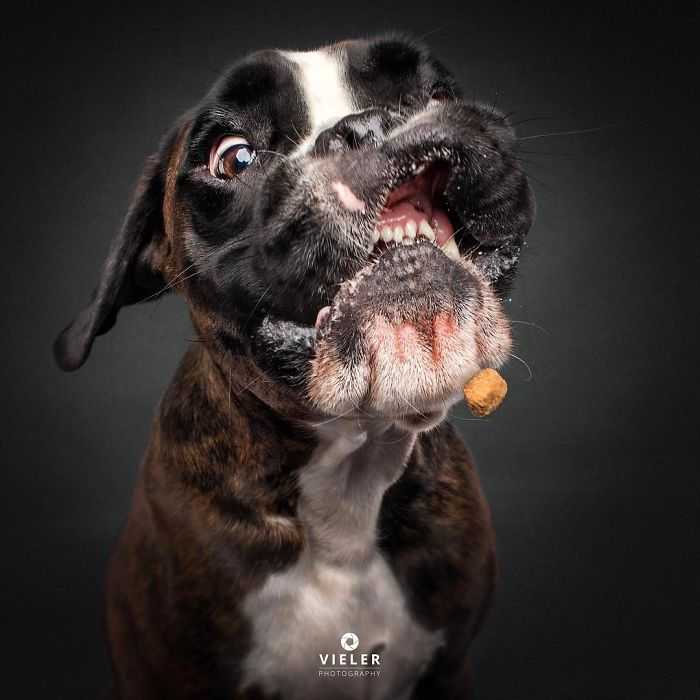 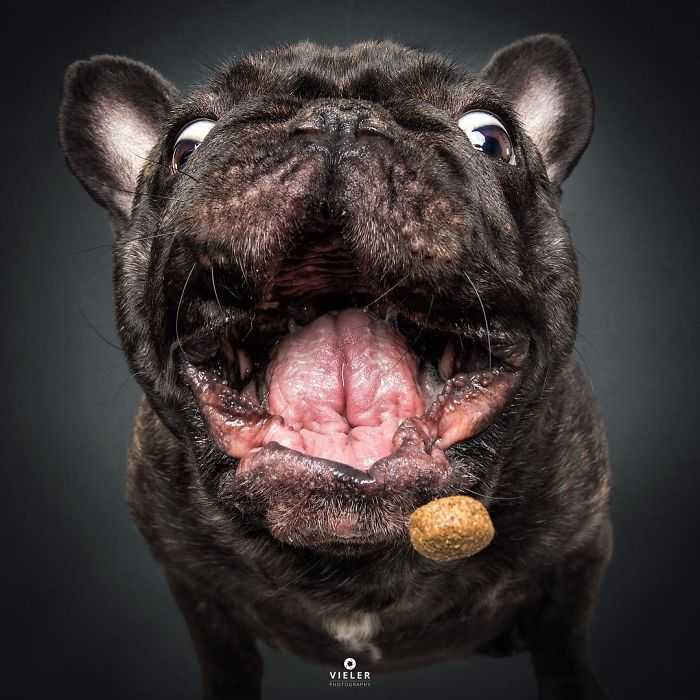 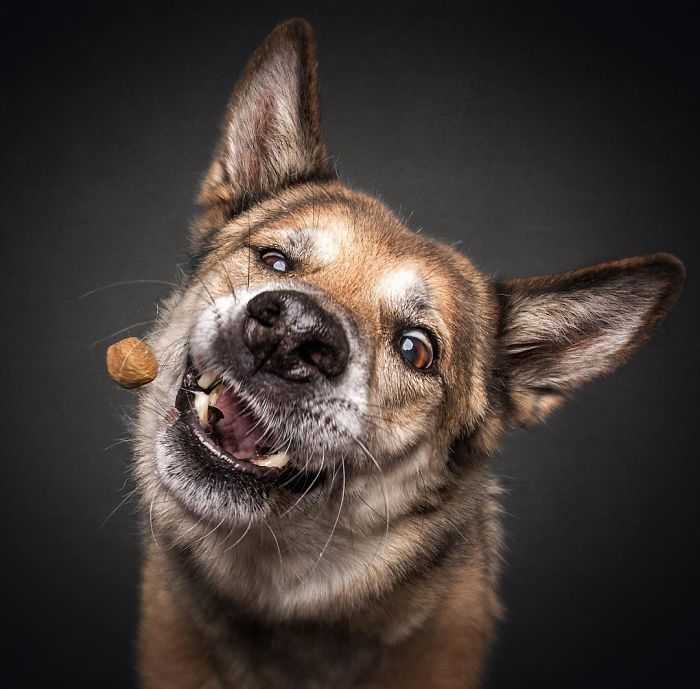 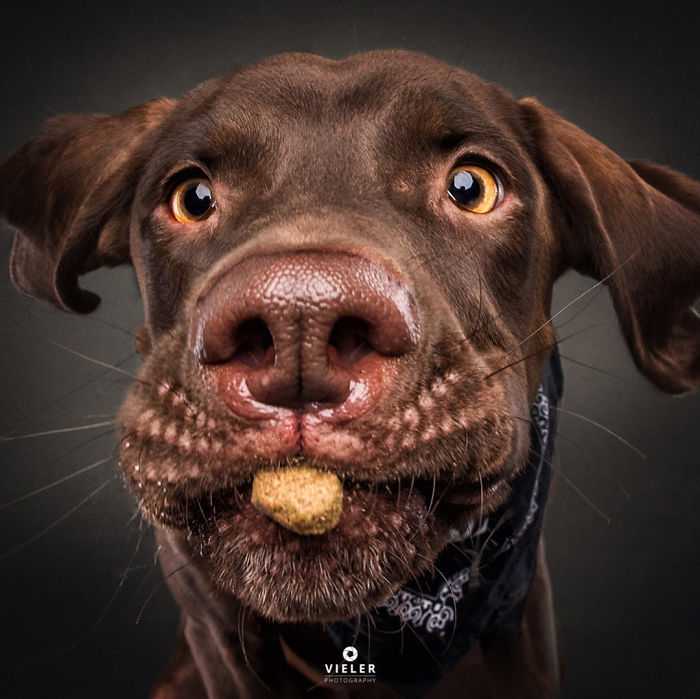 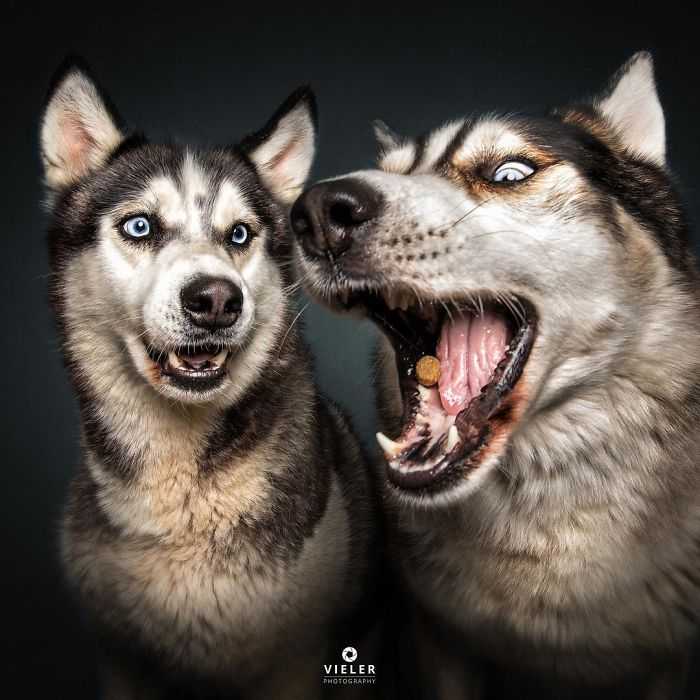 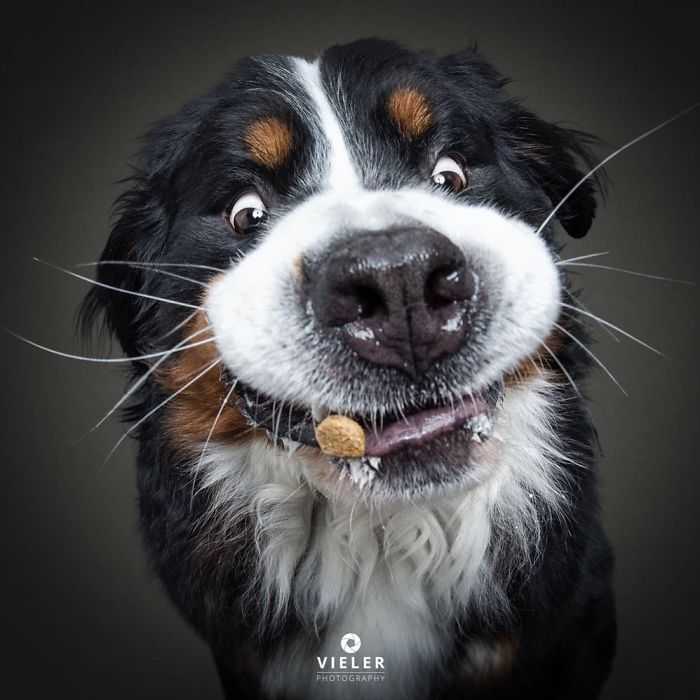 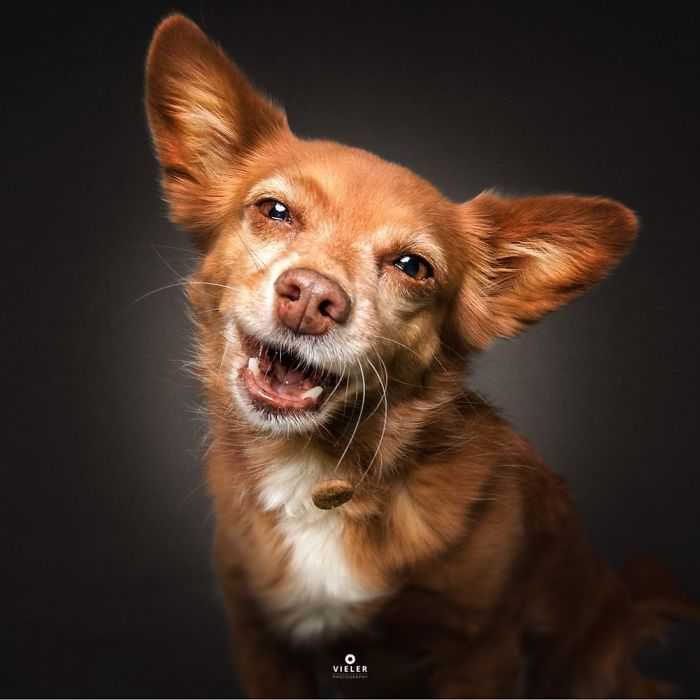 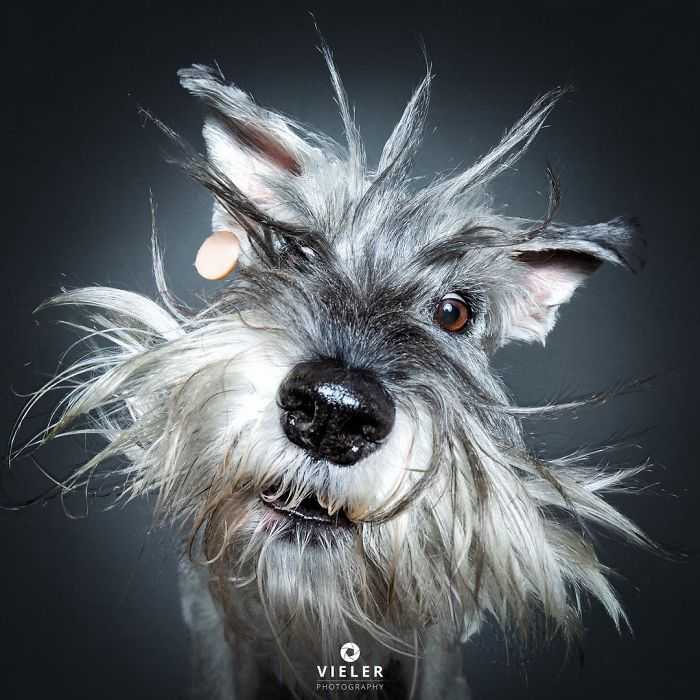 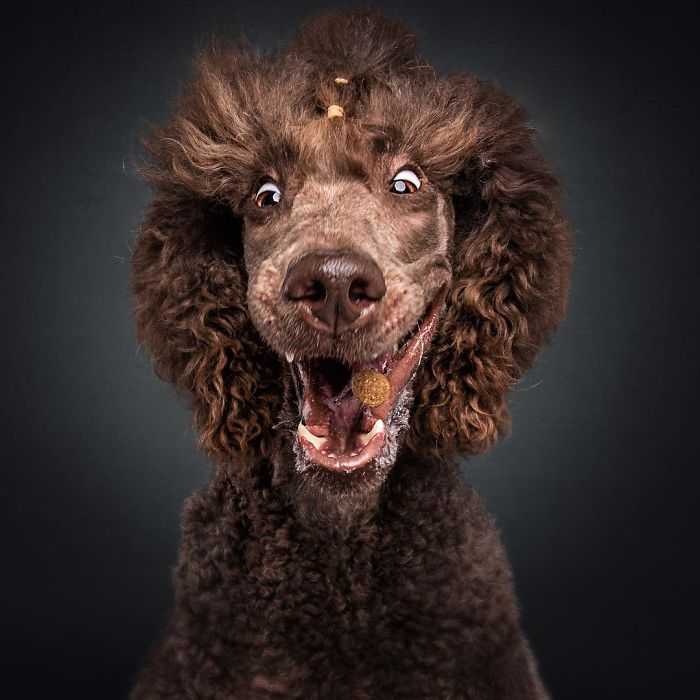 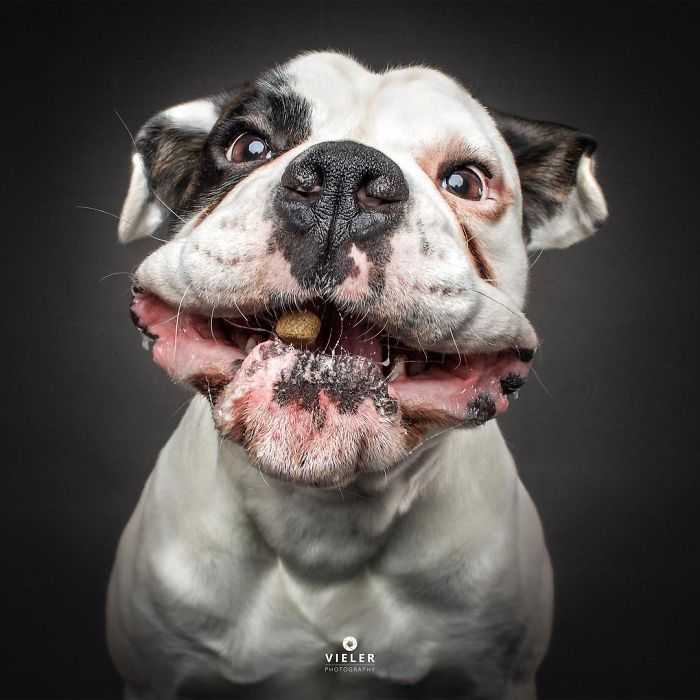 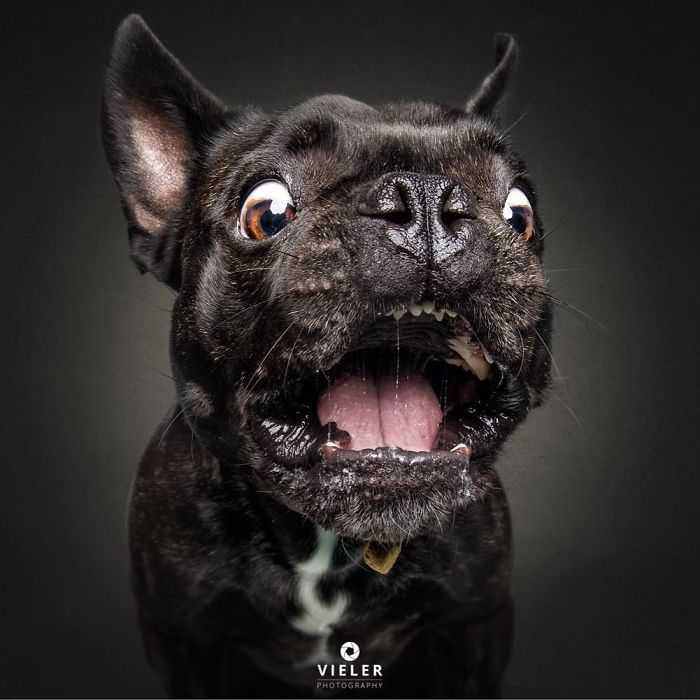