Here is an amazing story to share with you. 50 years old lady,Karen Turner, owned a cat who had four white hairs on his chest. The cat was named Sammy. One day, she discovered the body of a black cat on the side of the road the day after her beloved cat Sammy went missing.

‘The previous night was the first time in six years, since he was a kitten, that Sam had not come home.

She checked whether the cat had four white hairs on his chest, on seeing it was confirmed that the cat was hers. ‘When I first turned that little body over and saw the white chest, I just knew it was my Sammy and my heart skipped a beat or two.’‘When she reached home she was numb, and didn’t really know what to do.

‘Then I thought of my dad, John. He’s very kind and sensitive and I knew that if I lost it and broke down it would upset him terribly.’ She decided to took the dead body to her father John’s house in Radford Semele, Warwickshire. Mrs. Turner took this decision because she knew that her Jack Russell terrier Alfie might dig up the grave in her own garden. So, it’s better to went there. 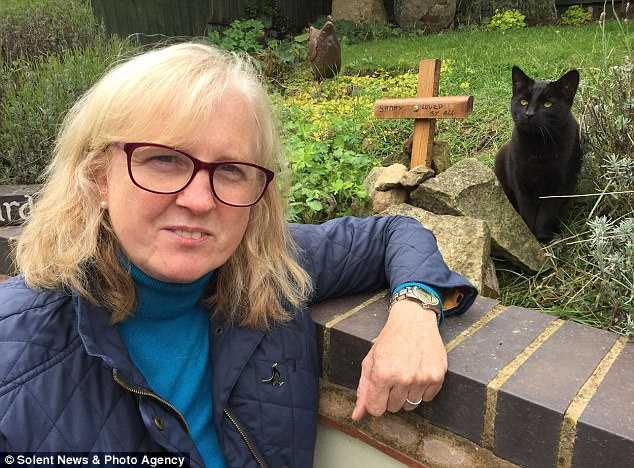 She and her father went for the burial and created some rockery over the grave and marked it with a wooden cross bearing the epitaph: ‘Sammy. Loved by All’.

‘So I just kept my emotions in check and we did our best to make a nice resting place for Sam with a quiet ceremony.’ Karen adored Sammy so they had a quiet little ceremony, a few snuffles and tears and a final goodbye to her dear pet.

‘Back home I was really down, but managed to keep on top of things and kept myself busy. ‘I was also worrying about David [her husband] coming home and having to tell him the news because he’s as daft about animals as I am. ‘So when he came in the door I just fell to pieces and blubbed away for ages.’

But the next thing shocked the lady so much. After several hours, Karen heard a scratching at the kitchen door and she watched Sammy walked behind the other cat Jack. Recalling the moment she found what she thought was Sammy by the roadside, was some another cat exactly resembling her cat. It’s a real shock when suddenly you see your dear, departed pet come strolling back from the dead. It all seemed so unreal and crazy to see her cat alive. 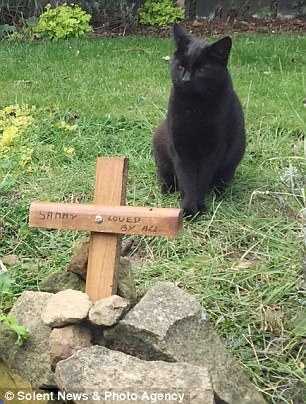 She then said: ‘I didn’t know whether to laugh or cry. I was almost hysterical and found myself scolding Sam like he was a naughty little boy. ‘I was saying to him: ‘You are supposed to be dead. Where the heck have you been?’

Her husband was also surprised, the look on his face was shocking, he was so happy to see Sammy fit and well and back to his home. Now they tried to find out the owner of the dead cat through social media. They scanned the village’s Facebook community site for three days until a post appeared reading: ‘Has anyone seen a beloved black cat missing for four days….owner terribly upset.’ 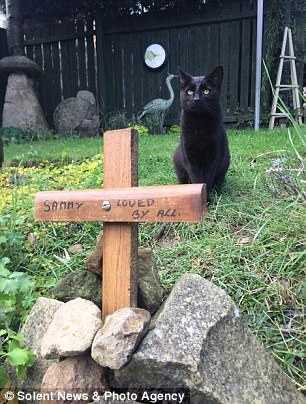 The owner of that nine years old cat Maurice, was Pensioner Lister De Lara Taylor, who was living in the same village. Mrs. Turner had told the news to her on the phone.

She stated: ‘My dad said she would be welcome to visit and see the lovely little shrine we’d made for her pet.’ Mrs. De Lara Taylor requested her to give back the dead body of her cat. Mrs Turner agreed to have Maurice removed from her father’s garden by John so he could be cremated alongside all of Mrs. De Lara Taylor’s other pet cats. Mrs. De Lara Taylor was extremely thankful for them for all the kind services to Maurice, but was happy to have found him.

She stated: ‘I was so sad, but when Karen told me the lengths they had gone to, giving my lovely boy such a decent sent off, I was extremely moved by their kindness. Now Maurice is with all his friends, all my other pets, and I am so grateful.’