Cats are considered as clean and clever animals, and this is observed in their toilet habits too. They will always prefer to go in a litter box if provided, or some loose sand or earth outside, rather than directly on the floor. Most cats learn from their mothers at a very young age to use a litter box, but recently-adopted stray or feral cats may not know how to use a litter box. Sometimes even a well-trained cat may seem to forget and start relieving himself around the house. This cat has good manners and didn’t forget it’s training. It found itself in a dilemma recently when it found itself locked out of the bathroom where the litterbox is situated.

However, the truth is that it is relatively simple to teach a cat or kitten to use a litter box because it appeals to their instincts. Lone feral cats will naturally cover their waste without any training; they do so to cover the scent from predators and competitors.
Tino is both fastidious and clever. He has noticed where the clean litter comes from, so he located the bag. Desperate in a way that anyone who really needs to go will understand, Tino then knocked the bag on its side and managed to access the litter with a quick scatter onto the floor. He felt relieved now. 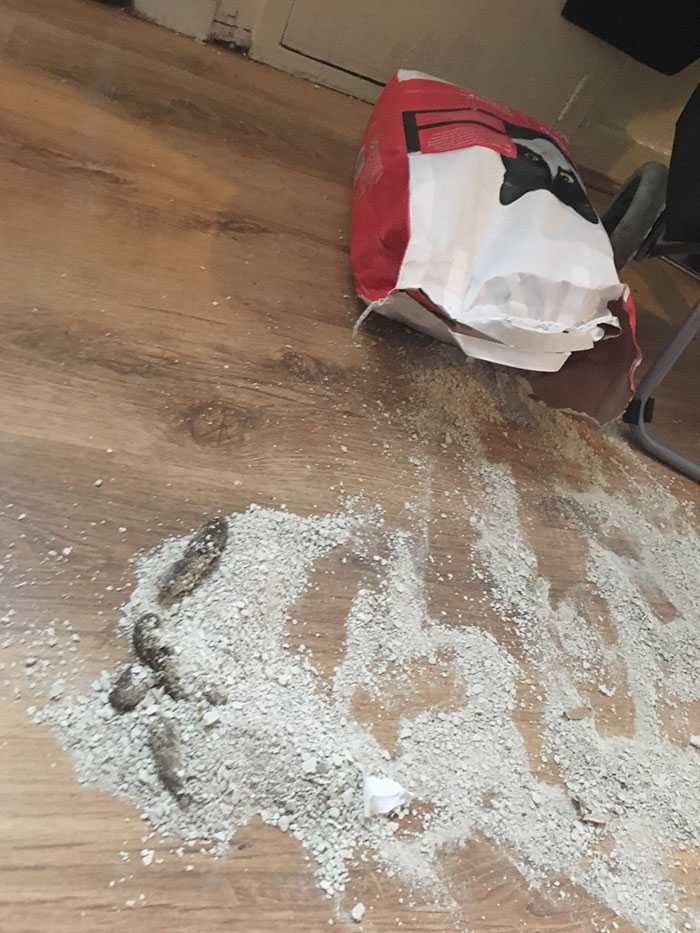 The funny post inspired some hilarious comments and even a poem. Have a look…. 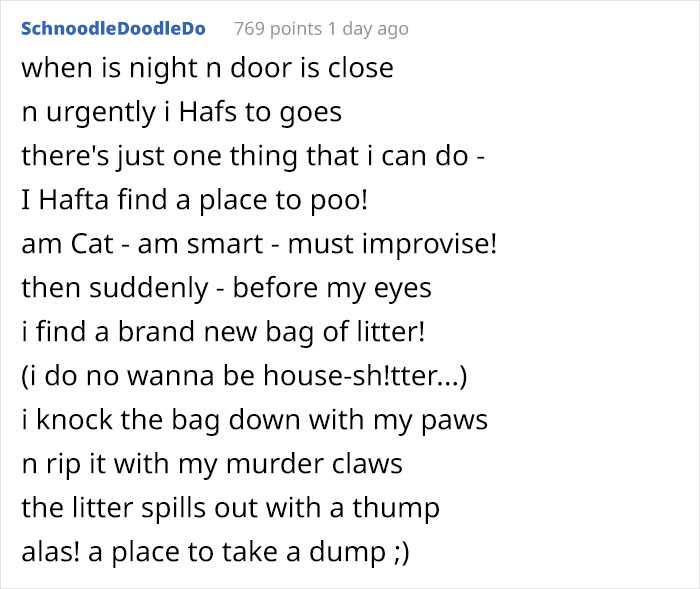 This cat showed intelligence and deserves much more than appreciation. 8080x tells the truth about her clever kitty. “I honestly have no clue how or why he decided to put all this effort into doing this,” she explained. “I was quite surprised when I woke up to see the situation on the floor because he’s usually naughty and care-free. He has pooed in shoes before in other times that I accidentally forgot the toilet door closed. So I’m not sure why this time he decided to act responsibly!”

“I’m guessing it’s just because this time he smelled the litter bag, which he knows is the same smell as where he is used to pooping. Did he do this because of ‘cleanliness?’ No, not really. He sometimes doesn’t even cover up his poop, so I’m confused as to why he decided to do it this time! He also sometimes poops on the side of the litter box. If I’m being honest, he really doesn’t give a crap about these kind of things – he just does whatever he wants and whatever he feels like. He’s the kind of cat to deliberately knock over your things off the desk with his paw. For absolutely NO reason. He’s super cheeky, hence why I was surprised when I woke up to see that he put all this effort into acting responsibly…”

8080x says the reaction to her post has been completely unexpected, people admired this act of this cat with their comments on the internet. She just loved the poem though. “I just thought a few people would find it funny and that’s it…had no clue it would get 18k upvotes and over 500 comments,” she told us. “I just decided to post about it because I was bored one evening. Little did I know 18k people would like a picture of poop.”

“I was literally laughing out loud to myself at night when I read the poem!” 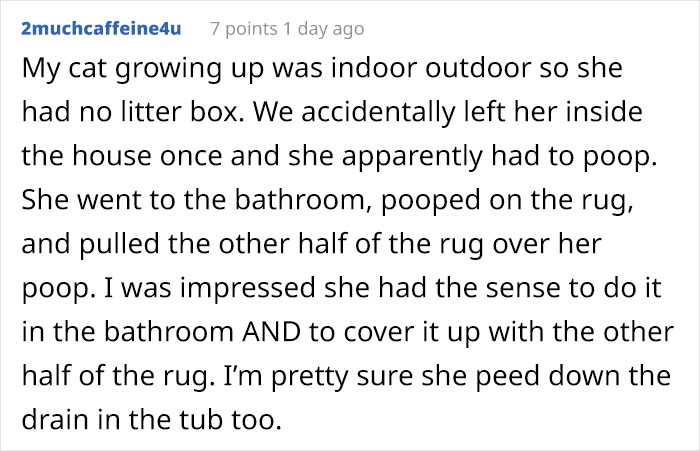