Burmese are social cats who thrive on the companionship of their family or other pets. If no one is at home during the day, it’s best to get a friend for the Burmese, so he won’t be lonely. The Burmese is highly intelligent.Burmese are compact but heavy, often described as bricks wrapped in silk. That doesn’t preclude them from being active and acrobatic. Their short, fine, silky coat comes in the original dark sable brown as well as dilute colors.

Meet this cute Burmese cat Jamie, he is 13-year-old who was put in the shelter when his owner moved to the nursing home. When Jamie was handed over to the RSPCA Australia, he was in miserable condition. Suffering from cat flu and kidney problems, he was kept under special medical care. Even after getting healthy, the staff was worried that who will adopt him. All their worries vanished away when a young woman named Sarah Dempsey adopted him one day while looking for the cats in the shelter. Sara told that when she met Jamie for the first time, he was sleeping peacefully but woke up the when she bent down to look at him. She also said that she was aware he would remove her all loneliness.

She adopted him and took him home, and now he won’t leave her side for a minute. “He likes talking to me at night and follows me around my apartment,” says Dempsey. The most cutest thing about Jamie is that he won’t sleep unless Sarah holds his paw. She says: “If I let go he wakes up, meows, and claws my hand back to him.” She finds it a sweetest moment, sleeping side by side holding hands. “I think we’ve bonded already,” says Sarah.

Here’s Jamie who won’t sleep without Sarah holding his paw. 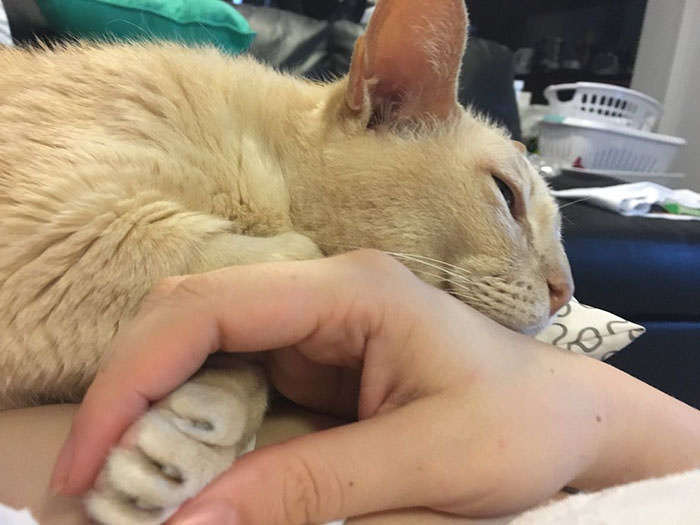 When his owner moved to the nursing home, he was put in the shelter at the age of 13. 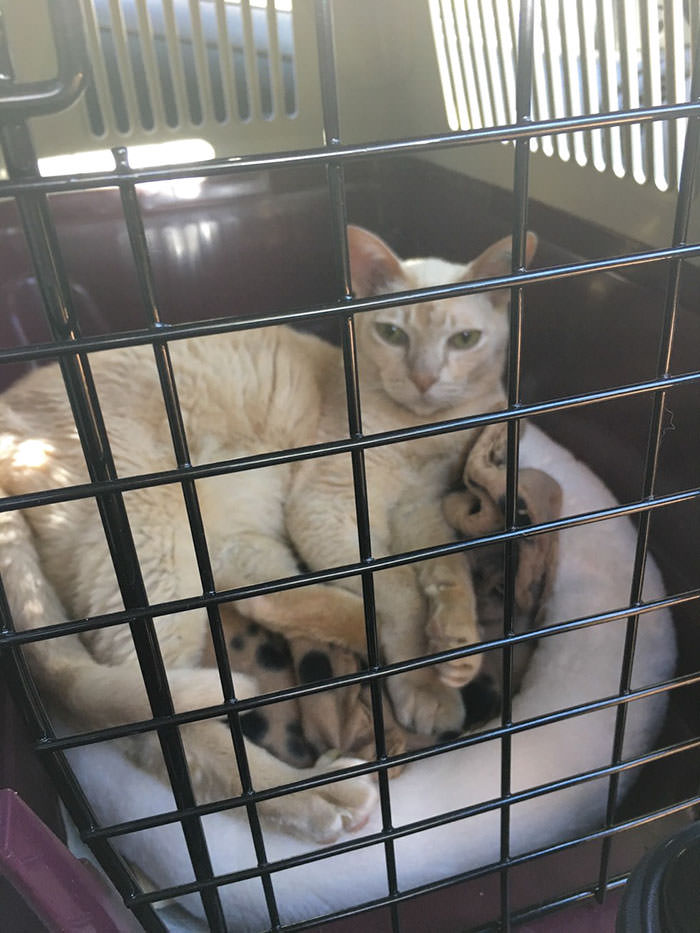 A young woman, Sarah Dempsey adopted him. “He won’t leave my side… He is extremely affectionate” says Sarah. 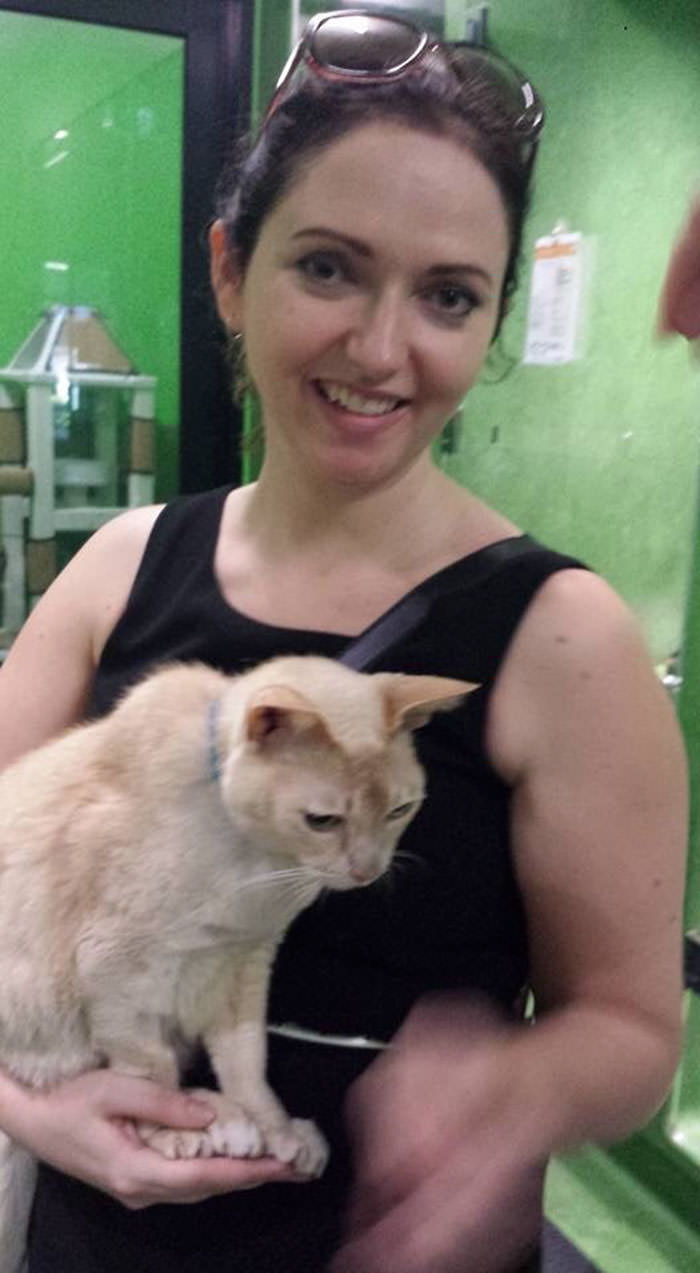 The cutest thing is they sleep together. 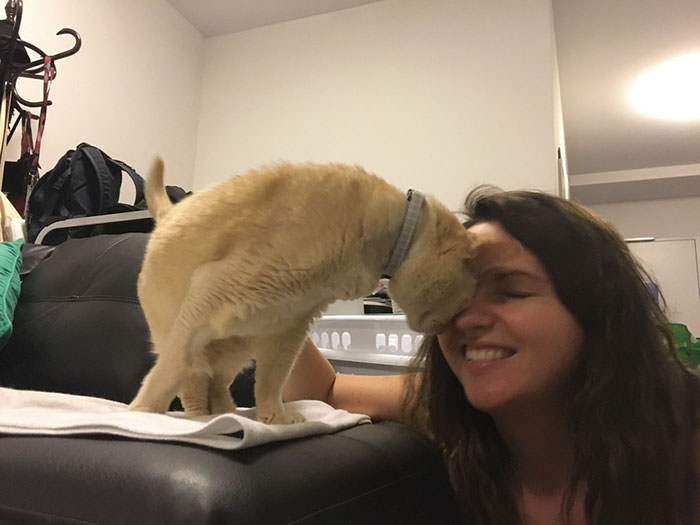 If she lets go his paw, he wakes up immediately, meows and sleeps again after clawing her hand back to him. “I think we’ve bonded already.” 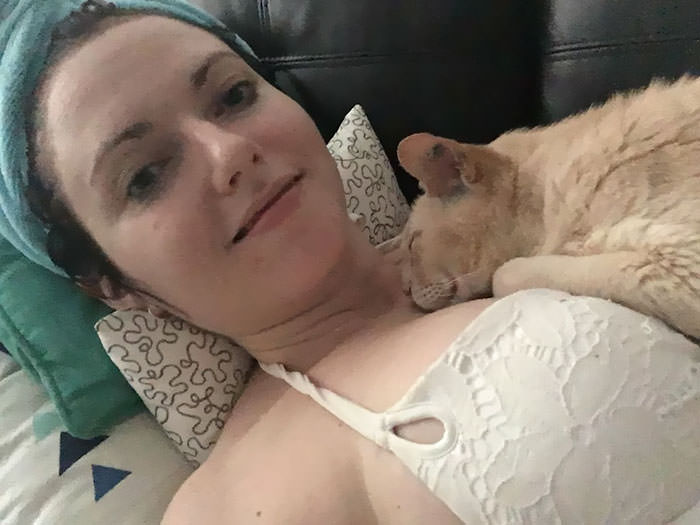