On Nov. 30, 1835, the small town of Florida, witnessed the birth of its most famous son. Samuel Langhorne Clemens was welcomed into the world as the sixth child of John Marshall and Jane Lampton Clemens. Little did John and Jane know, their son Samuel would one day be known as Mark Twain – America’s most famous literary icon. Approximately four years after his birth, in 1839, the Clemens family moved 35 miles east to the town of Hannibal. 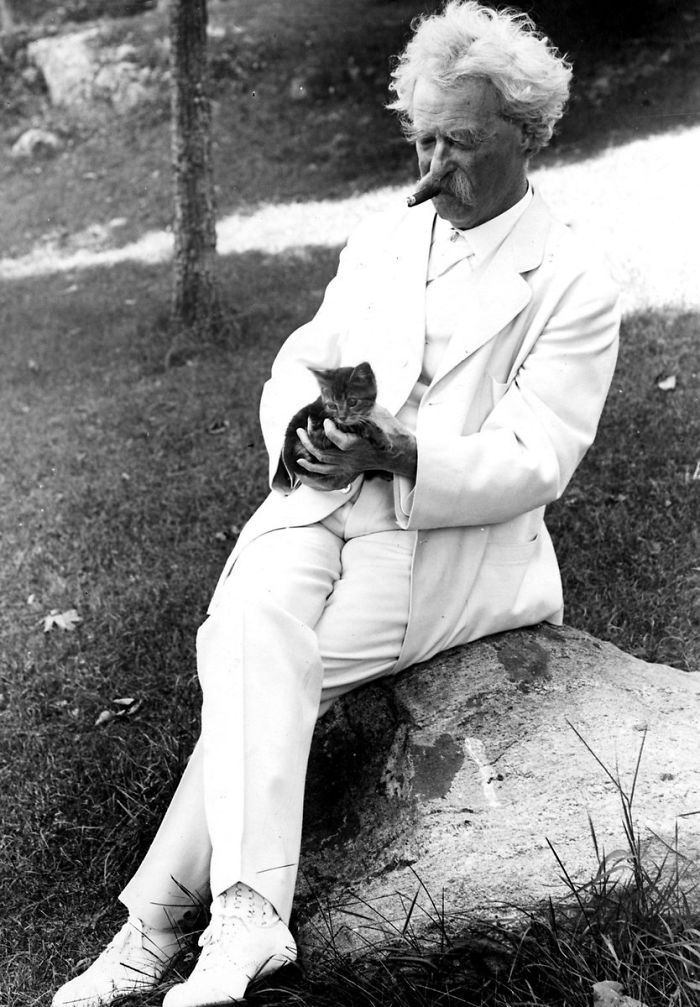 Samuel Langhorne Clemens, also known as Mark Twain, was a major American writer from Missouri. His stories and novels are famous for their humor, vivid details, and memorable characters. His best-known works are The Adventures of Tom Sawyer and The Adventures of Huckleberry Finn, both classics in American literature.
He has been praised as the “greatest humorist this country has produced”, and referred to as “the father of American literature.” His keen power of observation and sharp memory later provided him with a wealth of inspiration that he used frequently in his writings. 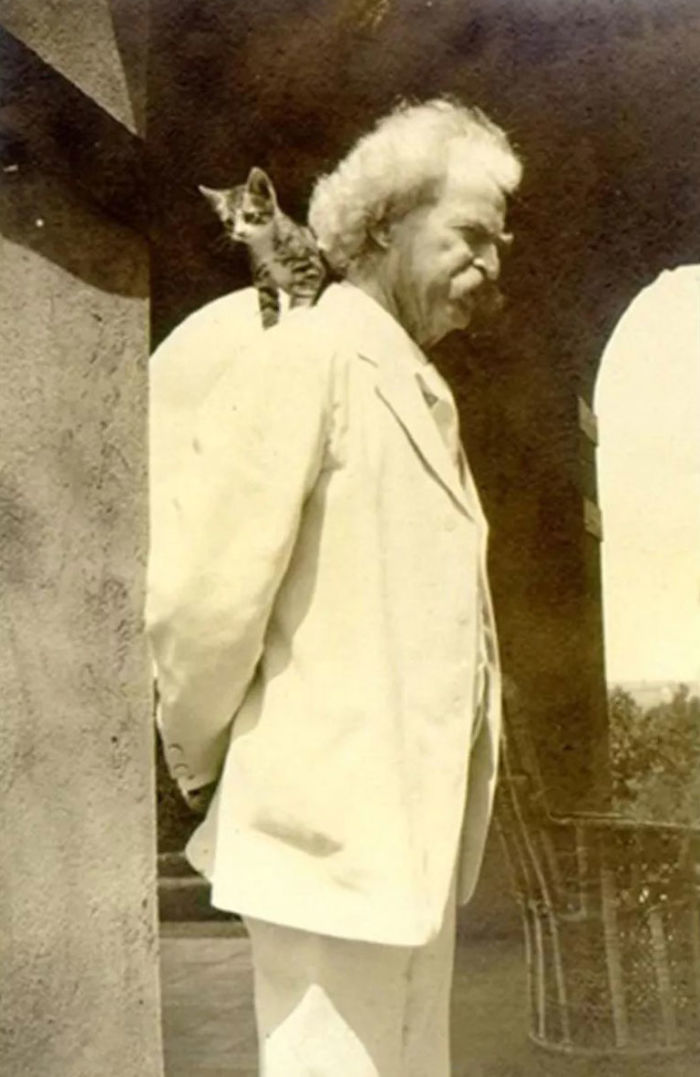 Mark Twain loved cats. He once said, “I simply can’t resist a cat, particularly a purring one. They are the cleanest, cunningest, and most intelligent things I know, outside of the girl you love, of course.” Twain has an enduring love for cats, whom he respected far more than people. “If man could be crossed with the cat,” he once wrote, “it would improve man, but it would deteriorate the cat.”  Twain’s interest in cats took its own strange twists and turns. 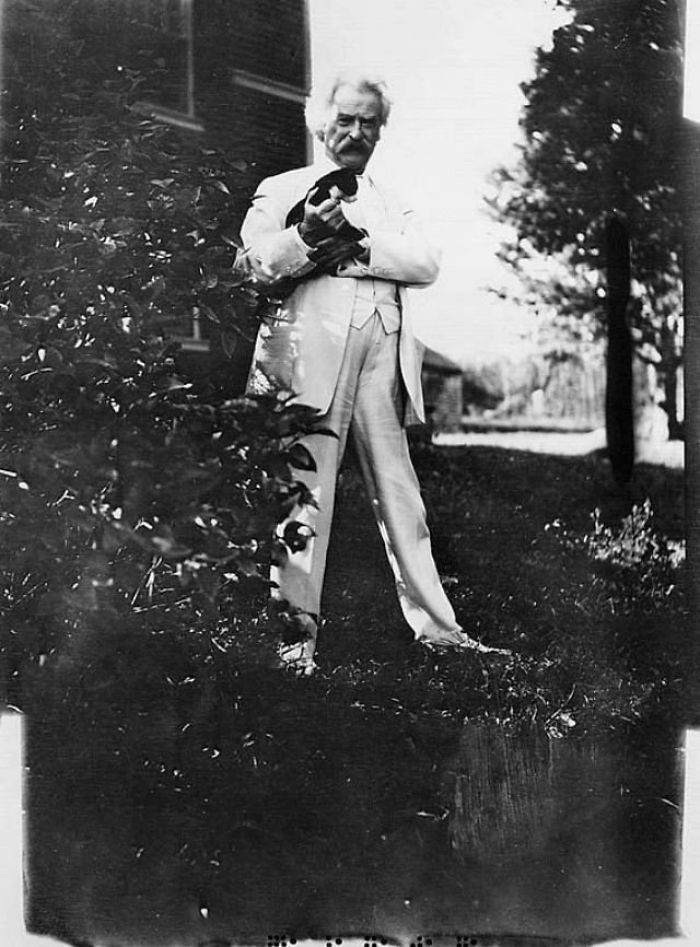 Twain owned up to 19 cats at one time, all of whom he loved and respected far beyond whatever he may have felt about people. His cats all bore fantastical titles, among them: Apollinaris, Beelzebub, Blatherskite, Buffalo Bill, Satan, Sin, Sour Mash, Tammany, Zoroaster, Soapy Sal and Pestilence. 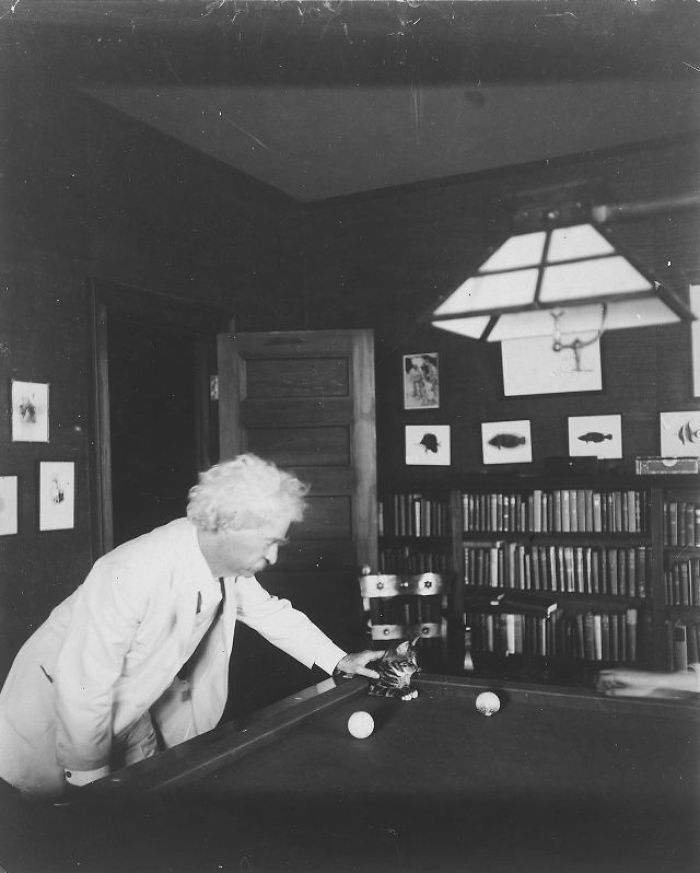 Twain also wrote cats into his fiction. “Cats make cameos in some of his most famous works,” writes the National Portrait Gallery.  In The Adventures of Tom Sawyer, a cat named Peter is actually a true story from Twain’s childhood. There was even a book called Concerning Cats: Two Tales by Mark Twain,which came out long after his death in 1910. This book tells two stories about cats which he used to read to his daughters to help them fall asleep. 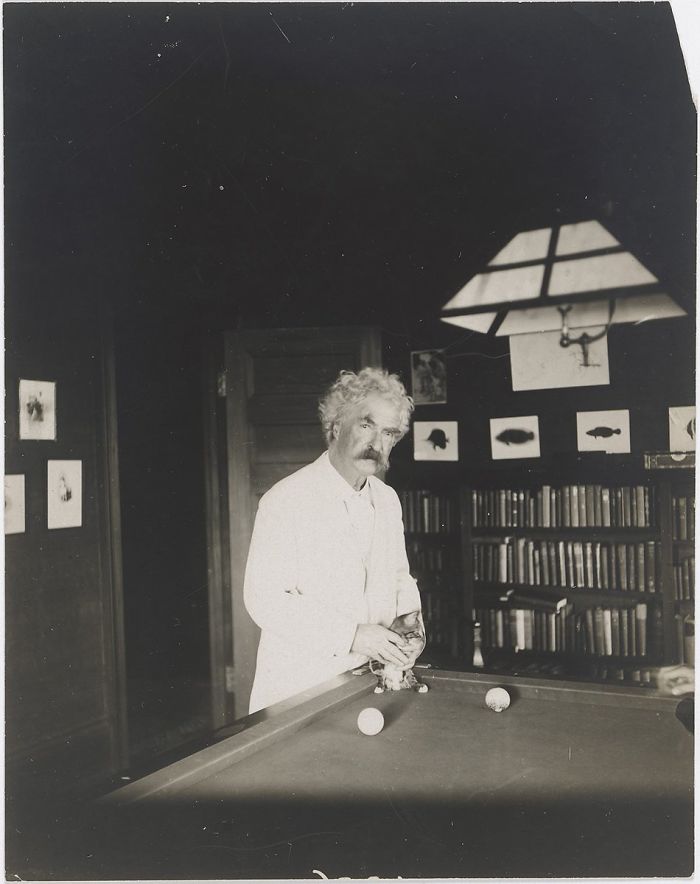 Throughout his life, when Twain travelled he would rent cats to take the place of his left-behind companions. “The most famous cat-renting episode occurred in Dublin, New Hampshire, in 1906,” according to an article in New England Today,“Twain biographer Albert Bigelow Paine was there when the author rented three kittens for the summer. One he named Sackcloth. The other two were identical and went under the joint name of Ashes.” He couldn’t travel with the cats, so he’d rent them and then leave behind money to help cover their care during all nine of their lives. 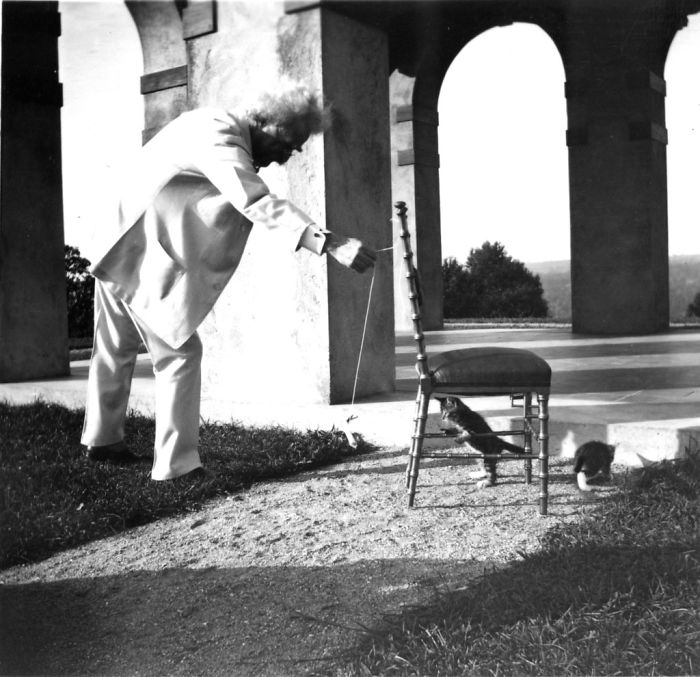 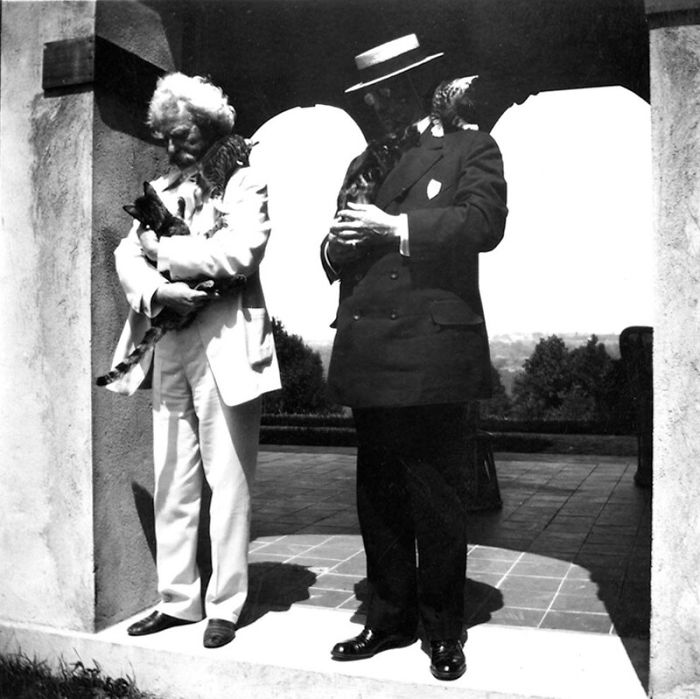 Twain was not being alone in his love of cats: many famous nineteenth- and twentieth-century American writers kept and loved cats, among them T.S. Eliot, Patricia Highsmith and Ernest Hemingway, according to Sean Hutchison writing for Mental Floss. 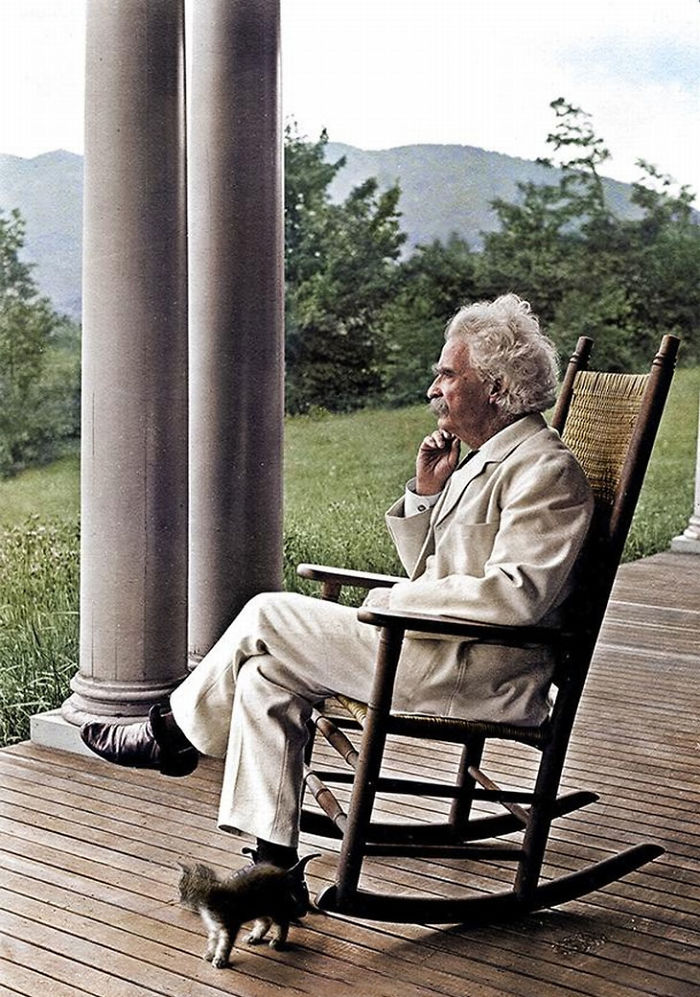 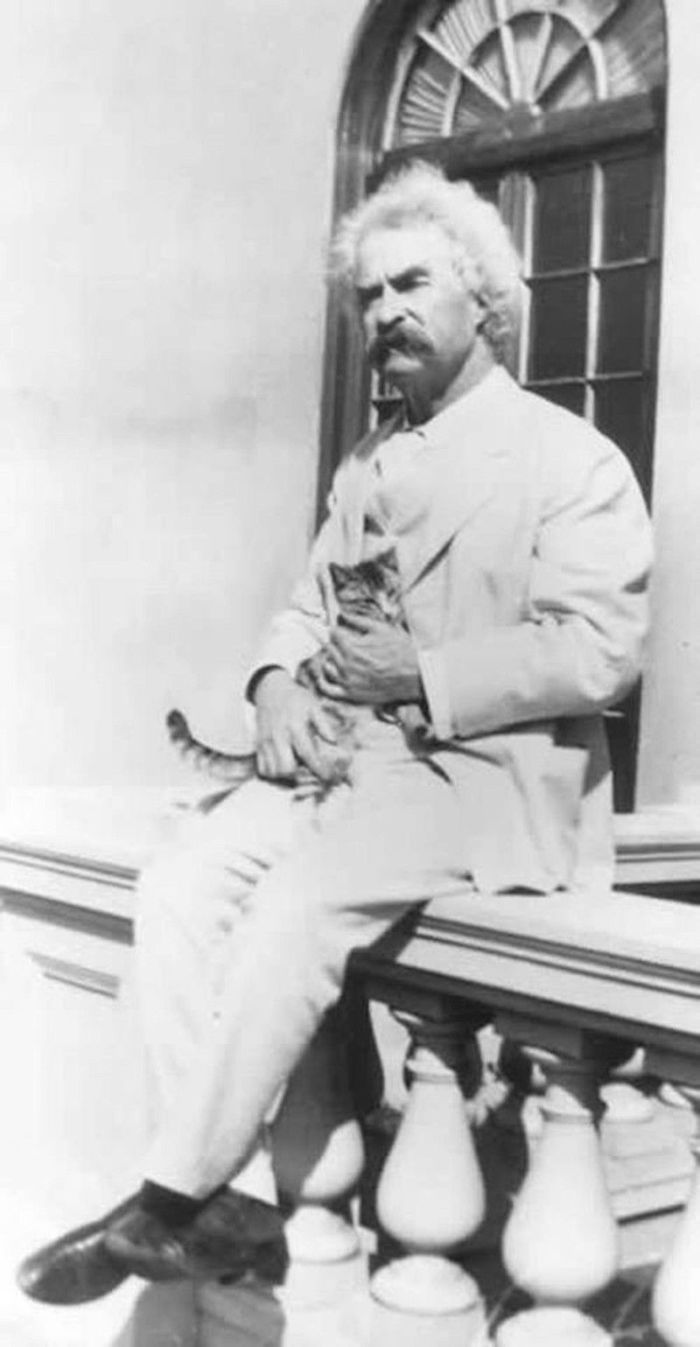 Twain had great for his cat Bambino, a cat who had originally been owned by his daughter Clara. After Bambino went missing, Twain used his pen in an attempt to find him. He took out an advertisement in the New York American offering a $5 reward to return the missing cat to his house at 21 5th Avenue in  New York City. Twain’s described his beloved pet as, “Large and intensely black; thick, velvety fur; has a faint fringe of white hair across his chest; not easy to find in ordinary light.” Bambino eventually came home on his own, but not before numerous people had turned up with cats that might match this artistic description. 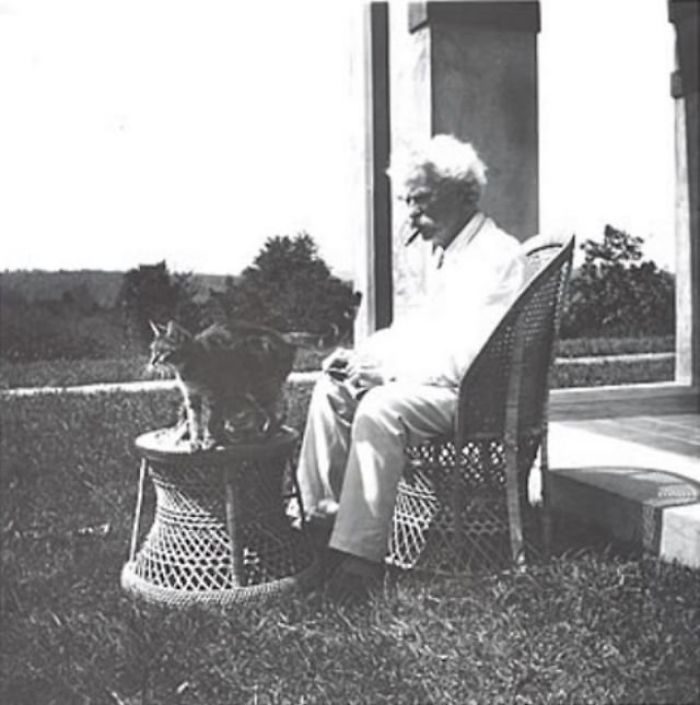 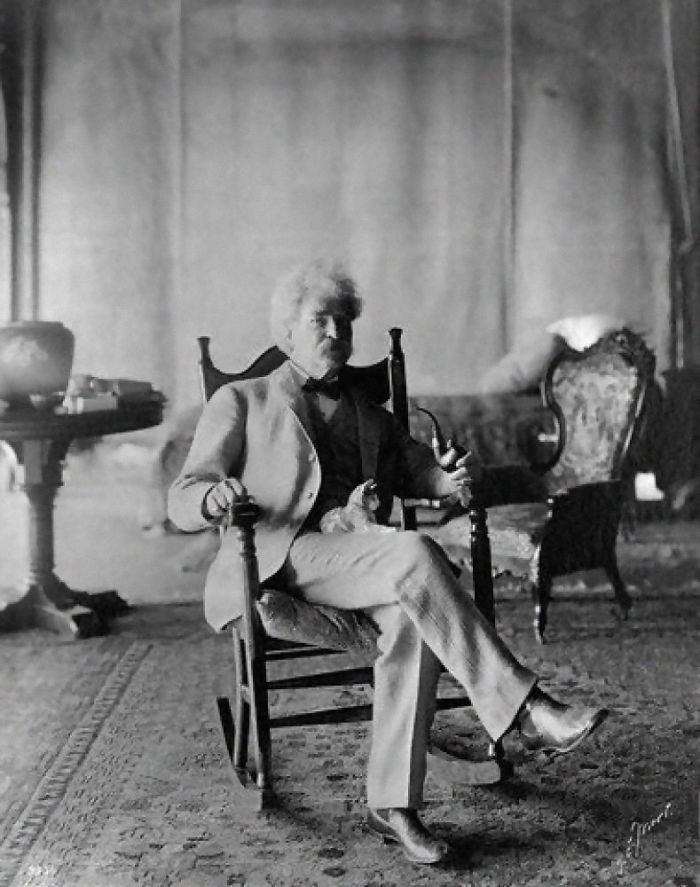 We’ll leave you with a quote from Twain’s 1894 novel Pudd’nhead Wilson: “A home without a cat — and a well-fed, well-petted and properly revered cat — may be a perfect home, perhaps, but how can it prove title?” 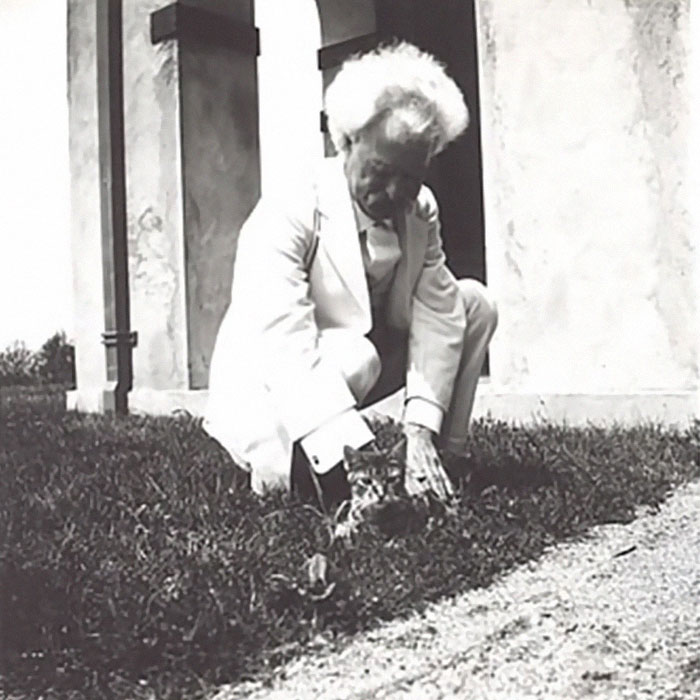